Can You Accept Baggage from Others, Based on Your Personality Type 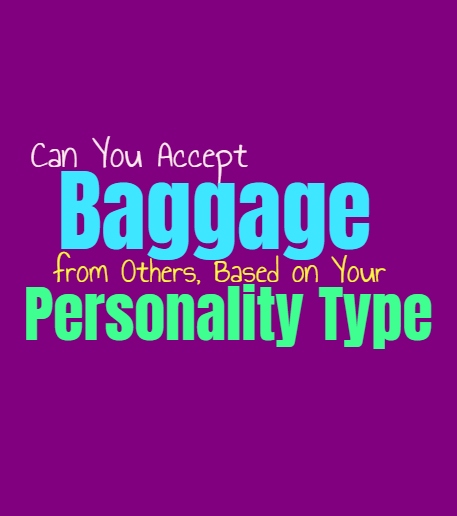 Can You Accept Baggage from Others, Based on Your Personality Type

It can be difficult to handle baggage when it comes from people we meet and interact with, but in truth we all have things we need to work through. No one is baggage free, but not everyone is good at handling these added things in their relationships. Here is how good you are handling baggage, based on your personality type.

INFJs often understand that people have baggage, and believe in being forgiving towards those individuals. They often see people for who they are inside, and sometimes ignore the baggage they might have. INFJs also have a tendency to want to help people and find ways to mend their hearts and their pain. They care about people and when they are drawn to someone they can often accept a lot of their baggage and try to be patient with them. INFJs only find it difficult to accept these things when someone continues to attack and abuse them, and eventually they will reach a breaking point.

ENFJs are often understanding people, and they also find themselves forgiving mistakes that people make. When they care about someone they are often drawn to them, and they might ignore some of the negatives they see. When it comes to the baggage of others the ENFJ wants to be able to help people solve these problems they are having, and care about making their lives better. ENFJs often find it difficult to walk away from someone when they care about them, and so they often take on a lot of baggage.

INFPs are often drawn to people without really focusing on how much baggage they do or do not have. Sometimes they are drawn to the mistakes even, or the flaws that they see and find endearing in people. For the INFP it is about seeing something special in a person, and so they don’t like walking away simply because someone might have a lot of emotional baggage which they need to work through. INFPs want to find someone who can accept their baggage, and so they believe in being open even though this can sometimes get them hurt.

ENFPs find it difficult to focus on the baggage someone has once they have already gotten to know their positive traits. When they start to develop feelings for someone or find themselves intrigued by their passion, it becomes difficult for them to really care about the baggage. They do sometimes get themselves into difficult situations because they don’t want to simply walk away from someone because they have a lot of baggage. For the ENFP it is about finding someone who can accept their own baggage, and work through it together.

INTJs understand that every person has some baggage, but they don’t want to settle for someone who isn’t capable of carrying this themselves. They are often drawn to people who are confident and strong, and are willing to grow and work on themselves. INTJs are more attracted to people who can find ways to navigating their own problems and want to actually find ways to solve these problems. For them someone who is a bit of an emotional mess because of their baggage, is really not appearing most of the time.

ENTJs are drawn towards people who are capable of handling whatever baggage they have without turning toxic because of it. They want to find people who are independent and capable, and who are willing to work on themselves and their problems. ENTJs don’t like emotional baggage, especially if someone is going to constantly be emotionally need and over the top because of it. They have a hard time with these types of breakdowns and really don’t know how to respond to or fix them.

INTPs don’t really want to overload themselves by taking on someone who has too much baggage, but there is sometimes a part of them which seeks to fix people.INTPs sometimes are drawn to these people with complex baggage, and find themselves analyzing the person and their problems in hopes of saving them or fixing whatever they have going on. This isn’t something they do intentionally, since on the surface they do want to find someone who is independent and does not have this type of baggage.

ENTPs often want to find people who have less baggage, since they don’t want to feel held back or tied down because of it. They enjoy people who are independent and find this very attractive in comparison to a lot of emotional baggage. At the same time ENTPs are curious people who are occasionally drawn to puzzles and people they need to figure out and solve. This can sometimes get them into relationships with people who possess more baggage than they can really handle themselves.

ISTJs are capable of handling and accepting that other people have baggage, but for them it depends on what the baggage is. They want to find someone who can work with them, not against them. ISTJs are searching for a partner and a companion who will help them through and be capable of growing and building and better future. They understand that people have baggage, they just don’t want to deal with baggage which holds them back and prevents them from having a future with this person.

ISFJs are often drawn to people who have a bit of baggage, wanting to do whatever they can to help them. They find themselves wanting to solve problems for people, wanting to save them from whatever is pulling them down. They are compassionate people who really just want to help and make a difference. When the ISFJ cares for someone it is often too late for them to notice the baggage they have, and so they can accept it and try their best to help carry it for them.

ESFJs do often find themselves drawn to people who have baggage, since they want to help. They are compassionate people and have a strong sense of empathy, which makes them want to help and do what they can to fix people. When the ESFJ cares for someone it is almost impossible for them to walk away, it takes reaching a serious point for them to give up just because someone has baggage which is challenging.

For the ESTP someone who has so much baggage it holds them back, is really not appealing. They aren’t interested in finding people who are perfect, since they realize this is impossible. They can certainly accept baggage but it has to be baggage which works with their own. They just don’t want to take on someone else’s baggage and find that it prevents them from going after what they want and takes away their sense of independence.

ESTPs don’t really like dealing with baggage, especially if it holds them back or prevents them from living their lives. While they might find themselves not wanting to deal with baggage in theory, they do sometimes end up drawn to it. ESTPs fall for people who challenge them and keep them interested, which can cause them to go for people who have a lot of baggage and they just didn’t realize this at first.

ISFPs don’t really focus on how much baggage someone has, but rather how they feel about that person. When they care about someone they are often willing to accept the baggage and do their best to work with them. ISFPs follow their hearts and this does sometimes get them into sticky situations, but they are willing to deal with it. They just want to do what feels right, even if that means falling for someone who is a bit of a mess.

ESFPs don’t really focus on whether or not someone has baggage, since sometimes they are drawn to a bit of trouble. ESFPs go with what feels right inside, and care about following their hearts. When they are passionate about someone they want to connect, even if it seems like a bad idea to someone else. For them baggage is a part of life, and they are willing to accept this as long as it doesn’t hold them back.