How Do You Handle Miscommunications, Based on Your Personality Type 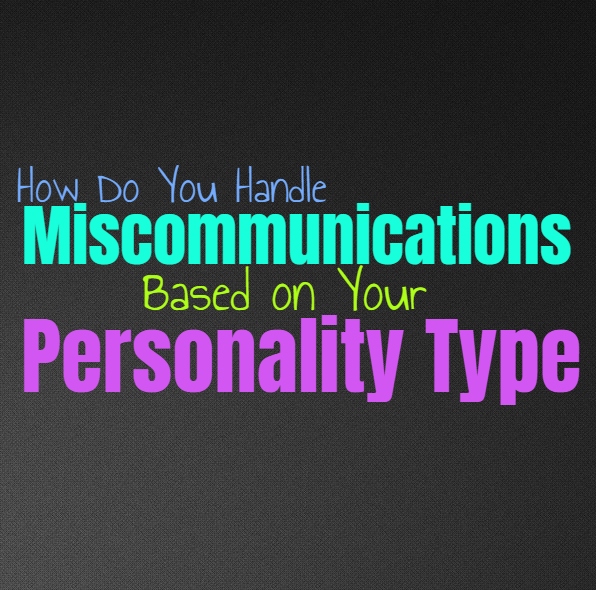 How Do You Handle Miscommunications, Based on Your Personality Type

INFJs can become a bit internally frustrated when they witness miscommunications, especially when they can easily see how things could have gone differently. If they are part of the miscommunication, then they will do their best to take a step back and find a way to make things a bit clearer. INFJs do sometimes feel frustrating in these situations though, especially if they are trying to communicate with someone who simply doesn’t understand them or their approach. INFJs do often feel misunderstood by others and so this can be something that causes them to just want to back away from the situation, rather than push to make people understand.

ENFJs often try to handle miscommunications by finding ways to make people understand one another. ENFJs are capable of searching for different means of expressing themselves, so that people can actually reach and understanding of their intentions. ENFJs are also good at trying to understand others, even when they aren’t doing a great job at communicating clearly. ENFJs realize that communications is important, and so they are often willing to take a step back in order to get this situation right.

INFPs can become frustrated with too much miscommunication, especially as it pertains to themselves. They do their best to be sincere and open people, and so changing how they express themselves doesn’t really make that much sense to the INFP. While they do understand being sensitive to others, having to change the way they word things or express their feelings, is likely to destroy the integrity of what they are trying to convey. INFPs just want to be around people who can understand them, and who don’t constantly struggle to properly communicate with them.

ENFPs don’t always know how to best respond to miscommunications, mostly because they express themselves the only way they know how. ENFPs say what they are feeling and what is on their mind, and so they don’t like having to twist this or edit things to make others understand better. At the same time the ENFP might not always know how to adjust the way they are expressing themselves for the sake of others, since they are often being as sincere as they can be and that just the best way they can thing to make their intentions known.

INTJs do their best to use facts in any given situation, and so it is difficult for them to really comprehend why this would turn into a miscommunication. INTJs understand how to break things down if they need to, in order to make their point clearler. They don’t add fluff or try to express things in an overly complicated manner, which definitely helps them to clear things up and avoid confusing people. For INTJs it is best to problem solve and find ways to make the conversation clear so that people are no longer ignorant or confused.

ENTJs try their best to be clear and concise in order to avoid miscommunications. If someone is not expressing themselves clearly they do their best to break things down in order to understand what is going wrong. ENTJs won’t waste too much time on someone who simply cannot get things straight though, and can actually become annoyed with this lack of efficiency. ENTJs do their best to break things down so that their intentions and points are very clear and easy to comprehend.

INTPs can sometimes struggle with miscommunications and having people lack understanding towards them. They have so much going on inside of their minds and sometimes their patterns and thought process can be hard for people to really follow. INTPs often prefer to just express their thoughts and conclusions, without having to explain how they got there. Having to explain their path can be the exact things that causes miscommunications, since it can be challenging for them to really explain this.

ENTPs often try to express things in a clear and factual manner when miscommunications are occuring. Instead of getting frustrated they simply do their best to make things clear and concise. For the ENTP it can be important to rectify these situations if the things people are trying to communicate are actually valuable and sincere. ENTPs will do their best to break down this information and make it as understandable as possible. They do realize though that sometimes people simply cannot connect or understand one another, and so it isn’t always worth their time and energy.

ISTJs try their best to be clear and factual in the way they express themselves, and so miscommunications can be frustrating for them. They will simply attempt to break things down and explain their point in a different direction, so that people can understand it a bit better. If the ISTJ is the one struggling to understand someone else, they can become annoyed if this person is not willing to find others ways of expressing themselves. ISTJs use facts and logic, and so they often require this way of communicating when someone just isn’t expressing themselves clearly.

ESTJs believe in being clear and concise in the way they express themselves, and so they don’t like wasting time with miscommunications. If someone simply cannot understand the ESTJ, they will break things down in a more helpful manner, but they don’t want to continue to doddle if this person just isn’t following. They know that they are efficient and factual, and so there is only so much they can do with someone who just isn’t capable of following their reasoning.

ISFJs do their best to connect with others and express themselves clearly. When there is a miscommunication the ISFJ simply wants to find a way to make everything more clear so that whoever is confused can come to an understanding. They believe in keeping the peace, and so this often means finding ways to rectify any miscommunications. ISFJs are good at understanding people and do their best to connect with their emotions in order to find ways to explain things a little bit more concise.

When a miscommunication occurs ESFJs often want to find a way to make things a bit clearer. They want to connect with others and find a way to understand their intentions and where they are coming from. When things get a bit confusing the ESFJ often takes a step back and does their best to figure out where they can break things down a bit better. As long as they aren’t personally upset or emotional, the ESFJ can be great at fixing miscommunications and making things a bit clearer.

ISTPs are often factual people and they don’t like speaking in a way that can be confusing. When they express something it is often clear and concise, so if someone misunderstands this then they really cannot blame themselves for it. When there are obvious miscommunications around them the ISTP is often capable of finding ways to break down the situation so that people understand what is really going on. They will do their best to solve the problems, but if people aren’t receptive they aren’t going to waste their time.

When there are serious miscommunications going on the ESTP can sometimes try their best to problem solve. If they aren’t personally involved they often do better at mediating and breaking things down so they make more sense. When the ESTP is part of the miscommunication it can be hard for them to step out of it, especially if they are emotionally invested for some reason. They try to be clear and concise but there are times when they get caught up in the moment a bit too much.

ISFPs do things based on their emotions, and so sometimes this can cause miscommunications. They want to express themselves clearly but they follow their hearts and really cannot do much to change this. When the ISFP expresses their thoughts and feelings they are doing this in the most sincere way they know possible, and so if someone is confused it is challenging for the ISFP to really rectify this.

ESFPs follow their hearts and live very much in the present moment, this can actually be something that causes miscommunications in their lives. ESFPs do whatever feels right and it really isn’t natural for them to adjust the way they express themselves. They often don’t know any other way to make themselves clear, since they are speaking from the heart and following what feels right for them. For the ESFP miscommunications can be hard for them to really clear up, and so they often need someone to assist in this.