Here’s How Much of a Busybody You Can Be, Based on Your Personality Type 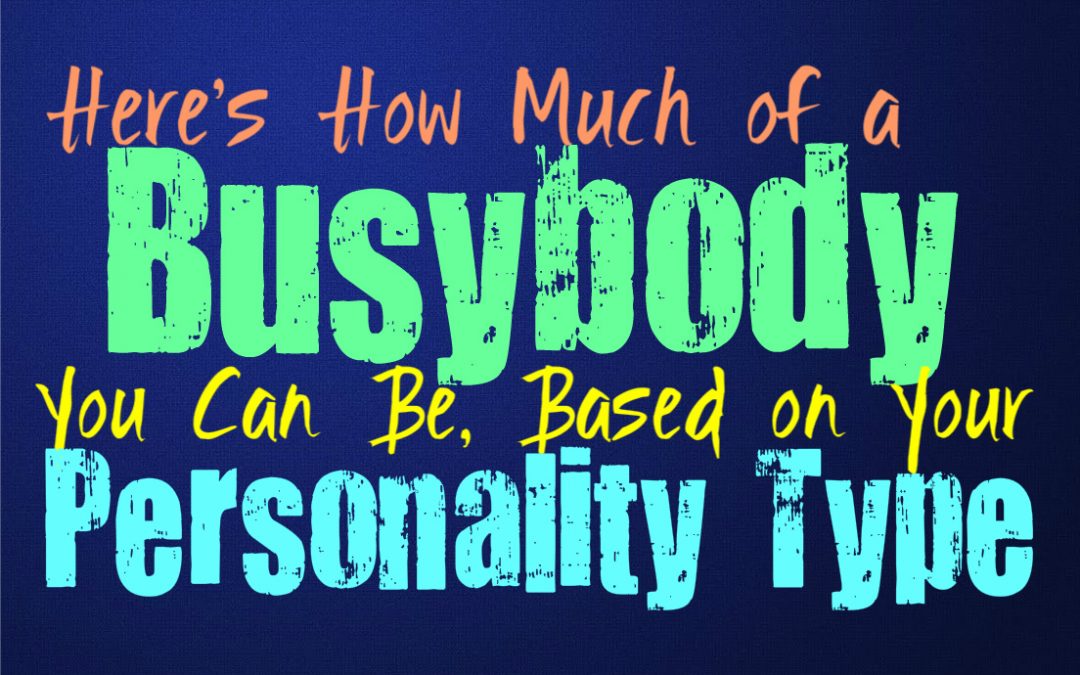 Here’s How Much of a Busybody You Can Be, Based on Your Personality Type

Busybodies are the type of people who enjoy a bit of gossip, and always have their nose in other people’s business. While it does have a bit of a negative stigma attached to the term, anyone can possess a small amount of this quality naturally that they might be able to overcome. Here is how much of a busybody you can be, based on your personality type.

INFJs don’t like to be the busybody types, and often try to keep their noses out of other people’s business. There are some INFJs who seem drawn to meddling though, simply because they care so much. When the INFJ seems like a busybody it is simply because they are trying to figure out the best way to make their loved ones happy. Sometimes getting into the personal business of others is the only way to really help them. Most INFJs won’t do this unless the person asks for their help though, otherwise they like to give people the space they need.

ENFJs can definitely be busybodies at times, but this often comes from a place of caring. They simply are connected to people and want to do whatever they can to make others happy. Sometimes the only way the ENFJ can really make a difference in the lives of others, is to be a bit nosey. In order to help the ENFJ needs all of the information, which sometimes requires them appearing like a busybody or a snoop. They do this because they care and don’t want to be left out of pertinent information which could help them really make a difference for their loved ones.

INFPs are rarely busybodies, simply because they enjoy having their own space. They don’t like sticking their nose in others people’s business in most situations and would rather give people a chance to share if they want to. INFPs won’t be the ones constantly sticking their nose into the business of strangers, and often find people like this to be a bit annoying. When the INFP can appear like a busybody, it is only because they are trying to understand someone better. This is when the INFP wants to learn about someone new who they might be romantically interested in, since they value being able to understand this person.

ENFPs definitely aren’t busybodies since they prefer to mind their own business. They are more focused on their loved ones and connecting with them on a personal level. ENFPs are definitely curious about others, but they don’t seek out information in a gossipy manner. They simply express their interested in an open and sincere way, and are naturally good at getting people to open up. ENFPs can appear like busybodies at time, especially since they are highly interested in their loved ones. For the ENFP it is more about showing that they want to understand the people in their lives.

INTJs definitely aren’t busybodies and become truly frustrated with people who are. They enjoy having clear boundaries and believe it is important to maintain space between themselves and others. When people try to encroach on the INTJs privacy they can become rather defensive and annoyed by this. They also believe in extending this same level of respect to others, and rarely do they find themselves all that curious about others. For the INTJ being a busybody means sticking their nose in where it does not belong, and this simply isn’t a quality they possess.

ENTJs really aren’t the busybody types in most situations, and would often prefer to maintain a sense of space. While ENTJs like their independence there are times when they feel the need to learn more about others. This often happens in a business related situation, or when the ENTJ is trying to connect with their community. In these situations it is more about learning than it is about being unnecessarily nosey. They value being able to learn and understand about their surroundings and sometimes this includes the people they are working with.

INTPs aren’t busybodies and often prefer to maintain a sense of space and independence. For the INTP sticking their nose in other people’s business can feel a bit childish, especially since they hate it when other people do it to them. Sometimes INTPs do like to observe others though, especially someone they are romantically interested in. They will likely research them to learn more about who they are and what they enjoy, which can seem a bit like they are being nosey. At the same time INTPs are often good at keeping their research quite, and aren’t the obnoxious type of busybodies.

ENTPs aren’t really busybodies, but they are extremely curious people. They aren’t interested in gossip or unnecessary drama, but at the same time the ENTP enjoys being able to learn about their surroundings and sometimes this includes people. They simply want to understand more about how people operate, especially when it comes to their loved ones. They express this curiosity by pushing buttons and crossing certain boundaries, which can seem a bit like they are meddling.

ISTJs don’t like to meddle in people’s lives, but at times they can become curious. The only reason ISTJs will take interest in a busybody way, is simply because they want to become a valued member of their community. The ISTJ might become curious about the people around them, and enjoy learning about them and what they like. This comes from a sincere place with the ISTJ, and likely doesn’t make them seem like busybodies.

ESTJs can seem like busybodies sometimes simply because they want to become valuable members of their community. They often become interested in the people around them and want to learn what makes them tick. ESTJs can also be competitive people, which is why they can be a bit curious about the people they are in competition with. This can make them seem like busybodies at times, but the ESTJ is often good at getting the information they need.

ISFJs can sometimes seem like busybodies, simply because they are curious about their loved ones. They will take a personal interest in someone they are connected to, and this can sometimes seem like meddling. ISFJs want to be able to help others and sometimes this requires them to stick their nose into their business in some ways. Sometimes the ISFJ needs to learn about others in order to protect the people they love, and this makes them appear like a busybodies sometimes.

ESFJs are truly focused on caring for their loved ones, which can actually make them seem like busybodies sometimes. They aren’t gossips, but they do take an interested in the people around them. Sometimes the ESFJ needs to learn more about certain people in order to help them and better their lives. They often do this in a way that can seem like they are meddling a bit, but it truly comes from a good place. ESFJs care deeply for their loved ones and want to do whatever it takes to make them happy.

ISTPs are not busybodies, and actually prefer to remain distant from most people. They like having their own space and take a while to really connect with others. When the ISTP cares for someone they will certainly take an interest in them, but they also believe in giving them their space. ISTPs aren’t fans of smothering behavior, which is why they definitely don’t enjoy being around busybodies.

ESTPs are complex people and at times they can appear like busybodies. While ESTPs do enjoy having their independence and want to give others space, there are times when they become overly invested. When the ESTP cares about someone they can become truly attached and might want to learn everything they can about them. When this happens the ESTP can seem like a busybody trying to learn about that person and everyone they are connected to.

ISFPs can sometimes seem like busybodies, simply because they are highly interested in people. They enjoy learning more about those around them, and sometimes this means prying a little bit. They don’t like to cross boundaries, but the ISFPs don’t always realize they are doing this.

ESFPs care about others, and are naturally very curious about the people in their lives. Sometimes they can appear like busybodies, since they can occasionally meddle. For the ESFP this is simply because they live so much in the present moment and want to explore the lives of those around them. They care about others, and at the same time ESFPs are extremely curious people.