Do You Have a Strong Presence, Based on Your Personality Type 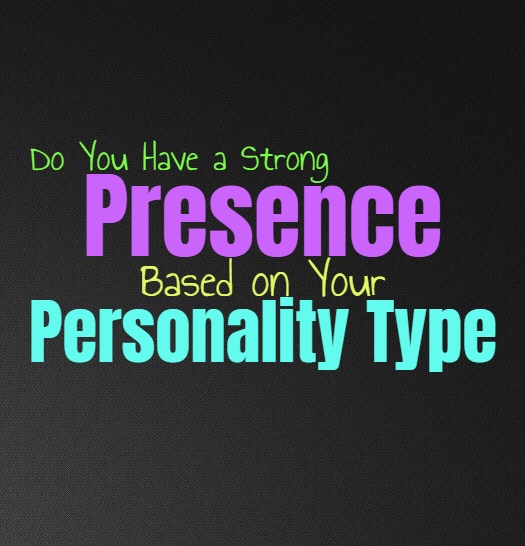 Do You Have a Strong Presence, Based on Your Personality Type

Some people have a naturally strong and noticeable presence when they enter a room, while others might prefer to be a bit more subtle. Some people want to be the wallflower, so that they can notice what is going on around them without being the ones others pay attention to. Here is how strong your presence most likely is, based on your personality type.

INFJs are complex people who can often go either way as far as their presence goes. There are times when they prefer not to be noticed, and would rather not draw attention to themselves. INFJs can be good at this, at going unnoticed and trying to be more subtle in an environment. This doesn’t mean they don’t have a naturally strong presence though, since most INFJs actually do. They are very enigmatic and complex people, with personalities which can truly draw others in and make them feel mesmerized. When INFJ wants to have a powerful presence and make themselves known to a group of people, they are often very capable of this.

ENFJs do often have a naturally strong presence, since they are outgoing and rather unique people. Their personalities often draw others in, and they have a knack for making others feel comfortable around them. ENFJs can sometimes have these larger than life personalities, wanting to bring others together and really connect with them. Their desire to please everyone around them and be someone that people like and enjoy, is definitely part of what creates such a strong presence for the ENFJ.

INFPs are often seen as the wallflower types, but this is almost always by choice rather than unintentional. While INFPs can be seen as shy and withdrawn to some, this does not describe the true personality of most INFPs. They are often drawn to being performers, with a presence which can draw others in and leave them feeling enamored by the INFP. When they have some sort of artistic abilities they want to express to the world, this often makes their presence a rather strong and lovable one.

ENFPs often have a naturally strong presence, unafraid to enter a room and demand attention if they want to. ENFPs are outgoing people who also have quite a bit of natural charm which helps them draw others in. They don’t like going unnoticed and are often naturals at getting attention from the world around them. ENFPs are often charismatic people which helps them to create a strong presence in almost any situation. The way they express themselves and often appear rather open, makes the ENFP even harder to ignore.

While INTJs might not be outgoing or over the top people, they still have quite the strong and noticeable presence. INTJs don’t have to speak constantly to create this type of presence in the room, instead it often comes from their demeanor and the few words they do decide to speak outwardly. They are seen as intelligent and strong-willed people, even a bit stubborn in most situations. They aren’t afraid to express the facts, and won’t simply back down people someone else tries to force them. INTJs have a strong presence simply by the way they hold themselves and the way they value information and truth.

ENTJs do often have a strong presence in just about any situation. They are determined and somewhat stubborn people, and the way they go after what they want is impossible to miss. ENTJs are often very focused people with a desire to always be as efficient as possible. They are also outgoing and unafraid to express their point of view. These traits create a very strong presence for the ENTJ, making them someone that others notice almost immediately.

INTPs like to keep to themselves most of the time, wanting to maintain a more low profile in most situations. They don’t want to create a strong presence because they would rather be the person that others underestimate and don’t see coming. For the INTP being someone who draws attention can be draining, even though they do have rather enigmatic and captivating inner minds. INTPs just don’t always feel like sharing this with others, and so they try to avoid getting noticed too much. If the INTP is deep in though they can have a sort of intense and distracting presence in the room, but not intentionally so.

ENTPs do have rather larger than life and outgoing personalities, and so they do have a strong presence most of the time. ENTPs can enter a room and gain attention from others fairly easily, especially since they have active senses of humor. ENTPs enjoy being able to navigate new situations, sometimes creating a rather noticeable and strong presence. This often depends on their mood and what they are hoping to gain from a situation. If the ENTP feels like blending in might be more effective than this is what they will do.

ISTJs don’t like being someone who demands attention, and so they try to focus on doing their own thing. Most of the time their presence will seem a bit more subtle and determined, rather than strong or prominent. ISTJs often prefer to have things this way, since they would much rather people underestimate them until it is too late. They don’t need to constantly have attention from others in order to feel fulfilled, instead they prefer to focus on getting their work done without having others invade their privacy. ISTJs can have a strong presence when they make themselves known or when they are expressing their knowledge about something.

ESTJs are often outgoing and very determined people, and their sense of directness can certainly provide them with a strong presence. When the ESTJ is trying to get something done they won’t allow anything to stand in their way. This sense of focus and determination can certainly be intimidating to others, lending to the ESTJ rather strong presence around others. They would rather be aggressive and direct people, rather than hold themselves back for the sake of others.

ISFJs aren’t really interested in having a strong or overbearing presence, they would rather be someone who makes others feel at ease. They are empathetic people who want to create a sense of harmony in their environment. ISFJs might not have a strong presence, but this is often intentional and exactly what they prefer. They don’t want to be someone who makes others feel overwhelmed, instead they seek to help those around them. ISFJs are focused on tending to the needs of others and working towards accomplishing their practical goals in life.

ESFJs are often capable of having a strong and charismatic presence, but most of the time they prefer to take a step back. They don’t want to overpower people or make them feel uncomfortable around them. ESFJs have a strong sense of empathy and so they often want to find ways to make others feel at ease in their presence. They care about people and want to do whatever they can to please them and make them happy.

ISTPs do often have their own unique presence, since they have personalities which appear rather mysterious to others. ISTPs keep to themselves and seek to live by their own rules, and this can create a somewhat prominent presence to most people around them. People will notice that they like to keep to themselves, but at the same time have charming personalities. This can be something which draws others in, even when that is not what the ISTP intends.

ESTPs do have rather noticeable presence around others, although not necessarily strong in the practical sense. They don’t want to overpower people or seem like they are trying to control them. Instead ESTPs have charming personalities and often seek to be liked by others. Their presence is often noticeable but not necessarily over the top, unless that is what the situation calls for. They do enjoy gaining the attention of others but they don’t want to be someone who makes people feel uneasy.

ISFPs don’t really like having an overbearing or strong presence, since they do keep to themselves a lot. They prefer to focus on their loved ones and following their own path in life. ISFPs don’t need to create an over the top or strong presence in order to feel accomplished. For them this can feel a little bit overwhelming, since they don’t want to constantly have people pressuring them or expecting things from them.

ESFPs do often have a strong presence, since they are outgoing and sometimes demanding people. They enjoy being the center of attention and are not afraid of making their presence known to others. They enjoy being liked by those around them and want to find ways to gain new connections. ESFPs live in the present and are not afraid of speaking their minds in any given situation. If they want to do something they often follow what feels right, and this outgoing and adventurous part of them often creates a strong presence for the ESFP.