Here’s How Easily You Can Fade Into the Background, Based on Your Personality Type 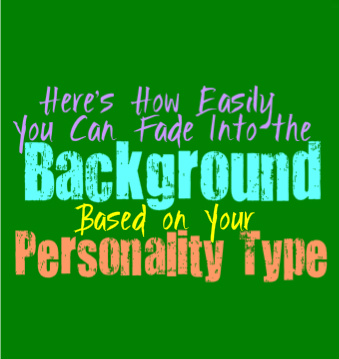 Here’s How Easily You Can Fade Into the Background, Based on Your Personality Type

INFJs are definitely capable of fading into the background when they want to. They enjoy being around others but they ultimately reach a limit with social interactions. When the INFJ is beginning to feel drained, they will do their best to fade out of the conversation and become the wallflower. It can be challenging sometimes but they can often find the right distraction in order to slip out of the conversation. They simply need time to themselves and would become quickly exhausted if they weren’t capable of fading into the background in some situations.

ENFJs don’t really find it all that easy to fade into the background, and are often rather noticeable. They can have somewhat larger than life personalities, and enjoy being able to connect with others. ENFJs don’t like having to fade in the background, and prefer being noticed by others. They simply want to be able to feel close to the people around them, and don’t want to have to water down their personality. ENFJs are warm and compassionate people, who truly want to be seen by the ones they care for most.

While INFPs can have charismatic and comedic personalities, they are also capable of fading into the background. INFPs can sometimes be seen as more outgoing, which makes it surprising to some that they are introverts. They can be very entertaining and fun people, but they simply reach their limit when it comes to social interaction. When the INFP is feeling drained they will often try to fade into the background and find a way to slip away from all of the noise.

ENFPs don’t really like having to fade into the background, most of the time they enjoy being center stage. They are social and outgoing people who love being around people they can connect with. ENFPs do enjoy time by themselves, but they can often acquire this without having to fade away from the group and will simply wait until they are alone later on. ENFPs are often social butterflies, finding it very easy to be charming and draw in the attention of those around them.

INTJs can definitely fade into the background when they need to, and sometimes this is exactly how they prefer it. They don’t like having to interact too much and can become quickly drained by too much socializing. INTJs often enjoy being able to observe from a distance, simply paying attention to how others are responding and learning from the environment. INTJs enjoy debating and interacting with people to some extent, but they often need to find a way to fade into the background in order to recharge.

ENTJs don’t really find it natural to fade into the background and often enjoy being able to interact. They learn from communicating with people and want to pay attention to their responses. Sometimes do like being the fly on the wall though, and will try to draw less attention to themselves in order to observe others. Most of the time ENTJ enjoy being center stage and love being able to entertain others. They can be talkative people when they are in social situations, enjoying the chance to connect with people and get to know them.

INTPs definitely can be the fly on the wall in many situations, since they enjoy observing. There are times when they seem to be completely distracted, but they are actually paying attention to everything. They can be underestimated because of this, and they often don’t mind that at all. INTPs can often pay close attention to what is going on around them and will try and use this information to learn and understand people and situations better.

While ENTPs are charismatic and outgoing people, they do sometimes take the opportunity to make their presence less obvious. ENTPs will take advantage of the chance to observe others and pay attention to how they are behaving in a social situation. They are always looking for ways to learn and sometimes this requires paying attention from a distance instead of getting up close. They like being able to switch gears, going from being immersed in the conversation, to being the fly on the wall.

ISTJs can certainly fade into the background and make their present less known. They often prefer having it this way, and would rather observe than be in the center of things. They can sometimes appear shy simply because they don’t want to interact all that much. ISTJs aren’t shy, they just would rather keep to themselves and can become quickly drained by other people. They need be able to have enough space to recharge and not feeling crowded by others.

ESTJs don’t like fading into the background most of the time, instead they want their presence to be known. They often prefer to take things on with a sense of directness and even aggression, instead of being subtle. ESTJs don’t like having to water down their personality, and would much rather focus on doing things their own way. ESTJs don’t often see the need to fade into the background, especially when there is something they could be doing better themselves.

ISFJs can certainly fade into the background, especially if someone they love wants the spotlight. They enjoy being able to make others happy, and rarely want to be the center of attention themselves. ISFJs actually enjoy being able to observe their loved ones enjoying themselves, without having to fully get in the middle of things. They do require time to themselves in order to recharge, and too much social interaction can be a bit overwhelming for them.

ESFJs can certainly fade into the background, especially for someone they love. If someone they care for really wants the spotlight, the ESFJ is often more than capable of giving this to them. They enjoy watching their loved ones shine and don’t always feel the need to be center stage. ESFJs do like being able to connect with others, and often want to be in the middle of the conversation. They are adaptable people who can switch back and forth depending on what is required of them.

ISTPs can certainly fade into the background, and often prefer it this way. They can give of a mysterious vibe with their demeanor sometimes, only interjecting when they feel a strong desire to. They do enjoy being able to inform people, and will step out of the shadows to give correct information. ISTPs simply prefer being on their own most of the time, since they become drained quickly by most people. They will enjoy being around the ones who do not drain them as much, but they are rarely chatty people.

ESTPs don’t really like fading into the background most of the time, and can become sad when this happens. They enjoy connected with others and are naturally social people. ESTPs simply want to have fun and utilize their charm in order to draw in attention. They live in the moment and want to seek out what makes them happy, they simply don’t like feeling stuck in the same position for too long.

ISFPs can sometimes fade into the background naturally, but this depends on who is around them. When they are with the right people they can become the center of attention, enjoying the energy they give off. If the ISFP is around people who make them feel uneasy or drains them quickly, they will want to fade into the background. For ISFPs it is often about the energy they feel around them, and what it inspires them to do.

ESFPs really aren’t ones to fade into the background and can often find this challenging. They hate feeling ignored, as this is actually one their biggest fears. ESFPs prefer to be center of attention, and want to be able to feel surrounded by their favorite people often. They become drained if they are alone or ignored for too long, and feel depressed by this. ESFPs aren’t likely to fade into the background, they are more likely to take center stage.