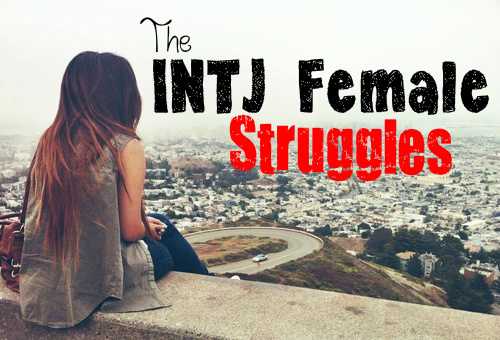 Meeting an INTJ is a rare occurrence, meeting a female INTJ is almost impossible. Being rare SOUNDS like an unbelievably appealing thing. We are often drawn to things that are unique and unlike anything else. Even though it is a wonderful thing to be so special, it can be alienating and challenging. The INTJ female is independent, strong-willed and intellectually driven. She is certainly one of a kind, making her easily misunderstood by others. There are many struggles that the INTJ female has to face, being that she is so very uncommon.

They Don’t Fit Into the Female Stereotype

The female INTJ basically abolishes the idea of the gender stereotypes. She is strong, independent and very much inside her own analytical mind. She enjoys knowledge, constantly striving to better herself. The INTJ woman is not seen as emotional often separating her from the “girly” or “flighty” image that some women can be prone to. She stands up for herself and is not afraid of being seen as harsh. INTJs are a proud breed, able to help eliminate some of the unfair stereotypes placed on women. She is a capable leader, although she doesn’t choose to lead unless she has to. The INTJ female wants to absorb as much knowledge as possible, making her a master of her own fate.

Being so different from the stereotypical image of women, is definitely a wonderful way to help better society’s ideals towards women. Even though their uniqueness is a good thing, it is not always easy for them. Being the person to stand out can be rather challenging at times. Many people do not understand the female INTJ, wanting her to fit into the typical female role. She may struggle with men not respecting her for her independent thinking. It is not easy being a woman who is often more capable of leading or getting things done than most men. Men are typically viewed as the logical ones, making women their emotional counterparts. The INTJ woman is not at all emotional or whiny, she is intense and logically driven. She often understands complex problems better than most people around her, men included. This can cause for many power struggles, but the INTJ woman will rarely back down. Even though she will push through it, this can be very challenging for her at times. It is important to INTJs to be valued for their intelligence, wanting others to respect how hard they work and how much knowledge they have gathered. Having to deal with people doubting their natural abilities, is intensely frustrating to the INTJ.

INTJs women are constantly working on growing as individuals, they also work on pushing others around them. They will not back down and are constantly seeking to reach a better understanding. Regardless of their adversaries the INTJ female is a formidable intellectual beast. She knows what she wants and is more than capable of going after it. The INTJ women often faces more struggles than most people, being that her goals are often alongside those of power-hungry men. She does not fear people who puff their chests, but rather wants to come at them full-force. The INTJ woman is misunderstood because of her ability to stand against people who appear “bigger” than her. She knows her intelligence, making her completely confident in her ability to overcome challenges.

The way that the INTJ woman thinks, often challenges others in ways that can make them uncomfortable. People may become uneasy with the way that the INTJ female pushes them beyond their limits. She isn’t someone who is content to sit back and watch other people succeed. This often drives others around her to want to be just as successful. Being so intellectually driven can often alienate the INTJ female from people who are not used to such a strong-willed woman.

They Are Independent Thinkers

The INTJ woman does not depend on others to develop her ideas. She thinks entirely independent of popular opinion, making her often stand out from the crowd. Instead of bending to what the masses follow, the INTJ female wants to weigh the options on a more intelligent basis. She searches for truth, weighing all of the facts and processing them internally until she figures out the best possible answer. The INTJ female is very open-minded, willing to hear other people’s thoughts on different subjects. In the end though, she figures out the answers on her own, without bending to the emotional beliefs of others.

She hungers for knowledge, wanting to gather as much information from her surroundings as possible. The INTJ woman often spends much of her time alone, enjoying what the solitude has to offer. This can be challenging since she may be expected to be the social and “bubbly” female that most women are. She doesn’t fall into that category, wanting to be free to do her own thing without pressure. This doesn’t mean that all female INTJs are “tomboys” at all. Many INTJ women can enjoy stereotypically “female” activities and externally may not appear any different than other women, she just doesn’t fit into the typically emotional category of most women. She wants to do things on her own terms, deciding what she likes internally and not basing it off of popular opinion. Growing up this attitude may have been a struggle for the INTJ female. If she was raised by a mother who enjoys fitting into the female stereotypes, the INTJ would have certainly struggled to be understood. Being an intellectually driven female definitely has its struggles and having a parent who does not understand that this is perfectly “normal”, can make it even harder.

Friendships Can Be Tough

The female INTJ may find herself more comfortable being friends with males. This is simply because she needs more space than most women are willing to give. She doesn’t want to be in constant contact, often needing time to herself to think. If she is surrounding by women who cannot accept her differences, she will become very frustrated. The INTJ female needs friends who can understand her needs, as well as respect and love how unique she is. She needs to be able to find friends who will share her interests and keep up with her intellectual conversations. She will become bored with women who want to chatter about shallow topics that simply do not interest the INTJ.

Her confidence can often alienate the INTJ from other women with insecurities. She isn’t plagued by the emotional anxiety that many women suffer from. The INTJ female sees herself accurately, and knows how to achieve her goals. She is strong and independent, which can alienate her from other women. In some cases though the INTJ can be lucky enough to find women who are similar to her in many ways, making her feel comfortable to be herself. There is nothing worse than when an INTJ female feels like she has to pretend to be something else.

Relationships Can Be Challenging

INTJ women can face challenges in romantic relationships because they may actually be less emotionally expressive than their partner. Most people are used to women who are emotional and bubbly, while the INTJ is neither of those things. She is confident and prefers to keep her emotions to herself, rather than vomiting them onto others. She is very internal and private about how she feels, often taking a long time to warm up to others. This doesn’t mean that the INTJ woman does not want romantic connections, or that she doesn’t feel emotions. She actually feels things very deeply, she just doesn’t express this easily. Over time she may become more capable of opening up to someone, but this takes patience and trust. She will never be the stereotypically romantic and gushy female that most people are used to, but she can be a wonderful partner. INTJs are loyal and deeply caring individuals towards those they are close to. They go out of their way to make sure that they understand their partner on a deeper level. People who are comfortable in their own skin will be intrigued and enticed by the incredible mind of an INTJ woman. She may not be typical, but who wants that anyways? For someone who is looking to be challenged and mentally stimulated, the INTJ woman is a wonderful and rare find.

You Are In Good Company

Although the INTJ female makes up around 1% of the population (INTJs making up on 3%) there are a few inspiring celebrities that share this type. Celebrities such as the talented author Jane Austen, actress and businesswoman Ashley Olsen and businesswoman and presidential candidate Carly Fiorina. Remember that even though you are rare, you are in excellent company.

INTJ Problems: 13 Ways You Are an INTJ

The Important Reasons Why We Find INTJs Truly Fascinating

The Struggles of Being An Outgoing Introvert