ENTP Broken Trust: Dealing with Trust Issues as an ENTP 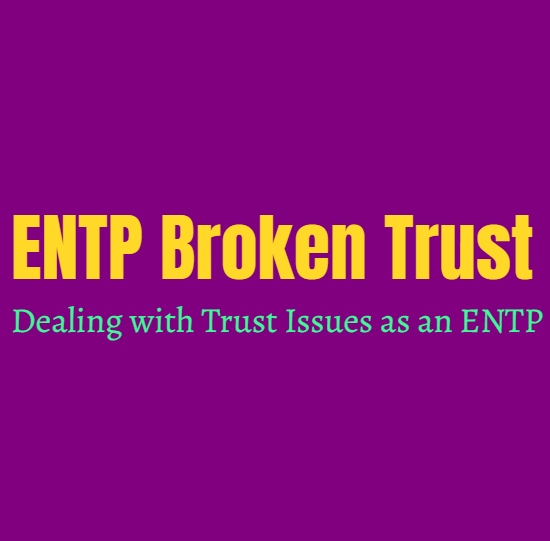 ENTP Broken Trust: Dealing with Trust Issues as an ENTP

ENTPs do sometimes struggle when it comes to trust issues, since they can be hesitant to really rely on people. They prefer to focus on things which are rational, and so they might find themselves considering all of the angles before actually trusting someone. They can be somewhat protective of their own feelings, as well as their independence. The idea of opening up to someone can be fearful for the ENTP at times, since this can expose them to being vulnerable. This doesn’t mean they are incapable of trusting others, it just means they can be rather selective about the process. They might not even make it obvious to others that they are hesitant to trust, as ENTPs are outgoing and friendly people who enjoy making connections and being social.

ENTPs struggle with the idea of being manipulated or coerced by someone else, which can make it hard for them to trust easily. They don’t like feeling like someone is attempting to control or manipulate their choices, and will want to avoid people like this entirely. For the ENTP the ability to make their own decisions and live independent lives, is truly important and is something which they value. If they feel like someone is attempting to take control of their lives or affect them in some way, it can cause them to push this person away. ENTPs want to be sure that the people around them are not attempting to manipulate or use them in any way. This can cause them to have a hard time really opening up to new people, as they want to be sure they can actually trust them. ENTPs can take time to research and analyze someone, wanting to gain some sort of insight into who they are and what their intentions actually are as well. For them it feels more natural to approach this logically, rather than allowing their feelings for someone to cloud their judgement.

ENTPs who have not developed their weaker functions are likely to have trust issues. When they haven’t learned to connect with their emotional side, they can become hyper-focused on analyzing people and understanding them logically. This can cause the ENTP to see the many ways that people can and likely will leave them feeling disappointed. Struggling to really know who they can trust, the ENTP finds themselves not wanting to be vulnerable with new people at all. They will analyze the situation and convince themselves that it is best if they do things themselves and keep their distance from others. Instead of learning how to really open up and rely on people, they prefer to find their own ways of solving problems. While the ENTPs independence can be a good thing, if they don’t learn to lean on others it can actually be something which isolates them. Not being able to connect with others can be somewhat depressing for the ENTP, since they are outgoing and social people. They want to feel close to people, they just might struggle to take that risk or that next step towards really trusting someone the way they need to.

When the ENTP feels as if someone has sincerely broken their trust it can be hard for this to ever be redeemed. It can take a while before they reach a breaking point, especially once they have let someone in. They might want to forgive that person again and again, and struggle to really see how they can let go of that connection so easily. This is often why ENTPs struggle to trust people, since once they let someone in it is harder for them to distance themselves from that person. If the trust has been sincerely broken and the closeness severed, the ENTP will eventually feel the need to disconnect entirely. For them it is often best to cut that person out of their lives, as this helps them to actually move on and let go of what they have with that person.

For the ENTP trust issues can be improved by learning to focus more on their weaker functions. Instead of focusing solely on their intuition and their sense of logic, they need to work on their extraverted feeling function. While applying too much pressure to this function is never good, addressing it and developing it in healthy ways can really help the ENTP. The more they learn to connect with people on an emotional level, the less they focus on all of the potential ways things could go wrong between them. Their minds can go in circles seeing how another person is likely to fail or betray them, and so they need to take a step back sometimes and trust in the connection they have. While people might make mistakes or leave them hurt, everyone can benefit from making those connections and even learn from them along the way. The more the ENTP learns that trusting and getting hurt is not a failure on their part, the easier it becomes to let go of those fears and move forward.