ESTJ Love: How the ESTJ Falls in Love 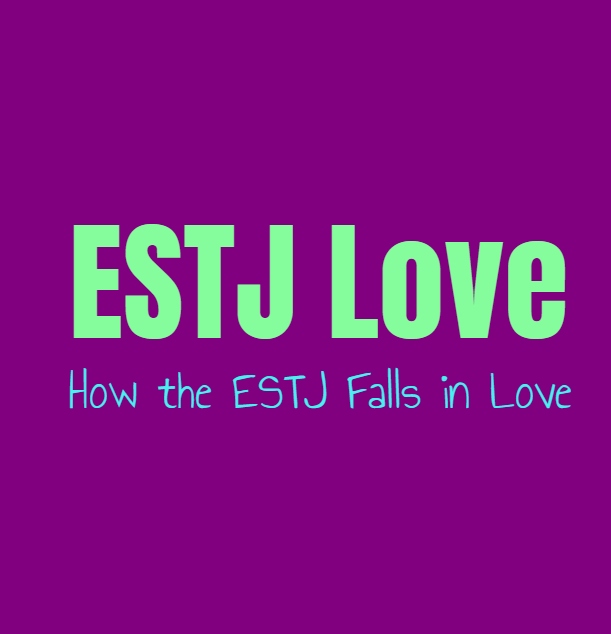 ESTJ Love: How the ESTJ Falls in Love

When it comes to love the ESTJ personality isn’t often viewed as a romantic, but that doesn’t mean they don’t fall hard. They are naturally more practical people but they care deeply about the people in their lives. They will go above and beyond to tend to the needs of those around them, and when the ESTJ falls in love this is something they take seriously. They might not be over the top romantics who get swept up in their emotions, but when they fall for someone it is something they hold as valuable and important. When the ESTJ does fall in love, they aren’t likely to take this lightly. Instead the ESTJ wants to go above and beyond to ensure that this bond will last for a lifetime.

They Don’t Fall Fast, But They Fall Hard

ESTJs are not ones to jump headfirst into love or romance, instead they believe in taking their time. ESTJs want to be sure about the person they are interested in before they allow themselves to make a connection. ESTJs take things slowly at first, but once they are sure they are likely to dive in. Once the ESTJ is sure that their feelings are real and that the person they are falling for is worth their time, they are going to be forward and confident in their attempts to woo them. ESTJs go after what they want and don’t believe in allowing anything to hold them back, and this goes for love and romance. When they know that they care for someone and can really see a future with them, the ESTJ will do whatever it takes to make this relationship work. They might now fall fast when it comes to love, but they do fall rather hard. People don’t usually expect this from the ESTJ, but when they care for someone they don’t find it easy to let go or move on. Once they develop these types of feelings it is something which will last a lifetime for the ESTJ, and is truly hard to break. They give their all when they are in love, and this is a connection they will tend to as best they can.

They Are Practical Romantics

While most people don’t really see the ESTJ as being romantic, they do have their own brand of romance. For the ESTJ tending to the real life and practical needs of their significant other, is actually intended as romance. For the ESTJ things which waste time and energy are just foolish, and so they would rather focus on something real and to them this is more sincere. Focusing on the needs of the person they love is how the ESTJ shows they care and express their inner feelings. They will go out of their way to make sure their significant other has everything they need and is completely cared for without worries. They want to be the provider of their family, to the ESTJ this is an important way of showing how much they love someone. This doesn’t mean they are incapable of more romantic gestures though, especially things like remembering birthdays and special occasions. ESTJs are often great at recalling dates, and so they know when they should find a special gift or plan something nice for those days. They might not be overly creative about it, but they will remember things their partner has mentioned and will try to get them something which they know they will cherish.

They Are Committed and Loyal

ESTJs are loyal people who believe in standing by the ones they love. When the ESTJ commits to a relationship they take this very seriously and are not likely to back out. When they make a commitment this is something the ESTJ wants to stand behind, which is why they don’t enter into things lightly or quickly. It might take time for the ESTJ to make the choice to commit themselves to a person or relationship, but once they do it is something they hold onto. They will fight hard for the person they love and will do whatever it takes to make the relationship work. ESTJs can sometimes remain in bad relationships because of this though, since they don’t believe in walking away when they feel like they should be trying harder. They will continue to remain loyal to someone long after they should, since they don’t feel it is right to give up on something or someone they have committed themselves to. For the ESTJ loyalty is such an important part of any relationship, which is why they search for people who are capable of standing by them. Even when their loved ones make mistakes the ESTJ doesn’t turn away from them. They are likely to be honest when they are disappointed in someone’s choices, but that doesn’t mean they cut that person out simply for making a mistake.

ESTJs are generally the caretakers and providers of their family, which is why it is important for them to find people who appreciate this. ESTJs will work hard to make sure their family is cared for and that all of their practical needs are met. When the ESTJ is in love this becomes a serious focus for them, as they want to be able to provide for this special someone. When they care about a person this much, the ESTJ would take it as a failure if they could not properly provide for all of their practical needs. While the ESTJ will go above and beyond for the person they are in love with, they do need to feel appreciated for this. Receiving recognition for all of their hard work is something which the ESTJ truly needs from their partner. They won’t express their need for this type of approval and appreciation, but it is truly important for the ESTJ to feel loved.