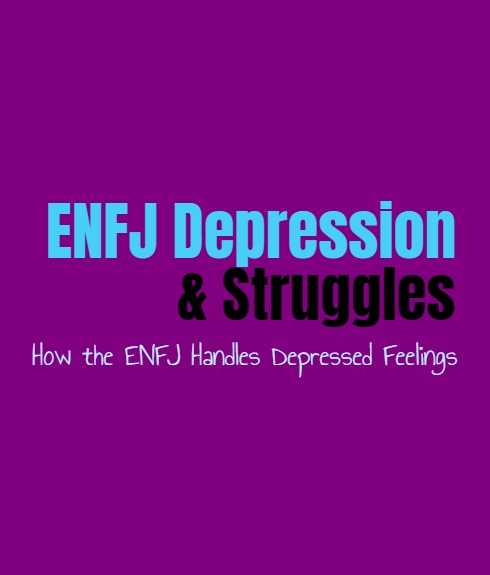 Everyone deals with their depression in their own ways, and some of these things are unique to the individual and not just their personality type. While depression is much more complex than just analyzing your personality, any tool can be helpful when it comes to recovery. It is always important to take the necessary steps towards getting better, but that doesn’t mean there aren’t certain things which can be learned when it comes to your personality type. ENFJs often have similar responses and inner feelings when it comes to their depression, and these things can be helpful in learning how to move forward for them.

Perfectionism Can Be Their Challenge

ENFJs are natural perfectionists, which does make them rather hard on themselves most of the time. They struggle to be forgiving and cut themselves slack, especially when mistakes have been made. ENFJs don’t give themselves enough room to be imperfect, and this is something which puts a lot of pressure on their shoulders. Having this mindset that they cannot make any mistakes and need to juggle everything all at once, is something which can weigh heavily on anyone’s shoulders. When the ENFJs is really struggling with depression, this part of themselves can certainly make the situation more difficult to get through.

The ENFJ likely doesn’t want their depression to cause them problems or prevent them from getting things done. They likely spend a lot of time trying to push through these feelings, or replace them with even more responsibility. ENFJs have a hard time relaxing or really feeling like they have let others down. They want to constantly be on top of their tasks and responsibilities, and so depression can be something which leaves them feeling an immense sense of guilt. If the ENFJs depression causes them to fall behind they might blame themselves, feeling like they should be doing better or should be capable of overcoming this. When in reality the ENFJ is not to blame, and they need to be giving themselves some time to recover without feeling guilty.

ENFJs often want to seem strong, and while they don’t judge others who are depressed. they can often judge themselves. ENFJs are always harder on themselves than others, and so it becomes difficult for them to overcome these inner feelings at times. They put pressure on themselves to always be strong, but it is important for the ENFJ to understand that depression does not make them weak. When they can ask for help and overcome these struggles, it makes them even stronger than before.

ENFJs often struggle with asking for help when they are in need, since they always want to be strong. They strive to be the person that others can lean on, and so needing help seems like a negative thing for the ENFJ. They don’t want to burden others with their problems, instead the ENFJ seeks to remove burdens from those around them. This is why it can be such a challenge for them to ask for help when they are struggling with depression. The ENFJ will often go a long time just trying to endure their depression, wanting to find their own ways of overcoming it or just ignoring that it exists.

It is truly important for the ENFJ to ask for help, even if they only seek help from a professional for a while. This first step can help them see that getting help isn’t a bad thing, and really is the right choice when they are having a hard time handling these feelings alone. It is still important for the ENFJ to reach out to their loved ones, and the people who they are always so supportive of. It might not be an easy step for them to take, since ENFJs don’t want to burden others with their own struggles. When they are going through something difficult the ENFJ really needs to feel connected to the ones they love. Without this type of connection they can start to feel more distant and even a bit alone, even when they are surrounded by people. While opening up about their feelings can be difficult for the ENFJ, it is an important step in recovering and healing.

Finding the Balance of Give and Take

While ENFJs are naturally giving people, they might struggle with really wanting to take much from others. This can sometimes be the very thing which sends them into depression, since they feel unappreciated and like their efforts aren’t being recognized. They need to start searching for the balance of give and take in their lives, in order to regain a sense of peace. Without taking time for themselves the ENFJ can become exhausted emotionally and mentally. When they are on a path towards healing they really need to start searching for this healthy balance. Helping others might be a major part of who the ENFJ is, but that doesn’t mean they cannot help themselves as well. Once they start to learn how to ask for what they want and take some time for their own needs, they can regain a sense of power in their lives. It may not be easy for the ENFJ to do this, but it really is vital if they want to pull through their depression.

Disclaimer: It is important to remember that depression can be a clinically serious issue and that you should always seek professional help when you are struggling with it. While it is nothing to be ashamed of, depression is very real and it is important to seek help in a professional sense rather than just doing your own research. These bits of advice are intended for people going through minor depressive feelings, and have likely already sought professional help. They are meant as small tools and ways of helping to improve your mental state.