What It Means to Be an ENTJ Female 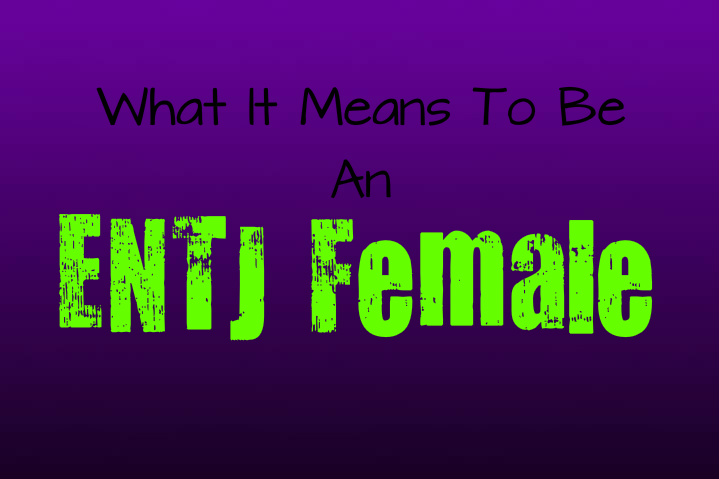 What It Means to Be an ENTJ Female

ENTJs are seen as natural leaders, with charismatic and likable personalities. They are not the most common of types, often seen as the bosses in many situations. While ENTJs are uncommon, ENTJ females are even rarer. Here are a few things that you should know about the ENTJ female.

They Are More Logical, Than They Are Emotional

Being a woman who favors logic over emotions, can be a difficult task. ENTJ women don’t fit into the stereotypical gender roles, which can sometimes be confusing to others. They simply choose to favor practical matters, more than emotional ones. They strive to get things done, and are very action oriented individuals, giving into feelings too much would certainly hinder their goals. ENTJ women are often extremely hard working and will push themselves to accomplish whatever task they put their mind to.

Just because ENTJ women prefer to focus on the more logical side of things, does not mean they are heartless. They do have emotions, just like any normal person, they simply prefer to focus on more rational ways to get things done. They know that focusing on emotions too much, won’t lead them to accomplishing the goals that they find most important. Their desire to be logical does not make them cold people, they are often very philanthropic individuals. If they see an opportunity to help someone grow, they will be eager to teach them. They won’t waste their time on someone who isn’t capable of learning from them, and might become frustrated with lazy or inefficient people. If someone comes to the ENTJ looking for help, then they will be more than willing to give them the tools that they need. They enjoy being able to teach others, especially if they are working together on something. They realize that building a strong team is going to benefit them as well, so they are more than happy to assist growth in this way.

They Are Often Seen In Male Dominated Careers

ENTJ women are often seen working in more male dominated careers, since they are very business minded. This can be a difficult task, since they will often have to work to gain the respect that they deserve. ENTJ women are always up for a challenge, and will use their intelligence and charisma to gain respect and even admiration from their peers. At first it might be a struggle, but they are certainly capable of overcoming adversity. ENTJ women do well if they are around people who are also logic minded, and will be able to work very well in a team.

ENTJ women make excellent leaders, and will often grow to become the boss in their career. They are great at leading a team to victory, and will work hard to make sure that everyone is focused on the task at hand. They are capable of encouraging creativity, as long as they can see a logical outcome.

They Can Be Intimidating

ENTJ women can often be seen as intimidating to others, especially romantic interests. They know what they want in life, and push rather hard to obtain these things. This driven attitude can often be seen as aggression, which might scare some people away. They simply are not lazy individuals, and prefer to keep themselves moving forward. This does not mean they are aggressive, but rather that they are motivated.

Anyone who is strong-willed in this way can easily be misunderstood- this is simply something the ENTJ woman will endure in her lifetime. In many cases though, there are people who are capable of seeing their hard-work for what it truly is.

As far as their romantic interests go- a woman who is intelligent and independent, can sometimes struggle to find the right partner. These qualities will often scare away their more immature suitors, which is perfectly okay with the ENTJ woman. ENTJs know what they want, and are not willing to settle for less than they deserve. They will be perfectly capable of being patient, while they wait for the right person to come along.

They Are Extremely Independent

ENTJ women are independent thinkers, who will take into account many different ideas before settling on one. They prefer to do the proper research, but also want to process this information through their own personal thoughts. The ENTJs ability to figure out the best solution to a problem, makes them incredibly accomplished individuals. Even if things don’t always go as planned, the ENTJ will often have a back-up plan ready to execute. This makes them one step ahead at all times, which is a great person to have on your side.

ENTJ women are not only independent in thought, but in action as well. They dislike being smothered by people, and prefer to have space to themselves. They enjoy being around their loved ones, but want to have lives that are separate from them as well. They will respect someone who is capable of standing on their own, but who simply WANTS to make room for the ENTJ in their lives.

Loyalty Is Important To Them

Although ENTJs are not the most emotional people, they are extremely loyal. ENTJs want people in their lives both professionally and romantically, who are loyal and dependable. Something that they despise more than anything, is finding out that they cannot trust the people closest to them. ENTJs are not afraid to remove people from their lives if they find out they aren’t worth keeping around. They only want to have people close to them who they can trust completely. ENTJs are very loyal themselves, and simply expect that in return from others.

ENTJ women certainly can be misunderstood by people who do not take the time to appreciate them. They are strong, intelligent and driven people- but at the same time they give a lot to the people that they care for. They are certainly worth having on your side, and will help you grow in ways you never thought possible.

Why ENTJS Are More Than Just Great Leaders