What Being Graded Does to You, Based on Your Personality Type 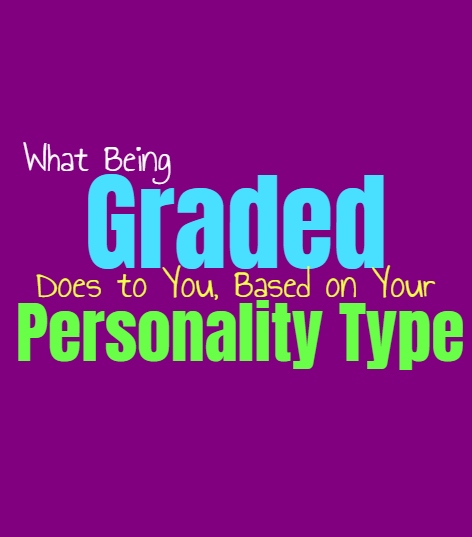 What Being Graded Does to You, Based on Your Personality Type

For some people being graded is a bit draining, while others simply push to perform. Here is how you handle being graded, based on your personality type.

When it comes to being graded for things it can leave the INFJ feeling pressured. While they do have a competitive side and can push themselves to improve, they can become a bit uneasy when they know someone is grading them. They can become a bit tense under the pressure and don’t want to feel like they are failing. When will do their best to live up to expectations but feeling like they are being graded is definitely something which stresses them out and leaves them feeling overwhelmed.

ENFJs can become a bit anxious with the pressure of being graded, but they are naturally perfectionists. They will often work harder in order to perform properly, since they really don’t want to fail or let others down. ENFJs might not enjoy being graded, but at the same time they don’t want to crumble under the pressure. They often take this as a chance to really push themselves in order to perform and to impress those around them.

INFPs can feel a lot of pressure when they are graded, and for them this feels a bit overwhelming. They really don’t like feeling as if they are being watched or judged by their ability to perform in something. INFPs often feel like they are being judged unfairly when they have to be graded on something, especially when they aren’t inspired by it. This leaves them feeling controlled, and INFPs really want to feel free to make their own choices and live their own lives.

ENFPs don’t really care about being graded, but sometimes it can feel like unnecessary pressure. They prefer to focus on doing their own things, and make their own choices. Feeling like they are being judged can feel a bit frustrating, as ENFPs don’t enjoy feeling obligated or controlled. While they don’t really appreciate being graded, they can also be rather competitive people who will do their best to perform under the pressure. ENFPs don’t like failing at things and so sometimes they want to step up just to prove what they are capable of.

ENTJs don’t mind being graded and simply take this as an opportunity to push themselves harder. When they know they are being graded they will simply do whatever it takes to prepare and be ready for it. ENFJs are perfectionists who don’t like failing or falling behind in anything they try to do. When they are being graded they simply want to step up and rise to the occasion, instead of allowing the pressure to overwhelm them. ENTJs realize that sometimes they need to be graded in order to show their ability to perform, and so they are simply want to prepare for this.

INTPs might become annoyed with the idea of being graded, but that doesn’t mean they cannot handle it. They enjoy being challenged and being able to constantly grow their minds and their knowledge base. While INTPs will usually do their best to prepare and be able to perform when they are being graded, there are times when they don’t really feel inspired by the situation. They don’t like feeling obligated or controlled in any situation, and so their response to being graded depends on the circumstances.

ENTPs don’t really mind being graded, but if they aren’t prepared they are capable of just winging it. For them it feels a bit draining to be forced into things, or feel obligated to perform a certain way. When they feel like they are being pushed they might just find themselves slacking off a bit and not really caring much about their performance level. For the most part ENTPs are very capable of handling being graded and will do their best to show their skills and take on the challenge.

ISTJs can often handle being graded, since they prepare themselves for this. They take this as a chance to show their abilities and will work hard to perform. ISTJs don’t like failing though, and so being told they are being graded last minute can be a bit annoying. They want to be able to prepare for things so that they can do well with whatever they are being graded on. ISTJs care about their performance and are often perfectionists.

ESTJs do their best to handle being graded by stepping up and taking on the challenge. They work hard and don’t want to fail at anything they do. When they know they are being watched or graded, then they will be try their best to push ahead and make sure they are capable of impressing others. For ESTJs being graded can be a bit stressful, but they take it as a challenge and make sure they can do their absolute best. They are perfectionists and so for the ESTJ failing is just not an option.

ESFJs can feel a bit overwhelmed when they know they are being graded, since being able to perform well is something which matters to them. They care about being able to accomplish things to a certain level of perfection, and so knowing they are being graded does add a certain level of pressure for them. ESFJs will simply do their best to prepare and try hard to take on the challenge.

ESTPs aren’t fans of obligations but at the same time they do their best to perform when they know they are being graded. For the ESTP it depends on the circumstances and whether or not they actually care to perform well. If it is something which matters to the ESTP then they will try hard to perform properly when they are being graded. When they don’t care much they might slack off a bit, and so the pressure won’t be all that overwhelming for them.

ISFPs don’t like feeling a sense of pressure on their shoulders, and so being graded can be challenging for them. They do sometimes feel a bit overwhelmed when they feel this sense of pressure and obligation to perform a certain way. For ISFPs this can be a draining experience but they will simply do their best not to let it feel too overwhelming. They want to perform for the people they love, but being graded is definitely something which they don’t enjoy.

ESFPs aren’t really fans of being graded, since they prefer to live their lives in the present moment. Obsessing over their accomplishments and their ability to perform, is certainly something which is challenging for the ESFP. They want to enjoy themselves and focus on seeking out the things which make them happy, and so being graded is really just a stressful situation which makes them feel like they have to focus more on their ability to perform a certain way for others.