INFP Virtues: The Importance of Inner Morals for the INFP 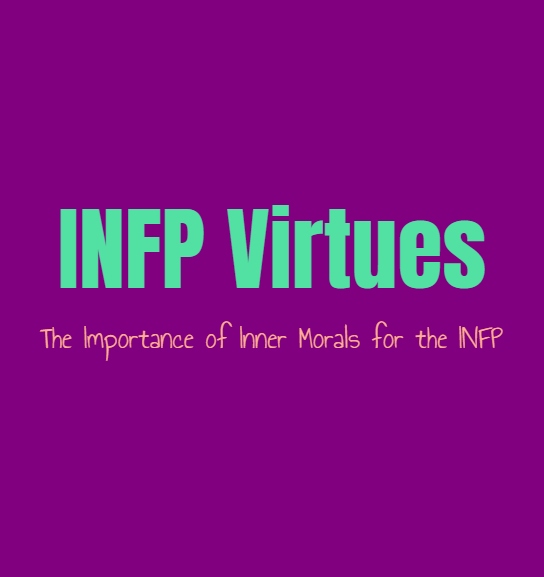 INFP Virtues: The Importance of Inner Morals for the INFP

What Their High Morals Mean to the INFP

For the INFP upholding their high moral standards is a big part of who they are. The INFPs has often spend their lives learning about themselves and uncovering the things they value most. This is how they come to these strong inner morals and their own sense of right and wrong. They develop this within themselves, and not based on what other people think or feel. While INFPs do care about others and their morals are often geared towards helping people, they make these choices internally. Since the INFPs morals are something deeply personal, they cannot be swayed or altered by the presence of someone else. This makes their sense of virtue rather strong and unwavering, as the INFP doesn’t simply change their mind to please someone else. They don’t believe in allowing people to make them question their morals or go against the things they believe in.

While INFPs might not confrontational or aggressive people, they can be when it comes to their sense of morals. They don’t like getting into disagreements or heated arguments with people, and will avoid discord where they can. They will however, stand up for those inner morals with a fierceness and strength. When someone tries to challenge or threaten the INFPs morals, they are not afraid of standing up for themselves and things which are most important to them. This is when the INFP can be rather intense to others, as they don’t believe in allowing people to push them around or threaten these beliefs. As the INFP gets older and becomes more mature, they have often developed a very strong sense of who they are and what they believe in. For them it is important to stay true to themselves and not allow others to sway them at all.

While INFPs often believe in listening to their heart and inner morals from a young age, it does take years for them to truly develop these beliefs. For the INFP to possess a strong sense of virtue, it often takes a lot of heartache and personal reflection. The INFP believes in working to understand themselves, which is why they spend so much time reflecting and looking inward. When the INFP is young they often need to spend plenty of time pushing their own boundaries and even going down some paths which aren’t right for them. The more they reflect and try to uncover these different options, the more the INFP learns where their true limits are. They spend a lot of their lives searching to understand themselves and the world around them, and this is how they uncover their sense of morals and inner needs and beliefs.

During their younger years the INFP often has to make some choices which can cause an upset in their lives, but these choices are what helps to shape them. Pushing themselves and learning about the things they don’t like, helps the INFP realize more about themselves and the things they need to avoid in life. As they grow and learn the INFP starts to develop a firm grasp on their inner morals. These beliefs become deeply rooted in the spirit and heart of the INFP, which is why they are unwavering and not something people can simply challenge.

INFPs believe in doing what is right and this is often connected to caring for others and making a difference in the world. The INFP doesn’t simply follow these morals for fun, it is part of who they are and what they believe in. If the INFP were to make a mistake and go against their own morals, they would be very hard on themselves. They take these things seriously and will continue to work hard to uphold those beliefs. While their own sense of morals might be simple things like always being kind, and always focusing on a black and white belief of what is right, that doesn’t make it any less important and valuable for the INFP. They do have a rather black and white mindset when it comes to right and wrong, and really they don’t see the shades of grey like some people do. For the INFP the idea of morals being complicated, is just an excuse for people to do the wrong thing. They can be rather firm when it comes to this, which can be frustrating for other people at times. It can be difficult to be around the INFPs sense of virtue when they are clearly disapproving of someone’s actions. While this isn’t always the easiest thing, it is impossible for the INFP to pretend or hide those feelings from others.