How Important Job Security Is to You, Based on Your Personality Type 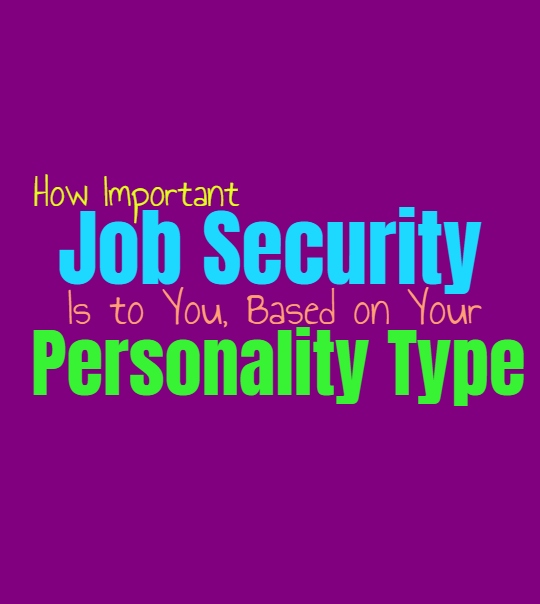 How Important Job Security Is to You, Based on Your Personality Type

Some people are more drawn to having job security, while others would rather bounce around until they find something which inspires them. While having some sort of security can be comforting for everyone, for some it is extremely important. Here is how important job security is to you, based on your personality type.

INFJs do care about job security, mostly because they don’t like feeling as if they are failing someone they love. For the INFJ job security simply gives them a sense of sureness and comfort in their lives. While many jobs might not be entirely rewarding for them, they don’t like taking chances which might risk them failing or making mistakes. INFJs do sometimes find themselves curious about other career options, but they also want to be sure they have some sort of job security in order to take off a bit of stress.

ENFJs definitely care about job security since they don’t like feeling as if they are out of their comfort zones. They want to be sure that their work is stable so that they can tend to the needs of the people they love. If they make mistakes the ENFJ takes this very hard, and often blame themselves if things don’t go as planned. When it comes to having job security ENFJs certainly feel it is important to be sure that they won’t lose this sense of stability. They do their best to create job security, and even have backup plans for if that doesn’t work.

INFP
INFPs don’t necessarily find themselves as drawn to job security, as they are to job satisfaction. They want to be sure they are exploring the right path and future which will leave them feeling fulfilled. When it comes to finding the right job INFPs often choose their passion over comfort and security. They do sometimes find themselves struggling when it comes to these situations, since they realize they need some sort of security to be able to pay their bills. Ultimately, INFPs would much rather have a job which makes them happy.

ENFPs don’t necessarily hold job security above finding a job which makes them happy. Working in a career which doesn’t leave them feeling more inspired and satisfied, isn’t going to be good enough for the ENFP. They prefer to focus on a job which they feel happy doing, something which really shows their skills and even challenges them in unique ways. For the ENFP job security is certainly comforting, but won’t bring them as much comfort as doing something they love.

INTJs definitely value a sense of job security, since they don’t like to feel like things are constantly at risk. They prefer to be sure of things and do know that their job is safe and secure. INTJs do however, want to have a career which they can continue to build on and grow. They won’t accept job security if they are have room for growth in their job. For the INTJ it is important to find both job security, and a job which provides them with what they need to thrive and to continue to move forward.

ENTJs do believe that job security is important, since they don’t like taking chances. For the ENTJ knowing that their job is safe and comfortable is truly something they feel is vital. At the same time they don’t want to work a job that does not have room for growth and advancement. For the ENTJ it is important to know that they will continue moving forward and have something they can work towards and aspire to. As long as there job offers room for advancement, then the ENTJ does believe that having job security is also a requirement.

INTPs do sometimes feel like job security is important, since they are logical people. They realize that in order to survive and obtain the things they want, they need to have job security to some extent. At the same time INTPs are imaginative people who enjoy exploring different options and choices in their lives. They often want to feel free to try something different, and sometimes this means avoiding careers which don’t really challenge them or expand their minds in the way they want.

ENTPs do enjoy having job security in the sense that they don’t like feeling like they are lacking in the comforts and things they want to obtain in life. At the same time, ENTPs might struggle to prioritize job security over going after the things they really want. If they find themselves bored in a certain career then they are likely to struggle to remain in this position, wanting to find something which is more fulfilling and mentally challenging for them. ENTPs don’t want stagnancy in their lives, and so job security isn’t always the most important thing for them.

ISTJs definitely believe that job security is extremely important, and don’t like having anything be up in the air. For them job security is a vital part of their careers, since it brings them a sense of sureness and comfort. They don’t like feeling as if they don’t have their future guaranteed, since it can leave them feeling very stressed. ISTJs value having a job which is secure and one that they know will not be at risk for any reason.

ESTJs definitely value job security, since they want things in their lives to be sure and comfortable. For the ESTJ having last minute changes occur can be extremely unnerving, especially when it comes to their jobs. They would rather have a career which they know is secure, so that they don’t have to constantly stress about money or being able to provide for themselves or others. For the ESTJ practicality often outweighs going after some dream job, but they are good at finding a happy medium most of the time.

ISFJs definitely care about job security, since they care about providing for their loved ones. They don’t like allowing anything they do to jeopardize the happiness of their loved ones, and so for them having a job which can provide for them is vital. ISFJs would often value practicality over most things, since they already have a lot of responsibility on their own shoulders. When it comes to their job they want to be sure it is safe and secure, and this often brings them a great amount of comfort.

ESFJs often value job security over many things, since they put a lot of responsibilities onto their own shoulders. They want to be sure that they can provide for their loved ones, and don’t want to feel like they have failed them in any way. If they cannot depend on the sureness of their jobs, then they will feel anxious and uneasy almost constantly. For the ESFJ job security is a crucial part of being able to take care of their loved ones and ensure that they’re practical needs are met.

ISTPs don’t care about job security as much as they care about living their own lives. They believe in making their own choices and don’t want to feel like someone else is dictating their lives. ISTPs might want to change their minds last minute, especially if their job is not fulfilling or exciting enough for them. When they become bored the ISTP might switch careers, and so for the job security isn’t necessarily the most vital thing.

ESTP
ESTPs do care about job security to some extent, but at the same time they want to feel free to make their own choices. When it comes to their careers they need something that challenges them and keeps them entertained. They don’t like feeling bored or stagnant, and so they might change their minds and their careers quickly. When it comes to their jobs the ESTP does enjoy knowing that they are doing a good job, for them just knowing that their work is being reflected properly is often security enough.

ISFPs don’t really care about job security as much as they care about going after their dreams. They want a career which excites and fulfills them, since they can become bored fairly easily. For the ISFP it is best to feel open to different things, and sometimes they enjoy changing their minds last minute. They do care about having some sort of security, but at the same time ISFP do enjoy having change in their lives.

ESFPs enjoy being able to have some sort of sureness in their jobs, but at the same time this isn’t as important as having freedoms and chasing their passions. For the ESFP being able to go after their dreams and search for something which inspires them, is far more vital than job security. While they want to be able to know that they are appreciated in their jobs, they also believe in having freedoms and the option to change their minds.