Here’s How Sneaky You Can Be, Based on Your Personality Type 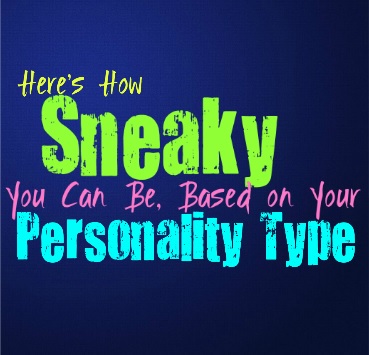 Here’s How Sneaky You Can Be, Based on Your Personality Type

Some people are capable of doing things in a way that is sly and seems to just slip by undetected. In some cases being sneaky is a bad thing, in other situations it is necessary (like in video games). Here is how sneaky you can, based on your personality type.

INFJs don’t like being sneaky, but they are discreet people when they need to be. If there is something important that they need to get done in a way that goes undetected, INFJs are often great at this. They do have the capabilities to be sneaky people, and can even be skilled liars. Most of the time INFJs don’t like behaving this way and would rather be upfront, especially with the people they love most. There are some INFJs who might struggle with being completely open though, and might feel that they need to do a few sneaky things in order to help others.

INFPs are definitely not sneaky people, and definitely not on purpose. They strive to be upfront and open, and don’t like having to hide anything. They especially don’t like hiding who they are and what their beliefs are. INFPs don’t like people who are constantly pretending or being sneaky about their intentions, and will have a hard time ever trusting them. INFPs really aren’t interested in doing things that will be shady or sneaky, since sincerity is just a part of who they are.

ENFPs don’t like being sneaky and prefer to be a bit more transparent with their personality. ENFPs often dislike being around sneaky people, especially when they attempt make people believe that they are honest. They value a sense of sincerity and do their best to make their intentions very clear. ENFPs might be jokingly sneaky in order to play pranks or have a little fun, but they almost always come clean about the truth and express what they were actually doing.

INTJs do value a sense of honesty, but there might be times when being a bit sneaky seems necessary. INTJs are very focused on getting things done and sometimes this requires a bit of sneaking around. While they are likely to come clean and be honest about their actions, INTJs don’t want to forgo their chance to actually discover the truth and learn about something. They value being able to uncover the truth and find ways to remove ignorance, and sometimes this does require doing things in a somewhat underhanded manner.

ENTJs prefer to be upfront but they are also efficient above everything else. If the ENTJ needs to behave in a way that seems a bit sneaky in order to get around something or get the job done, they are likely to do this. They do have strong morals and have certain lines that they don’t believe in crossing, but they bend the rules on occasion. ENTJs simply believe that in some situations it is better to be a bit more discreet so that they can focus on what is important.

INTPs don’t really do things in a sneaky way intentionally, but they are naturally private people. They just don’t find themselves behaving in a way that is open for others to see, which can appear sneaky. Most of their thoughts and actions they keep to themselves and often they struggle to remember to express certain details to others. For the INTP it is rarely intentional sneakiness, most of the time it is just done because they find it easier to keep to themselves.

ENTPs focus on stretching their minds and expanding their experiences as much as they can. Sometimes they do things that seem a bit sneaky, simply because they want to push certain boundaries. ENTPs sometimes do things in a sneaky manner in order to learn something that they otherwise would not have been able to. They believe in bending the rules from time to time in order to gain a better and more accurate grasp on a situation.

ISTJs really don’t like being sneaky and are much more likely to be honest and upfront. For ISTJs being sneaky just isn’t necessary and feels like a waste of their energy. They focus on their own tasks and responsibilities and work hard to get things done. ISTJs don’t have much respect for people who feel a need to sneak around and do things in a way that seems underhanded. They are very moral people and prefer to live their lives in a way that they can be proud of.

ESTJs aren’t usually sneaky people, unless it is required in order to be more efficient in a situation. Most of the time they approach things from a black and white, moral standpoint, but there are times when being a little sneaky is needed. ESTJs are only likely to be sneaky in order to protect someone they love and make sure they are take care of. Most of the time the ESTJ would rather be upfront about their intentions and their actions, instead of sneaking around.

ISFJs really don’t like being sneaky and prefer to be honest and upfront with most things. They might be private about certain parts of their lives, but that does not make them sneaky. They simply don’t feel the need to divulge personal information which they have every right to keep. ISFJs don’t like having to sneak around in order to keep things quiet though, and can become truly upset if this feels necessary. They are more interested in focusing on their responsibilities and would rather not be sneaky.

ESFJs definitely don’t like being sneaky, but there are times when they might feel like this is necessary. ESFJs try to be upfront and on the level about all of the things they do. They might have times where being a bit sneaky is needed in order to protect their loved ones or do something in order to please them. If they are stuck in this type of situation they might exhibit somewhat sneaky behaviors, but rarely is it done maliciously.

ISTPs can appear a bit sneaky at times, since they keep things to themselves. They don’t like having to share too much of themselves and might prefer doing things in ways that others cannot really see. ISTPs aren’t sneaky in malicious ways, but they don’t really like having to do things by the book. There are times when they prefer to get things done on their own terms and sometimes this means a bit of sneaking around.

ESTPs can have moments of being a bit sneaky, especially if they are trying to protect themselves or someone they love. If they are in a situation where hiding certain details is the safest option, they can be a bit sneaky. They simply don’t believe that they always need to be completely open about things, and would rather keep certain details to themselves. ESTPs definitely won’t continue to be sneaky about something for long, but sometimes it is their initial reaction.

ISFPs don’t like being sneaky about things and would much rather be upfront. They are usually rather open and even a bit transparent about their feelings and their actions. ISFPs just don’t behave in ways that are sneaky, since it often goes against their natural personality. They put their hearts on their sleeve and have a hard time really holding back. If the ISFP attempts to be sneaky about something it is often hard for them to maintain that.

ESFPs don’t like being sneaky about things and are usually rather transparent. They have some moments where they want something and need to be a bit sneaky to obtain it. ESFPs don’t like feeling restrained and in situations where someone is holding them back they might become a bit sneaky in order to get their way. They simply don’t like feeling like someone is stopping them from going after their dreams and so they will bend the rules a bit.