Here’s How Much of a Disciplinarian You Can Be, Based on Your Personality Type 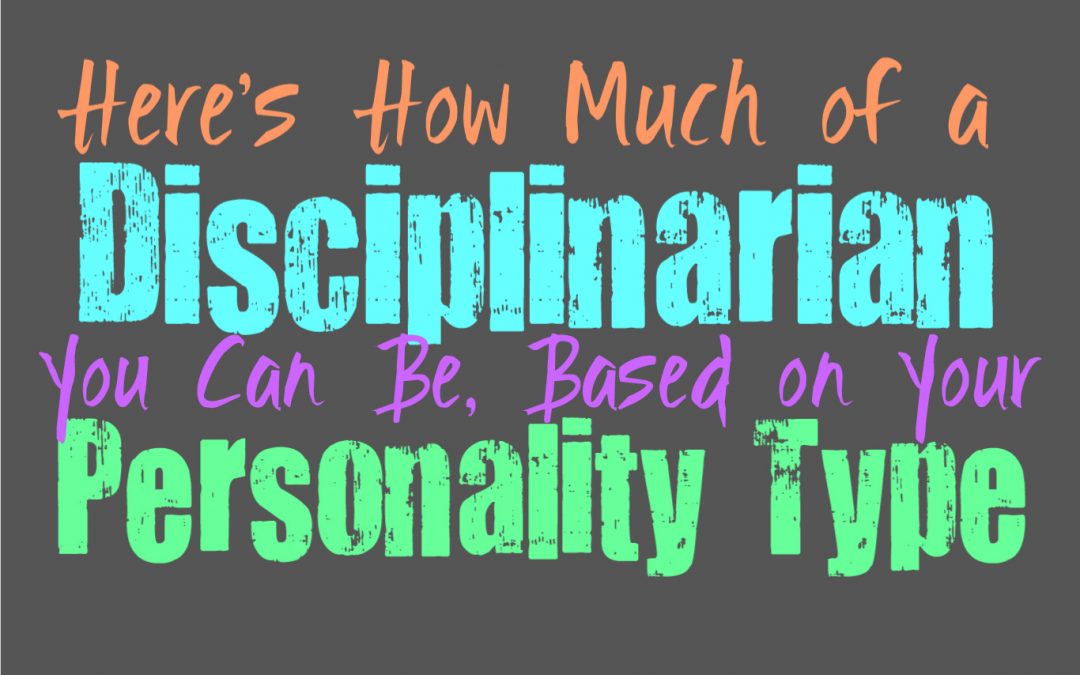 Here’s How Much of a Disciplinarian You Can Be, Based on Your Personality Type

For some people scolding others is challenging, for others it comes rather naturally. Here is how much of a disciplinarian you can be, based on your personality type.

INFJs really don’t like being the one to reprimand others for their mistakes. They aren’t fans of having to be a disciplinarian, and would much prefer help others learn in a more patient and compassionate manner. As parents they will become the one to discipline if they must, but the INFJ would rather build a relationship that fosters mutual respect and understanding. Having to discipline is frustrating for them most of the time, and certainly is not something that comes naturally. INFJs do have a time when they feel just in their need to reprimand others, and will be much more concise and comfortable doing this.

While ENFJs don’t enjoy being the disciplinarian, they are certainly capable of it. ENFJs are naturally people pleasers, so they prefer not to upset anyone. If they are in a situation with their children or with someone who simply isn’t behaving appropriately, they can certainly lay down the rules. ENFJs will try to coerce people in a more peaceful manner, but once this does not work they can be the one to reprimand. They simply want to ensure that everyone is behaving appropriately, especially when it comes to their children and family members.

INFPs really aren’t disciplinarians, and prefer to avoid reprimanding others. If the INFP is in a situation where they need to be a bit stern to get their point across, they can certainly do this. At the same time INFP would rather keep to themselves and avoid this type of unnecessary confrontation. INFPs often find it exhausting if they have to be the bad guy and play the disciplinarian role, and would much rather let people be. INFPs like giving people space to make their own mistakes, without having someone constantly trying to reprimand them for it.

ENFPs really aren’t the disciplinarian types, and prefer to give people space and freedom. They don’t enjoy having to lay down the rules, since they often dislike following them themselves. ENFPs are more of the free-spirit types, who enjoy being able to experience life in their own way. Having to be the disciplinarian in a situation is often stressful for the ENFP, and isn’t really something they enjoy doing. ENFPs become annoyed with people who actually enjoy reprimanding others, and often want to avoid these types of people.

While INTJs often prefer to keep to themselves, they are still very capable of being the disciplinarian if they have to be. INTJs set certain boundaries and rules when it comes to being around them or in their home, and become frustrated with people who cannot follow them. For them it is important to be respectful, and they aren’t afraid of reminding people of this. If their children or even employees are not behaving appropriately, the INTJ will not be afraid to be the one to reprimand them when it is completely necessary to do so.

ENTJs really don’t struggle when it comes to playing the role of disciplinarian, and often find this comes naturally for them. They are already the types to end up in a leadership role, because they know how to take control of a situation. If someone is not following the rules and clearly needs to be reprimanded, the ENTJ will be more than capable of stepping in. They simply know how to communicate with people and demand a certain level of excellence and efficiency from them. ENTJs don’t do this to be controlling, but simply to obtain a higher level of accomplishment from those around them.

INTPs really don’t enjoy being the disciplinarian, and often find this a bit exhausting. They don’t really enjoy having to reprimand people, especially in a work environment. For INTPs it is more beneficial to be around people who can communicate with them on more equal grounds. Having to constantly watch and hover over people to ensure they are doing things correctly is rather draining for the INTP. They often prefer to work alone, and dislike having to reprimand others or be around people who enjoy being the disciplinarian.

ENTPs really aren’t the disciplinarian types, since they prefer a certain level of independence and space from others. Having to constantly reprimand others for their mistakes is definitely not something ENTPs enjoy. They likely become frustrated in a position where they have to constantly monitor people and find ways to discipline them for their mistakes. ENTPs enjoy being free to experience new things, and even make a few mistakes here and there. They see value in these errors since the ENTP knows that everything can become a learning experience.

ISTJs are definitely capable of being the disciplinarian if they have to be. They are often rule followers and believe that following certain structure and rules is a sign of respect. If someone has clear boundaries then the ISTJ will respect them, and they expect the same in return. When people are breaking the rules or being inefficient, ISTJs are often very good at reprimanding them the best way possible. They aren’t afraid of taking charge if they have do, and will do what they can to create a sense of order.

ESTJs are natural disciplinarians, which is often why they make good leaders or bosses. When they are in a work environment the ESTJ expects a certain level of excellence and they will do whatever it takes to bring this out in others. If someone is falling behind the ESTJ will definitely be capable of reprimanding them, simply because they value efficiency from the people around them. They work hard to get things done and they expect this same level of effort from the people they work with.

ISFJs definitely don’t enjoy being the disciplinarian, and prefer to keep the peace. They will certainly try to smooth things over and help people improve in a more delicate manner. ISFJs are natural people pleasers, and so they dislike upsetting anyone or making anyone angry at them. If the ISFJ does have to reprimand someone, they will be capable of it when the time comes. They simply prefer to coerce people into doing the right thing without having to lay down the law.

ESFJs don’t enjoy playing the role of disciplinarian, but they are definitely capable of it. ESFJs would rather keep the peace and try to find a more pleasant way to get people to take care of things properly. They don’t like having to reprimand people, especially the ones they care for. ESFJs are people pleasers, and they want others to like and respect them. If they are in a work situation, or if the people in their household aren’t making enough effort, the ESFJ will step in and become the disciplinarian where they have to be.

ISTPs really aren’t natural disciplinarians, since they prefer to be on their own most of the time. ISTPs are capable of correcting people when they are wrong, but they don’t do this in a way that seems like discipline. For the ISTP it is more about spreading the truth and helping to correct inaccuracies. Having to be the one to discipline others for their mistakes, is certainly something the ISTP does not enjoy.

ESTPs aren’t naturally the disciplinarian type, since they enjoy being able to get along with others. There are times when the ESTP becomes frustrated with someone constantly making the same mistakes, and they will certainly step in and reprimand them. For the ESTP it is more about the actions of others which affect them personally, other than that they don’t really care to be the one to discipline people. ESTPs do however like to spread the truth, and will correct someone who is saying something inaccurate.

ISFPs really aren’t natural disciplinarians, and often dislike having to reprimand others. They prefer to live their lives with a sense of freedom and joy, and don’t want to have to discipline others. ISFPs are free-spirits, who enjoy living in the present and don’t want to hold onto the past. If someone has made a mistake the ISFP isn’t likely to reprimand them for it, especially if it is the first time they have made this error.

ESFPs aren’t often seen as disciplinarians, simply because they enjoy making life into a party. They want to have fun and live in the present, and dislike having to lay down the rules. While ESFPs don’t want to become caught up on disciplining others, that doesn’t mean they aren’t capable of it. If the ESFPs children or their work employees are not behaving appropriately, they will certainly be able to set down some rules and play the role of disciplinarian.