ENFJ Flirting & Dating: How to Attract an ENFJ 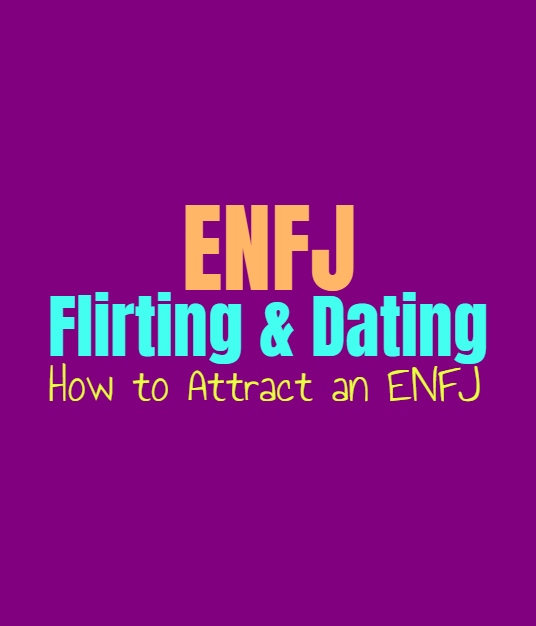 ENFJ Flirting & Dating: How to Attract an ENFJ

When it comes to romantic relationships and dating people can often respond differently. They have their own ways of processing their feelings, as well as unique goals they have for their relationships. Not everyone flirts the same, but sometimes these specific traits can be connected to personality type and how people naturally respond in these situations. When it comes to relationships most ENFJs care deeply about finding someone special to share themselves with. They are outgoing people who want to be able to connect with others and so often romance is important to them as well.

ENFJs are often notoriously known for being flirts, but this isn’t necessarily their intention. They do enjoy connecting with others and are naturally rather social people. When the ENFJ is being friendly and social this doesn’t mean they are trying to flirt with someone, it just appears this way at times. They are compassionate people who enjoy being kind to others and getting to know them. Sometimes this friendly nature makes people think the ENFJ is flirting when they are not, which makes it hard to really know for sure when they are sincerely trying to flirt with more romantic intentions. Knowing the difference between their more friendly flirtatious nature, and when the ENFJ is truly interested in someone, can sometimes be challenging.

When the ENFJ really wants to be with someone, their flirting can become a bit more obvious. They want to be sure this individual is aware of their feelings and so their flirtatious behavior can be rather forward at times. They try to express their feelings outright, so that this person knows their intentions and won’t assume the ENFJ wants someone else. ENFJs  often know how to play social games when it comes to dating, and will try to assess the situation to see if they should. When the flirtation begins they will often have times of very aggressively expressing their interest, but then wanting to take a step back to allow the other person to initiate contact. For the ENFJ this can become a push and pull, turning into a bit of a dance between themselves and the person they are interested in. Their intention isn’t to confuse the person, but to draw them in, in just the right way.

When it comes to romantic relationships the ENFJ gives all that they have into making their partner happy. They will go above and beyond to tend to their needs and wants to be someone who can provide for them, When they care for someone in this way ENFJs want to be capable of giving everything to their partner, and will work hard to do so. They invest so much of themselves into pleasing others and so when they enter in a relationship this only becomes stronger. This can be hard for the ENFJ and their partner at times, since they put a lot of pressure on themselves to be perfect in the relationship.

ENFJs are naturally empathetic people and so they enjoy listening and being support of their partner. They want to be there for them when no one else is, working hard to maintain this bond and even strengthen it. Because they tend so much to others the ENFJ can sometimes neglect their own wants and needs. While they might not openly express when they need something, it is important that the person they are dating can recognize these things without being asked. They really need someone who will look out for the ENFJ as well and want to be supportive when they are feeling overwhelmed. ENFJs push themselves hard for those around them, and so when it comes to their relationships they really need a significant other who is supportive and understanding with them. Someone who knows how to give and not just take from the ENFJ all of the time.

Casual dating really isn’t something the ENFJ is likely to enjoy, especially when they are older. They might date casually when they are young, wanting to follow typical social behaviors. When they do this it can be a little bit draining, unless they are capable of making friends out of these dates and connections. In the end the ENFJ needs to be around people who they know will stick around, not just surface connections which won’t last very long. Casual dating can feel a bit pointless to them after a while, since the ENFJ is ultimately searching for something meaningful and lasting. They deeply want to find a partner who can provide something important and valuable for them, someone who they can actually see themselves being with long-term.

What Attracts the ENFJ

ENFJs are often immensely attracted to talent in all forms, no matter what the talent is. Someone who has some sort of impressive skill is likely to be very appealing to the ENFJ. They are excited to see the talent in others, especially when it is something they might not have expected. Whenever they witness some sort of extraordinary skill they are likely to be very drawn to this and the person possessing these abilities. They are also excited about passion and someone who possess a great deal of intensity about their hobbies or personal interests. They want to learn more about these things and enjoy listening to someone express the different subjects and hobbies they are deeply passionate about in life.

ENFJs are also attracted to confident people, someone who can hold themselves with a sense of sureness. Witnessing this type of strong and often mysterious demeanor is likely to be very attractive to the ENFJ. They enjoy being around people who surprise them sometimes, as long as these surprises are positive ones and not harmful in some way. A person who doesn’t always respond in ways they can predict is often exciting and alluring for the ENFJ. Since they are used to being able to predict people, there can often be a serious draw towards someone who they cannot always predict or completely figure out right away.