Just How Tolerant of a Person You Are, Based on Your Personality Type 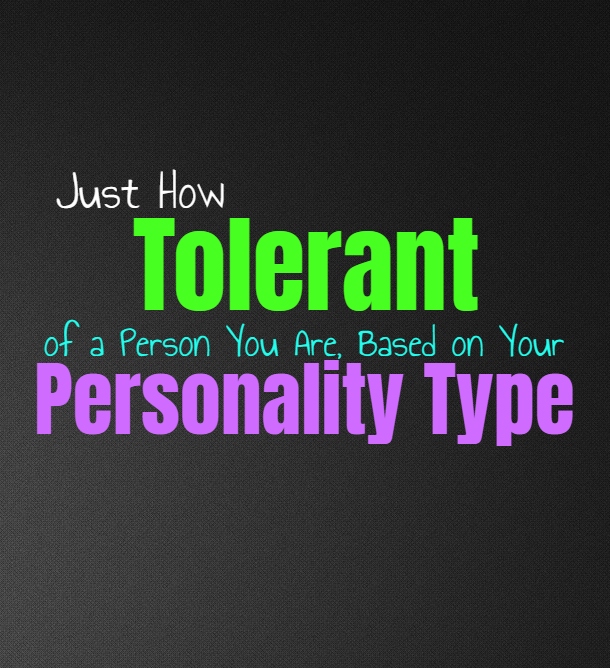 Just How Tolerant of a Person You Are, Based on Your Personality Type

Some people are naturally more tolerant and find themselves capable of dealing with stress and discomforts. They can tolerate these struggles without finding themselves impatient and short-tempered, but this isn’t something everyone is blessed with. Here is how tolerant of a person you can be, based on your personality type.

INFJs do sometimes struggle when it comes to being tolerant of certain situations. They become drained and can have a bit of a short-fuse, especially when they have already spent too much time socializing. INFJs just want to have time to themselves to recharge and process information and their emotions. When they haven’t had this they can certainly struggle to be tolerant of situations or of things not going as planned.

ENFJs do struggle to be tolerant even though this is something they strive to be. They want to be able to tolerate the frustrating things in life without exploding, but sometimes they lose patience with people and situations. ENFJs can be high-stress people, simply because they take on so much and put a lot of pressure on themselves. They are more tolerant of people and their differences, but less tolerant of failures and things not going as planned. They accept people openly, they just don’t accept when things don’t work out as they hope.

INFPs try their best to be tolerant of changes and of things not going as expected. They don’t want to feel like they are allowing these negative things to overwhelm them, but there are times when they lose patience as well. INFPs are often more tolerant than other types, finding themselves somewhere in the middle. They do find themselves losing a sense of tolerance for people who are rude to others and this can be something the INFP struggles with.

ENFPs can actually be rather tolerant people, especially when it comes to changes happening or life not going entirely as planned. They try their best to just go with the flow and not allow things to hold them back from living their lives freely. ENFPs don’t want to feel themselves losing patience or becoming intolerant of things when they should be more laid-back about the situation. They do their best to tolerate the unexpected things in life, not wanting to let themselves become negative.

INTJs do sometimes struggle with it comes to how much they can tolerate, since they lose their patience fairly easily. They don’t have much patience for people who are incompetent and cannot seem to take care of things properly. In these situations the INTJ just can’t maintain their sense of tolerance the way they often like to, and so they will need to get away from these people and focus on doing things their own way.

ENTJs are not that tolerant when it comes to certain things like inefficiency, and so they lose their patience in these situations. They can be tolerant when it comes to opposing viewpoints, but not with undergoing certain situations or circumstances which are exhausting and frustrating to them. They lose their patience when someone is not efficient and cannot seem to get things done the way they should, especially when these people cannot listen to the ENTJ.

INTPs can actually be surprisingly tolerant of differing opinions and of things not going quite as they would expect. They try to be capable of withstanding these changes or unexpected situations, not wanting to be someone who loses their cool easily. INTPs do sometimes become frustrated and less tolerant when they have been forced to socialize for too long and are simply feeling drained and overwhelmed by this.

ENTPs are often tolerant people, who even enjoy when someone has a differing opinion from their own. They take this as an opportunity to debate the situation and possible learn a lot from it. They enjoy when people are willing to challenge them, especially if these people are intelligent and pose interesting idea. ENTPs don’t want to be in stagnant situations and actually prefer when they can switching things up, and so this requires a certain level of tolerance and even sometimes patience.

ISTJs can be somewhat impatient people and so they can also struggle with their tolerance levels for some things. When it comes to people being inefficient or not responding the way the ISTJ feels they should, they can become intolerant of this behavior. While they try to be open to opposing views, they can also find themselves struggling to accept this when the person doesn’t seem to back things up with facts or reason.

ESTJs can sometimes struggle with being open-minded to opposing views. They can be a bit stubborn when it comes to what they believe in and they lose patience when someone just isn’t efficient enough. They struggle to really tolerate this, being as they want things to be done efficiently and effectively. For the ESTJ it is more important to get things done rather than to be sensitive to someone’s feelings on the situation.

ISFJs can sometimes struggle when it comes to being patient and tolerant to new things. They dislike too much change and prefer when things are done a certain way. ISFJs have to juggle so much at once most of the time, that they don’t appreciate when things change or go in a new direction. They might not be tolerant of certain changes or atmospheres, but they try to be kind and open to what people want around them.

ESFJs can certainly struggle when it comes to being tolerant of situations and of changes. When someone tries to argue with them, the ESFJ might not always be completely tolerant of this. This is because they focus on getting things done their own way, and often have so much they are juggling at once. They care about making their loved ones happy, but they also care about being efficient and so they do become intolerant when someone gets in the way of this.

ISTPs try to be tolerant people, especially when it comes to new things. They try to be open to changes and don’t like being intolerant when someone opposes them. ISTPs want to be open to other ideas, as long as they are presented with a sense of thought and intelligence. ISTPs want to be free to explore different options without losing patience and seeming intolerant of them.

ESTPs try their best to be tolerant of changes and of people opposing their views. They want to seem open to these options and don’t like feeling stuck in their ways. ESTPs do their best to remain tolerant but there are times when they lose their patience with people. They become less tolerant of these situations when someone seems to be completely incapable of using facts and logic in a situation.

ISFPs try their best to be tolerant people, wanting to be open to differences. They are often capable of just going with the flow and do what they can to avoid becoming impatient. ISFPs want to live their lives with a sense of openness and don’t like the thoughts of becoming someone who is constantly incapable of accepting differences in others.

ESFPs do try to be tolerant people, not wanting negativity to seep into their lives. They believe in being open to change and of doing their best to accept when someone does not agree with them. ESFPs just want to be free to explore their own path, without having people try to control them. When someone does seem to hold the ESFP back, they do lose their patience and simply won’t be open to tolerating this.