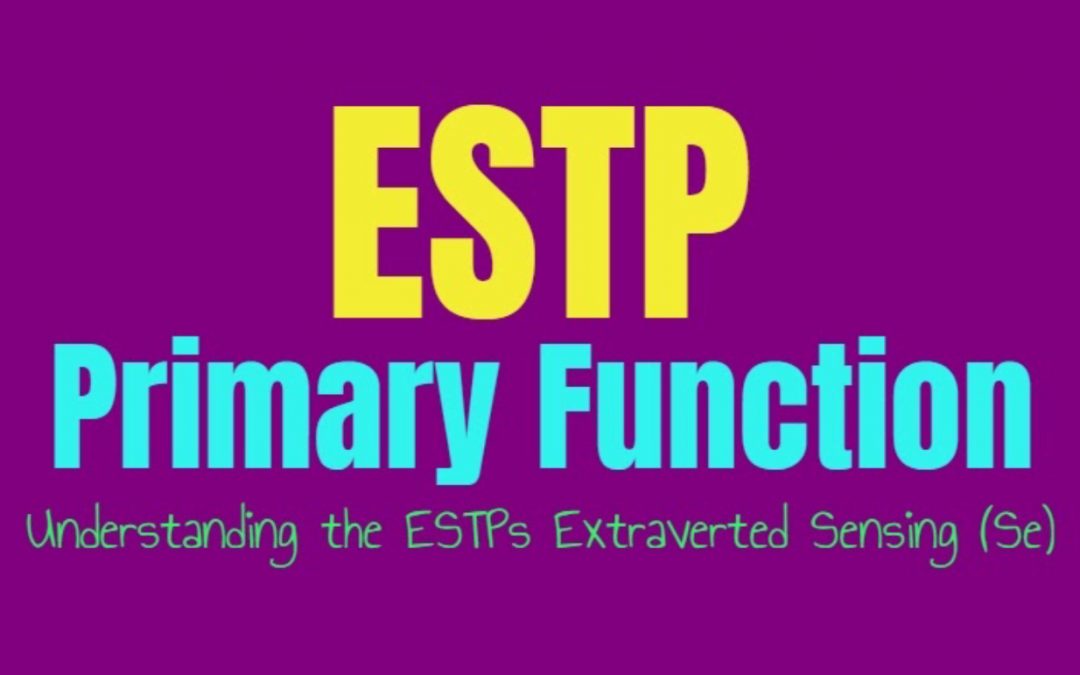 ESTPs are outgoing people who love to jump into new and exciting adventures. For them life should be lived with a sense of passion and curiosity, as they don’t like remaining stagnant for too long. ESTPs live very much in the present moment, but they are also analytical and practical people. Their dominant function is certainly the one which stands out the most since it is an extraverted function. It is often obvious to people when a person is an extraverted sensing dominant, but there are other functions in play which are important to understand as well. To be able to differentiate the ESTP from other types, you need to understand how their function stack helps to aid the rest of their functions.

Extraverted sensing or Se is very focused on the physical world and living in the present. Someone who uses Se as their dominant function doesn’t like getting hung up on past or future situations, instead they want to take things as they come. They are extremely connected to their physical presence and their senses, wanting to connect with things they feel and see. For the extraverted sensing types it is important to live in the moment and follow what feels right to them. They can be rather good at things like sports or spatial awareness, being very in tune with the world they see, touch, smell, taste and hear. For these personality types who use Se as their dominant function, it can be hard to understand why some people seem so distracted or spaced out, since they are focused on connecting with the present moment.

This is something which can be useful in more ways than just quick reflexes or being able to enjoy the moment. The dominant Se user is often able to recognize the smallest changes and adjustments in their environment. They can see when something isn’t quite right or fitting into what they know to be previously accurate. When changes occur the Se dom will be able to take notice of this, and this can help them understand when something is wrong around them. It is connected to the physical and the things they tangibly see, but can also help them understand when a person is upset. Since being truly upset can alter someone’s physical presence, the Se dom will often take note of this. They can also tell when someone is not feeling themselves, and this helps them in certain medical fields as well. Being so in touch with their senses is something which can make the Se user rather capable and skilled at predicting when certain things might occur.

ESTPs show their dominant function in many ways, which makes them very action-oriented people. They don’t like wasting time and instead want to be able to live in the present. They can become impatient if they are forced to remain stagnant for too long and want to find something more active to keep them busy. They take in information by using their senses, and will absorb everything around them in the physical world. This is why ESTPs can be so focused on more real world applications and information, rather than considering what “could be” or certain hypotheticals which they cannot tangibly connect with. They value things they can prove and understand in the moment, rather than sometimes which keeps them from focusing on what is real and practical. ESTPs can be very focused on details, since they can recall and recognize them very well. This causes them to be very perceptive people in a lot of situations, being able to see when something has changed or isn’t how it is supposed to be. It helps them when it comes to problem solving, as they can visualize the problem and figure out practical means of working through whatever it is. They value things which allow them to work with their hands, often wanting to take things apart and see how they really work.

The ESTPs dominant function is their extraverted sensing, but their auxiliary function also plays an important role in how they respond to the world and process it. Their secondary function is their Ti or introverted thinking, and this is what drives them to understand the world better. ESTPs are not only focused on enjoying the present and seeking out thrills, they are actually very intellectual people. They crave knowledge and want to understand how things work and operate. They have this internal framework, which is built from information they gather from their dominant function. This is a function which works in the background, helping the ESTP to work through all of the information and ideas they collect because of their dominant Se function. They want to connect with things which are logical and make sense, rather than something which seems pointless and even a bit wasteful. The ESTP utilizes their other functions as a means of aiding their dominant function, helping them to make logical decisions in the moment rather than just bouncing from one thing to the next. While they might live in the present their Ti is what helps them decide what is logical and which path is the best one for them to take.