Can You Cope with Taking Personal Risks, Based on Your Personality Type 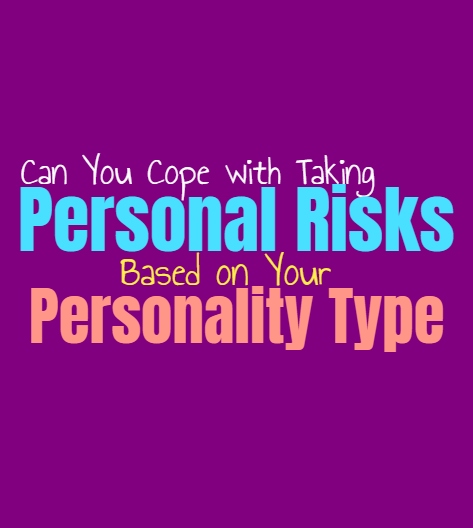 Can You Cope with Taking Personal Risks, Based on Your Personality Type

For some people taking risks which are for themselves can actually be more challenging, because it feels a bit too selfish for them. They are willing to take these risks for the sake of someone else, but when it becomes personal they have a hard time really accepting this. Can you cope with taking personal risks, based on your personality type.

INFJs can struggle more with taking personal risks, or risks at all most of the time. They prefer when things can be clear and when they don’t have to step outside of their comfort zones. This is because INFJs don’t want to take risks which might lead to failure, especially if this leaves their loved ones feeling disappointed in them. INFJs don’t want to do anything which might cause pain or sadness to the people they love and care for, and so personal risks just aren’t their style most of the time.

ENFJs can have a hard time justifying personal risks, because they don’t want to take chances which might seem selfish. When they are taking these risks solely for their own personal gain, it can be unnerving. ENFJs don’t handle failure all that well, especially if this failure happens because they were focusing on something self-centered. This can make it challenging for the ENFJ to really do much for themselves, unless they can be sure these things will have a positive outcome.

INFPs want to feel free to follow their hearts, even if this means taking a few personal risks. If they want to achieve something or go after something, they don’t like feeling restrained by these thoughts of doubt. INFPs don’t want to be seen as selfish, but they also don’t want to give up on their dreams because of guilt. INFPs will often take personal risks when they are striving for something truly important and meaningful to them, even if this means they might fail.

ENFPs want to feel free to make their own choices, even if this leads to failure sometimes. They believe in following their hearts and going after what they believe in. When the ENFP is inspired by something they don’t want to feel restricted or like they cannot take the risk. They are willing to take these personal risks, even if it might seem selfish to others. While ENFPs care deeply for their loved ones, they also believe in caring for themselves and following their dreams. Their focus is often more on making their loved ones proud than most people realize.

INTJs are perfectly capable of taking personal risks, since they don’t see this as selfish at all. While some people might be afraid of letting others down, INTJs are more focused on being logical and practical. If they see that taking this personal risk is the smartest choice and will lead to accomplish what they want, then they will make this choice. INTJs don’t like taking too many risks in general, since they prefer most of their actions to be thought through and almost guaranteed to have a positive result.

ENTJs are willing to take personal risks because they believe in being independent in their choices. Most of the time they prefer to avoid risks completely though, wanting to make sure every choice can be backed up. ENTJs just want to avoid failure in their lives, wanting to be sure that any risks they take are calculated ones which will likely pan out to their benefit. ENTJs don’t see it as selfish to take personal risks, they just want to be sure their actions are efficient and focused.

INTPs don’t mind taking personal risks, since they are independent people. They don’t want to feel like they cannot do something because others will deem this as selfish. INTPs want to feel free to make their own choices and take their own chances if they want to. While they prefer to calculate the risk and analyze the situation before moving forward, that doesn’t mean they are unwilling to actually take these risks for themselves and their own futures.

ENTPs are happy to take personal risks, especially if it can lead them to something exciting. ENTPs are willing to step outside of their comfort zones and value having freedom and independence in their lives. They don’t like feeling obligated to live within their comfort zone simply because someone might see them as selfish. ENTPs are often giving and caring people, they just don’t believe in stifling themselves because they might fail.

ISTJs don’t like taking personal risks or risks in general, they prefer to be sure of things before moving forward. They care about being able to get the job done and don’t want to make any mistakes along the way. For the ISTJ it is important to be sure that they can accomplish their tasks without taking risks which could lead to failure. ISTJs can feel like personal risks are a bit selfish, especially if these risks are based on emotions rather than being practical.

ESTJs don’t really like taking risks at all, especially not ones which are selfish and based on inner emotions. For them personal risks could lead to failure and could lead to their loved ones being disappointed in them. THey don’t want to move forward with something without being sure they can accomplish the task efficiently and with a certain level of skill.

ISFJs don’t like taking personal risks because it could lead to disappointing others. They don’t like focusing on anything which seems self-serving, especially if these risks could lead to failure and letting others down. ISFJs are willing to take some risks when it could be done for the sake of someone else, but even then they would rather be sure that they can accomplish the task without failure.

ESFJs have a hard time taking personal risks because these things can feel a bit too selfish for them. If they feel like their risks are going to lead to someone else getting hurt or going without, then this is something the ESFJ has a hard time doing. They often have goals and desires but they can keep these things to themselves, worried that they might fail and leave someone they love feeling disappointed.

ISTPs don’t fear personal risks, since they enjoy stepping outside of their comfort zone. For the ISTP taking risks is simply part of experiencing life and of diving into new things. They believe in living their lives with a sense of independence and so they don’t want to feel obligated to do things how others expect them to. ISTPs don’t see personal risks as being selfish, they simply see it as following their own path in life.

ESTPs are often willing to take plenty of personal risks, since they don’t like feeling stifled or stagnant. They want to feel free to enjoy the present moment and sometimes this means taking risks and diving into new experiences. While ESTPs care about their loved ones and don’t want to disappoint them, they also want to feel free to go after what they want.

ISFPs are often willing to take personal risks because they believe in following their hearts. They want to feel free to explore their own path without feeling like someone is trying to control or stifle them. ISFPs don’t see taking personal risks as selfish, since they feel like they need to nourish their own souls and desires in order to be capable of tending to the needs of others.

ESFPs are certainly capable of taking personal risks and often believe in stepping outside of their comfort zones to do this. They don’t want to feel stagnant or held back because someone is trying to control them and their choices. ESFPs are often willing to take personal risks for the sake of going after the things they want in life. They follow their hearts even if this can become a bit messy, and they don’t see this as selfish.