The Ways You Respond to Forced Greetings, Based on Your Personality Type 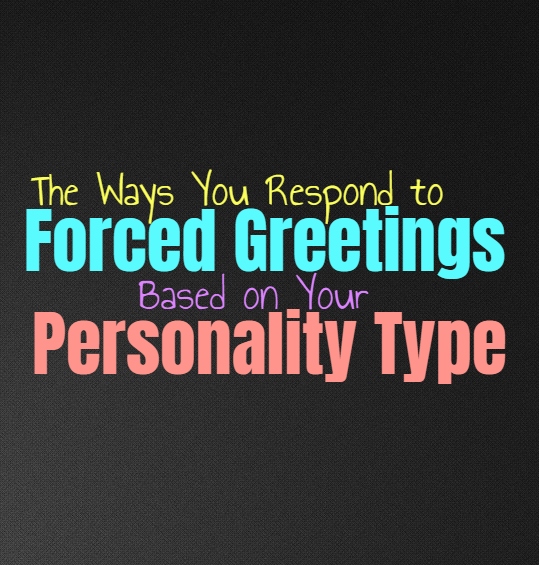 The Ways You Respond to Forced Greetings, Based on Your Personality Type

Forced greetings are often just a part of socializing, and sometimes they are an important part of working retail positions. When you have to deal with customer service jobs you need to greet others, even if it feels a bit forced. Some people take this much easier than others do, more capable of dealing with the awkwardness. Here are the ways in which you respond to forced greetings, based on your personality type.

INFJs really don’t like the idea of forced greetings, since it feels unnatural and uncomfortable. They don’t like feeling like they have to greet someone, especially if that person clearly wants to be left alone. This can be a major reason why INFJs don’t often feel satisfied in customer service or retail positions. Feeling obligated to welcome someone when that person clearly does not want to be greeted, is something which makes the INFJ feel frustrated and anxious.

ENFJs really don’t enjoy forced greetings but they are often capable of handling them. For them it feels unnatural to push someone when they can clearly see they want to be left alone. ENFJs are empathetic people and this is often how they decide how to greet and communicate with people. If they realize that someone will respond positively to a welcome greeting, then the ENFJ is often comfortable and happy utilizing this. ENFJs are definitely capable of these forced greetings but they don’t really enjoy participating in them all of the time.

INFPs really don’t like forced greetings or feeling obligated to participate in them. Whether they are the ones having to initiate this greeting, or having to respond to it, it oftens feels really unnatural for them. INFPs don’t like these type of awkward interactions and prefer when things are much more comfortable and natural. They don’t like feeling as if they are obligated to greet someone, especially when that person clearly wants to be left alone. These types of situations are often rather draining for the INFP, and really don’t make them feel comfortable or pleased.

Most greetings don’t feel all that forced for the ENFP, since they are outgoing and friendly people. For them greeting others can feel rather natural and comfortable, even if it seems forced. ENFPs can often overcome these awkward feelings by just going with the flow of the situation and trying their best to turn on the charm. They enjoy interacting with others most of the time, and so for them most greetings don’t feel forced or awkward as long as they don’t last too long.

INTJs really don’t enjoy any kind of forced greeting or interaction, and prefer when things are more natural. When they are in a situation where they are obligated to greet someone, they simply do what is cordial and appropriate and want to move on quickly. These situations really do feel awkward and pointless to them most of the time, and can sometimes make them feel a bit drained afterwards. INTJs do their best to avoid being seen as rude in these situations, even though they often feel frustrated.

ENTJs don’t enjoy forced greetings but they are often capable of executing them well. They are often rather outgoing people and they know that they need to interact with others in order to be viewed a certain way. ENTJs are very focused on getting things done, and will want to succeed at any job or position they are in. If for some reason they have to deal with forced greetings they will simply put on a friendly face and do their best to make it less awkward for everyone involved.

INTPs really despise anything which feels forced, especially forced interaction. If they have to socialize with someone or are forced to greet them in an awkward situation, it often makes them feel rather anxious. INTPs prefer when things are more natural and comfortable, not wanting to push people to socialize much like they don’t want to feel obligated to do so themselves. For the INTP any type of forced greeting is going to make them feel both anxious and annoyed.

ENTPs don’t mind forced greetings as long as there is some sort of logical reasoning behind them. They are outgoing people and can often turn an awkward situation into something fun and amusing. Their sense of charm and wit can help the ENTP make these otherwise horrible and forced greetings, into something a bit more fun and lively. For them these situations can be a bit draining and boring, but they try to make the most of it and not allow it to make them feel miserable.

ISTJs don’t really enjoy forced greeting or forced interaction of any kind. They often prefer to keep to themselves and focus on their own time and activities. For the most part ISTJs really don’t enjoy feeling obligated to interact with someone or behave a certain way. While this is something which can drain them, ISTJs also do their best to follow the rules and expectations of society and their community. They often despise forced greetings but will still follow through with them and try to be as polite and appropriate as possible.

ESTJs don’t really mind forced greetings, as they are often outgoing people. They are comfortable interacting with others and often see these greetings as a normal part of societal expectations. If the ESTJ is in a situation where they know they have to execute a greeting which might feel a bit forced, they are often capable of doing this in a cordial and polite manner. They don’t really feel uncomfortable in these scenarios, since ESTJs are often rather confident and outgoing people.

ISFJs are often friendly and polite people, who believe in doing their best to follow the rules of society. While a forced greeting can feel a bit awkward they often are capable of following through with this and will do their best to make it more comfortable for everyone involved. ISFJs realize that sometimes people don’t want to deal with these types of greetings, but they do their best to follow through and do what is appropriate or expected of them.

ESFJs definitely don’t enjoy forced greetings since they are often rather empathetic people. They can sense when someone clearly doesn’t want to be bothered, and so having to force them to interact can feel unnatural. ESFJs will do their best to make this as painless as possible, trying to be friendly but also give people space at the same time. For them forced greetings can be uncomfortable since they are so in touch with the emotions of those around them. They are usually rather outgoing people though, so the ESFJ will do their best to deal with these greetings appropriately.

ISTPs really don’t enjoy forced greetings or feeling obligated to interact with anyone. They prefer to keep to themselves most of the time and so feeling as if they are required to greet someone is often awkward for them. ISTPs can certainly be social people but most of the time they want to keep to themselves and avoid this type of situation. They will do their best to deal with it if they have to, but it really isn’t something they enjoy and often leaves them feeling drained.

ESTPs don’t mind forced greetings and can usually follow through with them easily enough. They are charming and outgoing people who don’t mind interacting with others most of the time. There are some instances when the ESTP might feel drained and unsocial, but that doesn’t mean they are incapable of interacting and following through with these obligations of greeting someone.

ISFPs do their best to be friendly and kind, but they really don’t enjoy any kind of forced interaction. If they are obligated to participate in some sort of forced greeting, they often try their best to avoid this entirely. ISFPs would rather interact with people when it feels comfortable and natural, not when it is required or expected of them. This is why most retail positions can be exhausting for the ISFP, since they want to interact with people when it feels right.

ESFPs really don’t mind forced greetings since they are often social and outgoing people. They enjoy interacting with others and rarely does this feel truly forced for them. They want to make new friends and connections and so most of the time when the ESFP is required to greet someone, they take it as an opportunity to interact with someone new. For them most situations don’t feel forced, since they really are friendly people.