Is There a Part of You That Fears Happiness, According to Your Personality Type 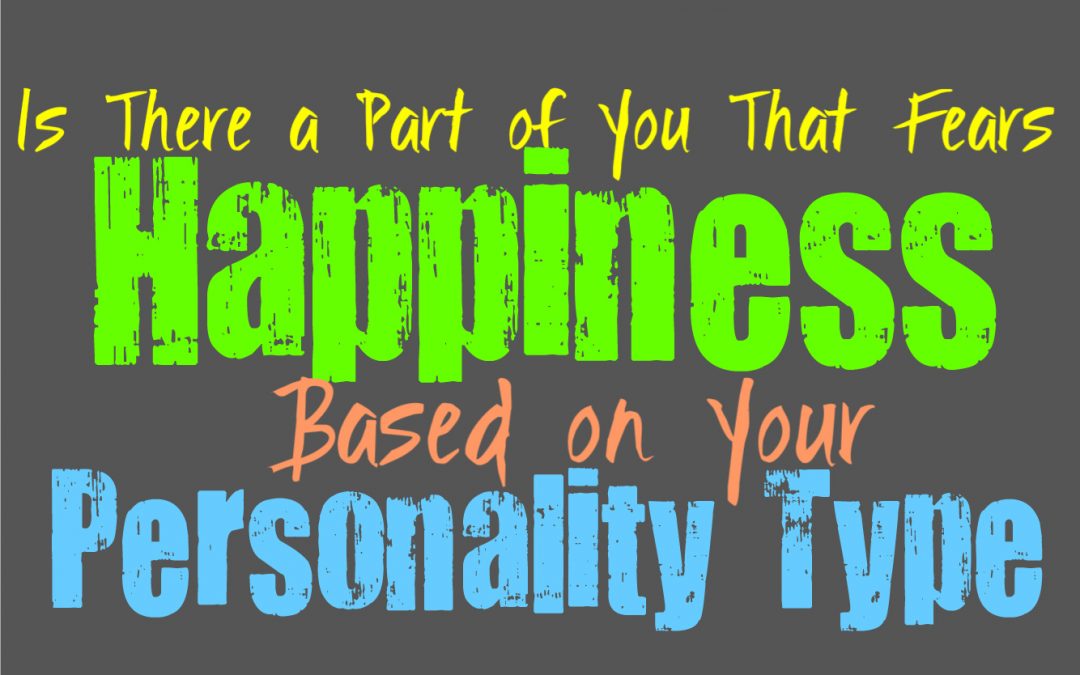 Is There a Part of You That Fears Happiness, According to Your Personality Type

While it might seem like an unreasonable idea, it is rather common for people to fear happiness. There are various things that cause people to feel this sense of fear, but it often stems from fear of losing it. That questioning that the other shoe is about to drop, can cause some people to avoid feeling truly happy. Here is whether or not you have a fear of happiness, based on your personality type.

INFJs actually do have a tendency to fear happiness, but deep down it is much more than that. The INFJ might keep away from things that could make them truly happy, but this is often a fear of failure. They can be afraid that taking a risk of something that would truly fulfill them, could only mean disappointment. They have sensitive hearts and so taking a chance on something that could let them down, can be truly frightening. For the INFJ their fear of happiness is more a fear of losing their happiness once they achieve it.

ENFJs can sometimes fear true happiness, but more than anything this is a fear of failure. They are often fearful that if they achieve the things they want, they can also lose those things. ENFJs work hard to keep everything juggled and maintained, especially for their loved ones. ENFJs can feel overwhelmed by the pressure of maintaining their happiness, and so this definitely causes them to seem fearful of it. Most of the time they try to overcome this and simply juggle these emotions and fears as best they can.

INFPs can be afraid of taking a chance on happiness, since they do struggle when they are let down. They might not be on the hunt for happiness, as much as realness and meaning in their lives. INFPs want to find people they can connect with, through the good and the bad. They aren’t afraid of the emotions that can be a bit painful, as long as it serves a purpose and a true meaning. INFPs value being able to find their purpose in life and the people they can connect and bond with.

ENFPs try not to fear happiness, instead they search out the things that will give them joy. ENFPs seek out the things in life that fulfill them, and they actually want to find some sense of happiness. While they do seek these things out, they do have a side of them that becomes fearful when they achieve it. If they have been hurt in the past the ENFP might be scared of losing their happiness, especially when it comes to relationships. This can cause them to be fearful of getting closer, even if they want to.

INTJs do not fear happiness most of the time, but they don’t jump into things just because they feel good. INTJs prefer to assess things and want to be sure that it makes sense before just allowing their desires to guide them. For them being happy often means achieving their goals and finding people in their lives they can rely on. For the INTJ these are things they do not fear, instead they actively seek them out and do their best to make it a reality.

INTPs have a somewhat cynical side, but at the same time they often have a romantic spirit deep down. This combination can cause the INTP to be a bit fearful of happiness, and avoidant of it entirely. They find themselves struggling to really open up to people, and they can be afraid of getting hurt or disappointed. The INTP tries not to keep themselves from the things that will make them happy, but they might have a hard time trusting it entirely.

ENTPs are logical people, with a heart that can be a bit romantic deep down. This can cause them to be a bit fearful of happiness, since they are afraid of being let down. ENTPs try to use logic to answer their questions in life, but emotions can be difficult to logic away. There can be a part of them that is afraid of opening up, only to lose what made them so happy. ENTPs don’t like to show this side of them, but deep down they can certainly be afraid of losing the things or people that make them happy.

ISTJs don’t usually fear happiness, instead they go after the things they want. For them it is illogical to hide from the things that might bring them joy, especially if those things are practical and sensible. ISTJs work hard to accomplish their goals and build a life for their loved ones. To the ISTJ these goals are what truly makes them happy, and they will do anything to make it happen. They are mostly rewarded by having loved ones who they can connect with and rely on in life.

ESTJs don’t often fear happiness, instead they do whatever they can to acquire it. They are often most fulfilled by their goals and their loved ones. ESTJs search out someone they can make a lasting connection with, and to them this is often truly important. They do their best to accomplish their goals in life, and believe in working hard to make things happen. ESTJs don’t run from the things they want, instead they go charging towards them.

ISFJs don’t like running away from the things that make them happy, but internally they might be fearful of them. For the ISFJ it can be a lot of pressure to maintain their lives and make their loved ones happy as well. This pressure can cause the ISFJ to be fearful of happiness in some ways, but it rarely holds them back from going after what they want. ISFJs do their best to keep their loved ones happy and to make their lives something that is meaningful to them.

ESFJs do have a part of them that might fear happiness, only because they fear losing it or letting others down. They work hard to maintain their lifestyles and deeply want to make their loved ones happy. Sometimes the ESFJ can focus so hard on pleasing others, so that they don’t have to focus on their own internal needs as much. This can comes from a fear of happiness, but even more so it is a fear of being a failure or losing out on things.

ISTPs don’t usually fear happiness, instead they actively seek out the things that they enjoy in life. They don’t like holding themselves back for fear of making mistakes, since to them this just doesn’t make sense. ISTPs often accept that life is made up of mistakes, and so they do whatever they can to follow their own path and go after what they want.

ESTPs don’t often fear happiness, instead they actively seek out the things they want in life. They aren’t afraid of taking chances, as long as they can see something rewarding coming from these risks. For the ESTP life is about going after wat they want and living in the present moment. They try not to obsess over the past, or even the future, and want to make the most out of the moment.

ISFPs don’t fear happiness in most cases, instead they seek it out. They want to find the things that will fulfill them the most, and so they follow their hearts. ISFPs believe in following what feels right for them, which means living in the moment. For them seeking out the things that will make them happy and fulfill them, is truly what matters most.

ESFPs are rarely fearful of happiness, instead they actively seek it out. They believe in following their hearts and doing what feels right in the moment. ESFPs don’t like allowing fear to hold them back, especially from something that will be fulfilling and truly make them happy. For them it is better to take a risk and get hurt, than to live their lives constantly afraid of what might happen.