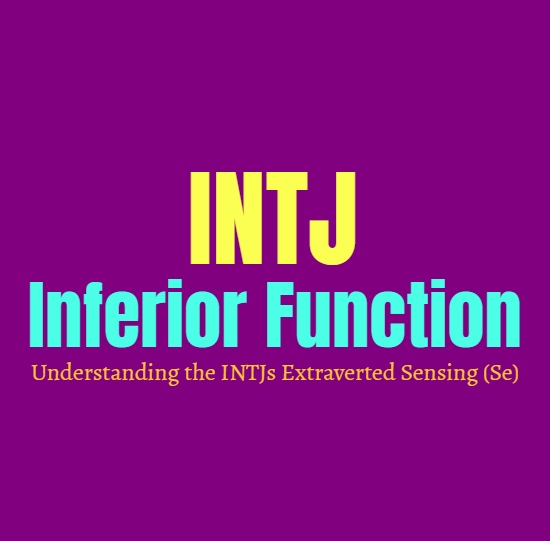 The INTJs inferior function is their extraverted sensing (Se), which focuses on the outside world and their physical presence. Extraverted sensing is very in tune with their physical bodies, as well as living in the present moment. For the INTJ this is their inferior function, which means it plays an entirely different role for them than it would for someone who uses it as their dominant function. It can sometimes seem like the INTJs lacks or neglects their Se entirely, but that is not entirely true. While this function might not work in the same way as their dominant introverted intuition (Ni), it still plays an important part in making the INTJ who they are. Each function serves a purpose, that purpose is just dependent on where it is placed in their functions stack, also how well they develop or work on using this function.

What Is Extraverted Sensing (Se)

Extraverted sensing (Se) is about being in tune with the present moment, rather than focusing on the past or even the future. While some people want to constantly plan and think ahead, strong Se users are more focused on enjoying the moment they are currently living in. They know how to be very present, without needing to constantly analyze or look into how things will affect them down the line. Extraverted sensing wants to enjoy the surroundings and soak up the things which brings that person pleasure and excitement. It also is very connected to the physical world, and is not afraid of taking risks in the moment. People who use Se as their dominant function are often very physical people, who enjoy being able to surround themselves with things that make them feel truly good and alive. They might even be drawn to nature, sports and indulging in things like food or physical touch. Anything which brings out a sense of excitement and follows what feels right in that present moment. For the INTJ this can be a bit different, since they don’t utilize Se as their dominant function and do not allow this to take control when their Ni is what makes important choices for them.

The Role of the INTJs Inferior Function

Not utilizing Se as a more in control function can cause personality types like the INTJ to seem clumsy or out of touch with their physical selves. In truth they do possess this function and will use it when it is important or truly necessary. This is why INTJs can actually be rather physical alert and even graceful people, when they are focused on a certain task. INTJs can be surprisingly skilled at things like cooking, building things, or dealing with their hands. Most people would not expect them to be capable of these tasks, but it is only when it seems necessary to them. INTJs often focus more on their dominant functions, and don’t pay so much attention to the physical world or things which require attention to the present moment. When they do feel like it is needed they can be great at these types of tasks, since it is utilizing their Se in simpler ways rather than allowing it to take charge of their sense of problem solving and main focus or drive. INTJs also utilize Se a bit when they are trying to make fast decisions, or pick up on details and information from their surroundings. INTJs are capable of noticing certain changes, but only when it seems truly important or they feel they need to pay closer attention to these details. This function can often be used more subconsciously for the INTJ, and helps them to pick up on things which they might even appear to be oblivious to.

When the INTJ spends too much time focusing on their dominant introverted intuition (Ni), or when they are under extreme stress in their lives, they can start to find themselves in their grip. The INTJ becomes hyper focused on their introverted function, and this can cause them to behave much differently than usual. When the INTJ is utilizing their Se in this way, they can become much more reckless. They start to seek out things which satisfy them in the moment, rather than looking towards the future. Ordinarily INTJs are very good at preparing themselves and planning for the future and goals they want to achieve most. When their Se takes control they become drawn to anything which thrills them, without much care about how it will alter their future behaviors. Instead they want to seek out excitement and momentary things, often focusing on what is shallow rather than meaningful. The INTJ might become obsessed with image and start purchasing lavish things which make themselves appear successful on the outside. This is definitely not normal behavior, instead it is what happens when they are applying too much focus on their inferior function and not allowing their Ni to remain in control. The INTJ wants to seek out momentary pleasures, wanting to appear fun and capable to those around them.