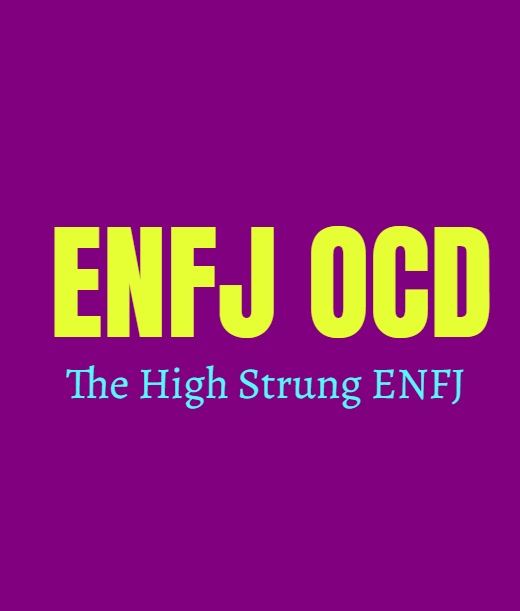 ENFJs are perfectionists, which can cause them to be confused with having OCD or showing OCD behaviors. They do obsess a bit about getting things right and being sure that the details are perfect. ENFJs can spend a long period of time thinking about something they have to do, worrying that it might not go as they planned. They can certainly show behaviors which seem obsessive, and even like they are incapable of finding a balance and relaxing. Of course this doesn’t mean ENFJs are actually more prone to OCD, since everyone can show certain traits or behaviors which are similar to this disorder without actually having the more intense and intrusive thoughts and behaviors.

ENFJs are perfectionists and they often have a hard time allowing anything to be less than perfect. They put so much pressure on themselves to be successful and ensure that everyone is cared for properly, and this is something which can be overwhelming at times. While most of the time ENFJs can handle the pressure they put on themselves, after long periods of time it can become too much. They go so long without tending to their own needs and this creates a lot of stress for the ENFJ. They start to obsess about the details, and can appear very high strung when they are trying to focus on getting something done. ENFJs don’t like to feel as if they have failed and so they will go over something repeatedly to ensure it is correct. This can certainly appear obsessive, especially when the ENFJ is trying to perfect something which already seems nearly perfect. Normally they are capable of accomplishing their tasks without obsessing to this level, but when they are under stress it becomes hard for them to find the balance. They also can become much more on edge, and seem to snap easily when someone doesn’t do things the right way. ENFJs are normally compassionate and patient people, but under stress this can certainly change.

Since they are so connected to these types of obsessive thoughts and behaviors, the ENFJ who is diagnosed with OCD can certainly feel a sense of personal guilt over this. They blame themselves for not being stronger and can certainly feel ashamed of what they are going through. It is truly important for them to find connections with people who appreciate them and can pull them out of this sense of self-doubt. ENFJs put so much pressure on themselves to be perfect for everyone, and this is just something that no one can really live up to. While they come pretty close, not even the ENFJ can do everything perfectly. It is important for the ENFJ to learn to take care of themselves too, instead of only focusing on tending to the needs of everyone else. This can certainly cause their behavior to become high strung and obsessive, even if they don’t have OCD. For the ENFJ who shows these behaviors, it can sometimes be because they obsess over things and worry to the point of causing themselves constant stress. Wanting to live up to expectations can create a lot of pressure, even for the strongest of people. ENFJs can go into times when they worry too much because they put less focus on their introverted intuition, and lose sight of the path they know is right for them. They become stressed about the details instead of knowing how to look at the big picture and trust in their intuition which can guide them much better than trying to focus on their introverted thinking function.

For the ENFJ sometimes breaking free means taking a break from the things which are causing them too much stress. They need to learn to stop worrying about being perfect, instead they need to trust in themselves and their relationships. They might feel like they need to be perfect to be loved, but this obviously isn’t the case. ENFJs need to put more faith in themselves and the people around them, and trust that they will still be there even if mistakes are made. For the ENFJ to break free from this obsessive behavior they need to let go of some things, and allow people to help them out when they are feeling overwhelmed. They don’t always find it easy to ask for help, but this is something which is necessary for everyone. Learning how to depend on others instead of always bearing the burdens themselves, can help the ENFJ to relax from time to time.