How Approachable Each Personality Type Actually Is 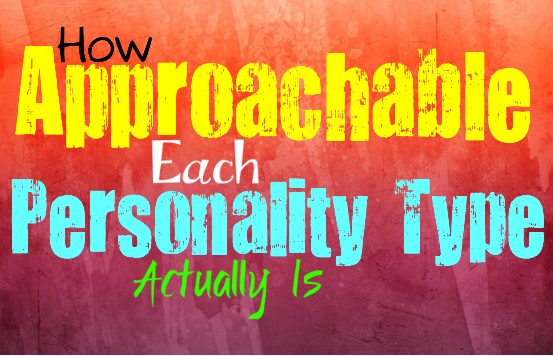 How Approachable Each Personality Type Actually Is

Some people are not afraid to make the first move, and will initiate contact without fear. Others prefer to be approached in order to make new friends- but sometimes their outward expressions are not all that approachable. Here is how approachable each personality type most likely is.

INFJs are often very approachable individuals, and this can be to their own detriment. Since INFJs are introverted, they often desire plenty of time to themselves- they also dislike having their personal space invaded. Their often friendly natures can cause the INFJ to appear much more approachable than they would like. They care about people, and this kindness can often exude out of them in an obvious way. Some INFJs though, might find that they have developed a natural avoidant expression, which can cause people to find them much less approachable. If the INFJ is deep in thought and is not aware of their expression at the time- it can come across as a bit angry to others. It often depends upon their mood, and what is going on inside of their minds.

ENFJs are extremely approachable individuals, and often find themselves smiling at strangers. They have a natural desire to make other people feel comfortable, and this is very easy for them to do. ENFJs can often settle a room, just by speaking a few words. They rarely find that people are nervous to approach them, since they have such a friendly demeanor. ENFJs are outgoing and eager to get to know others- they enjoy being able to help people and make them happy.

INFPs can have a hard time being approachable, and might find that they have to initiate friendships. Their minds are constantly going to different places, which can cause them to show somewhat unusual expressions on their face. People might think the INFP is angry, or even a bit odd- simply from their expressions. This can cause people to be nervous when it comes to approaching the INFP. They often have to approach someone when they are ready, but once they do it is not difficult for them to make friends. If the INFP is too nervous to approach others, they simply have to wait it out until someone is capable of taking a chance that they won’t bite. 😉

ENFPs are often extremely approachable people, with a friendly and charismatic demeanor. They are not afraid to approach others though, and often enjoy making the effort. People usually find themselves comfortable around the ENFP, and are eager to get to know them. They often have an expression that makes them seem very approachable, causing people to be less afraid to do so. ENFPs enjoy getting to know new people, and it is often easy for them to make friends.

In most cases INTJs give off a very unapproachable vibe- this is usually because they do not want to be approached. INTJs enjoy being able to make the first move most of the time, especially if they want to be left alone. They might not even be aware that they are giving people a death-stare- this is simply something that the INTJ does when they are deep in thought. Many people can become intimidated and nervous by their appearance, even if they were initially intrigued by the INTJ. They simply have to smile more and open themselves up, if they want to be approachable to others. INTJs often enjoy being able to make that choice themselves though, instead of having people invade their space.

ENTJs are often very approachable people, although they can be a bit intimidating. They often appear more put together, and aware of their surroundings than some other types. ENTJs are social creatures, which makes it obvious to others that they are willing to be approached. ENTJs especially have a way of making themselves more approachable to people they are attracted to. ENTJs are not afraid to approach other people if they want to be friendly or get to know them- but they also have a rather approachable appearance to them. Unless the ENTJ is having a bad day of course, then they appear much more on edge and might even be intimidating to others.

INTPs can appear unapproachable because their expression is usually extremely pensive. Their minds are constantly running through a million ideas, and sometimes this can show on their face. Many people will find the INTP to be rather intimidating, and might be afraid to actually approach them. If the INTP wants to make friends with someone, they often have to initiate a conversation. It is much easier once people realize that they aren’t as standoffish as they seem on the outside. INTPs simply have so much going on inside of their heads, that they can appear rather intense and even angry sometimes. This causes most people to become nervous around them, and assume that they do not want to make friends.

ENTPs are often approachable in their appearance, especially if they are eager to make friends. They are social people, and are often skilled at breaking the ice. Their penchant for humor and silliness, can often cause people to flock in their direction. ENTPs are easy going and often extremely approachable individuals. Even during the times when they are feeling deep in thought, people find them intriguing and intense. ENTPs rarely have trouble making friends, simply because of their fun and excitable personalities.

ISTJs often have a lot on their minds, and because of this they might not appear approachable. They can sometimes appear like they do not want to be bothered by others, but this can often be true. ISTJs are introverted individuals, and they enjoy having their own personal space. They might appear less approachable, especially if they are not in the work setting. ISTJs often know how to make themselves seem friendlier when they are in a situation where this is required in order to be successful. They simply prefer having their own space, and want to be able to choose who invades this space.

ESTJs are often intimidating people, but they are friendly as well. They have a natural charisma which causes people to enjoy their presence, even if the ESTJ makes them nervous. They often do not need to be approached by others, and are more than willing to make the first move. ESTJs enjoy getting to know people, and are great at being the center of attention. This natural bubbly demeanor, can cause people to feel comfortable approaching the ESTJ in order to get to know them.

ISFJs often have a kind appearance, and because of this they are extremely approachable. People are rarely nervous around ISFJs, and might even feel more relaxed when they see them. ISFJs are often friendly individuals, who enjoy helping others. They might not always be the one to initiate contact, but they often do not have to worry about this. Their welcoming demeanor often causes other people to approach the ISFJ rather easily.

ESFJs are often very approachable people, and enjoy being able to make new friends. Their mood is often written on their face, which makes it a big part of whether or not people feel like they can approach the ESFJ. When they are feeling happy and friendly, people can see this and will be excited to approach them. If the ESFJ is frustrated though, it might cause people to avoid them for fear of making things worse. ESFJs are naturally social people, and they truly enjoy helping others. This often causes them to approach others, before they can be approached.

ISTPs are often deep in thought, which can cause them to appear much less approachable. Their minds are constantly pondering through different ideas, and this can show on their faces. They might appear intimidating to others, causing them to be afraid to approach the ISTP. They are also seen as intriguing to most people- but this might not be enough for them to be more approachable. In most cases the ISTP either needs to be the one to initiate contact, or find someone who is not afraid of their intense appearance.

ESTPs can be a bit intimidating, but their charming nature often makes them approachable. ESTPs usually enjoy making new friends, and this is obvious to those around them. People enjoy approaching the ESTP, and want to get to know them. In some cases though, the ESTP might appear less approachable if they are having a bad or upsetting day. Their mood can often show very clearly on their expression, and they will become much more standoffish.

ISFPs can sometimes appear rather timid to others, especially if they are in a large crowd. ISFPs are friendly and fun people- but this does not always show outwardly. They can sometimes appear like they do not want to be approached, especially if they are feeling too vulnerable in a situation. ISFPs who want to be approached though, can often exude this in a fairly obvious way. It often works as a way to attract someone they are romantically interested in.

ESFPs are extremely approachable individuals, even when it comes to strangers. Their friendly personalities often cause people to feel comfortable getting to know the ESFP. They are social creatures though and will often be willing to make the first move. They want to get to know people, and might even find themselves making small-talk with checkout people- and pretty much anyone that they meet. It is not difficult for ESFPs to make friends, they might even find themselves making more friends than they actually want.