What Are Your Feelings Towards Scheming, Based on Your Personality Type 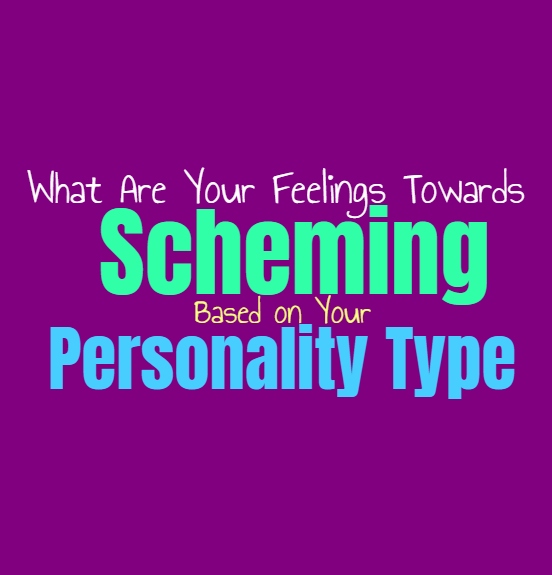 What Are Your Feelings Towards Scheming, Based on Your Personality Type

Some people are deeply troubled with the thoughts of scheming, while others might feel a bit drawn to using it. For some the idea of doing things secretly and plotting in this way feels shady and immoral, while others don’t see it as quite so black and white. Here is how you feel about scheming, based on your personality type.

INFJs don’t usually find themselves drawn towards scheming, since the idea of doing things in an underhanded manner can feel shady and immoral. While they might feel against this, there can be times when scheming somehow seeps into their lives. INFJs can sometimes find themselves scheming, but it isn’t always intentional or malicious. INFJs just find themselves wanting to sway a situation or possibly scheme in order to help someone. They might not entirely realize that they are doing this, but they do have a hard time not meddling when they think they can help.

ENFJs do sometimes find themselves scheming, but not often in a malicious manner. They do sometimes scheme to get things done or to help people they love. If someone is making poor choices and the ENFJ knows they can help, they might find themselves scheming in order to help them. They really want to make a difference in the lives of the ones they love, and so they sometimes scheme behind their backs in order to find ways to help them and change their lives for the better.

INFPs don’t often like scheming and are usually against the idea of doing this entirely. They have strong inner morals which causes the INFP to process things in their own very personal manner. When it comes to scheming, even in positive ways, this often feels dishonest and shady. They want to be someone their loved ones can trust, and so hiding things from them feels deeply wrong to the INFP most of the time. For them scheming means having to keep a secret about your plans because you likely should not be doing them.

ENFPs do sometimes find themselves scheming, but only in harmless ways. Most of the time this lasts for a short time, since they can’t keep things hidden from people they care for. ENFPs don’t like doing anything in a shady manner, and don’t want to feel like they are planning something behind someone’s back. They can do this in a more playful manner, but it can only last so long before they confess to everything they have been doing. ENFPs just don’t like being dishonest and have strong inner morals which often prevent this.

INTJs do sometimes see the need for scheming, especially when it is going to efficiently help them get something done. They don’t feel like this is immoral or wrong, since they believe in working hard to get things done and sometimes this means keeping things secret. INTJs just don’t need to share every detail with others, to them keeping things behind the scenes is not dishonest. They believe in using their minds to figure out the best solutions, which occasionally means a bit of scheming.

ENTJs do sometimes feel like scheming is useful, since not everything can be done upfront. They can be business minded people, and in these situations they aren’t against scheming to make the right moves and get things done. ENTJs just believe in being efficient and do believe in advancing in their careers without feeling a sense of remorse for their sometimes aggressive methods. ENTJs don’t do things in an immoral manner, but to them a bit of scheming isn’t necessarily a bad or wrong thing.

While INTPs prefer to be sincere and honest about most things, they do sometimes scheme in order to get things done. Since they are such personal and internal people, and so sometimes their thoughts and focus on analysis can cause them to appear to be scheming. They might do things without really needing to consult with others, wanting to set up their plans and figure out how to ensure that they are following the right path on their own terms.

ENTPs aren’t really against the idea of scheming, since it can be useful to them in some situations. They don’t want to scheme in a harmful manner, but they do sometimes feel it can be useful in uncovering information or getting things done. For the ENTP a bit of scheming just means they are doing things in a more private manner, without really exposing their plans or ideas to those around them. Scheming can be a good way to surprise people, or even uncover information without people expecting this.

ISTJs don’t really like scheming since they would rather be upfront about things. They are rather straightforward people, who strive to get things done the right way. They often have firm inner morals, and so they don’t want to go against what they believe is good and honest. There are some situations where a bit of scheming might be the most logical path, and if this isn’t harmful or shady then the ISTJ is likely to be more accepting of it.

ESTJs don’t mind a little scheming in order to get things done and finish the job right. They value efficiency and for them certain things are excusable if they aren’t harming anyone. When it comes to business and getting things done, they don’t allow anything to stand in their way. Sometimes it is perfectly reasonable to scheme in the eyes of the ESTJ, especially when they are focused on doing something truly important.

ISFJs don’t usually favor the idea of scheming since they don’t want to do anything which can seem dishonest. There are times when a bit of scheming can be helpful though, and so they might take part in this. They care about helping others, but people won’t always accept their help or want to. The ISFJ might scheme a bit so that they can assist someone they love without that person knowing that they are doing this.

ESFJs don’t like scheming in ways that might hurt someone, but they may feel differently about scheming which won’t cause anyone pain. ESFJs want to help their loved ones and sometimes they might have secret schemes and plans in order to do this. If someone is not openly going to  accept their help or advice, they might do this in a more underhanded or hidden manner. ESFJs just want to be able to get things done and tend to the needs of their loved ones and so a bit of scheming might help them out in these situations.

ISTPs don’t really care if they are seen as scheming, since they like to do things on their own terms. ISTPs follow what feels right and is most logical in the moment, which does occasionally mean scheming to get things done the right way. ISTPs usually don’t need to scheme, since they keep to themselves and get things done their own way. They rarely need to meddle in order to make things work the way they want, but they aren’t against it.

ESTPs do sometimes scheme just a bit, especially when they are trying to achieve something. They don’t want to allow anything to hold them back  and sometimes this means scheming a bit. They want to be able to follow what feels right in the moment and don’t always consider the consequences beforehand. ESTPs sometimes want to scheme to get things done or to follow a certain path which excites them, even if they might regret it a bit later on.

ISFPs don’t really like the idea of scheming, since this feels dishonest to them. They strive to be sincere people and care deeply about the morals they have. For the ISFP scheming just seems wrong and not something they feel okay dealing with. They try to avoid scheming, especially when it comes to doing this towards their loved ones. They want to be completely transparent with the ones they care for, always striving to be honest.

ESFPs don’t mind a bit of scheming in order to get what they want or even help someone they love. They don’t mind doing things in the moment to make something happen, even if it seems a bit scheming for those around them. ESFPs live in the present and follow whatever inspires them and feels right in that moment. Sometimes this means forgetting to really think about consequences but they have to follow their hearts.