INTP Motivation: How the INTP Can Overcome Procrastination 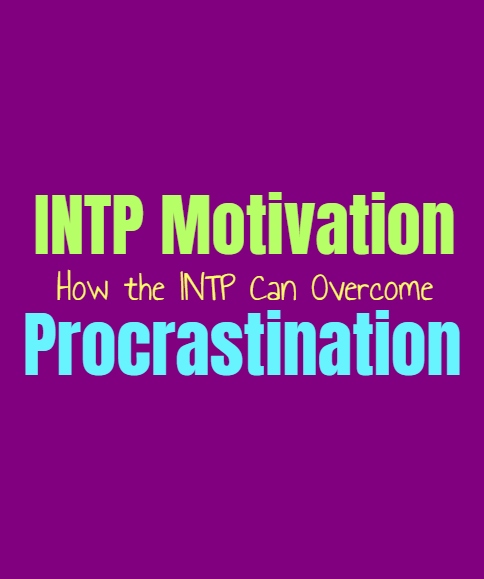 INTP Motivation: How the INTP Can Overcome Procrastination

For INTPs finding motivation can be a bit challenging at times, for a few different reasons. They do have a tendency to procrastinate certain chores and tasks they are required to finish. For them often feeling like they have to get something done is likely to make them feel more exhausted by the situation. INTPs are capable people but they do struggle with procrastination and sometimes a lack of motivation when it comes to certain tasks.

Why INTPs Struggle with Motivation

INTPs struggle with motivation for various reasons, one of which is their lack of interest in certain tasks. They become bored rather easily, especially if something doesn’t keep their minds challenged. Because of this there are certain tasks which bore the INTP and leave them wanting to find something else more inspiring. Because of this they might procrastination or completely lost interest in trying to finish these certain projects which really just don’t keep them interested. When they feel this complete lack of motivation, the INTP might find themselves bouncing around to different projects in hopes of finding something a bit more interesting and mentally stimulating.

INTPs also struggle with things which feel like an obligation, and finding motivation to finish these projects really can be stressful. Often when the INTP feels like they are required to finish something, it becomes draining and much less interesting for them. They don’t enjoy these types of obligations or the pressure the perform a certain way. They would rather focus on things which make them feel energized and excited about the project at hand. Although INTPs might even lose interest in these projects after a while, especially once they feel like they have gained enough from them, or already solved the major problems.

INTPs do sometimes fear failure, and so they hesitate to follow through with some things. When they are afraid of failing or being unable to do something right, they might procrastinate until the last minute or even a bit later than that. For the INTP this fear of failure comes from wanting to be able to analyze all of the information and really make the right steps forward. They know that they can figure out these problems, might sometimes their ability to see all of the angles can cause them to overthink what they are dealing with. They can see where things might go wrong and so they struggle to really progress or find the motivation to keep moving forward.

INTPs also have vivid inner minds, and this can cause them to become more caught up in analyzing and thinking about the project, than in actually doing it. They might lack the motivation to take action, but don’t lack motivation to analyze and problem solve inside of their minds. They might spend so much time thinking about the project, and so they burn themselves out and don’t really have the same interest in following through after this. INTPs have such rich inner minds which can actually be distracting at times, and draws them away from the world around them and in taking action. This does sometimes affect their personal motivation and they find themselves struggling to really fight their procrastination.

For the INTP overcoming procrastination can be challenging, and is often something they struggle with throughout their lives. One of the means of helping them to get certain tasks finished, is by setting more scheduled projects and chores in their lives. INTPs cannot live in an environment where everything is schedule and organized, but that doesn’t mean they cannot handle the occasional timers or set schedules. To help them get the more important tasks finished, they might need to begin developing these habits. As long as the INTP has plenty of other freedoms and situations where they don’t have to follow rules and schedules, then this won’t affect them negatively but rather it will help them improve things which they may be struggling with. What the INTP needs to do is figure out certain things to set timers for, and keep themselves on a schedule with those tasks in order to get themselves focused.

Incentives are also useful when it comes to helping the INTP get things finished. They often experience guilt over not doing certain important things, and so they don’t really enjoy their downtime quite as much. The INTP can often have certain incentives tied to these tasks, rewards which they give themselves but only once they have completed their requires chores or tasks. This can be something which isn’t necessarily fun for the INTP, but it can help them to get things done which are important.

INTPs do sometimes find motivation with the help of others, someone who helps inspire them. If they can team up with someone who is good at getting these more mundane tasks done, or at least good at helping keep a sense of organization, it can be useful for the INTP. It gives them more room to not feel stressed about these things, and being able to collab with someone really can take off the pressure. A partnership might be challenging for the INTP at first, but with the right person it can really help them avoid procrastination and work towards getting things done much better.

INTPs are imaginative people, and part of their rich inner minds is why they can struggle to find outside motivations. In some ways they can grow their weaker functions and find tricks to improving their procrastination troubles, but in other ways they shouldn’t try to change themselves too much. INTPs might not always be great at keeping up with schedules or of completing certain projects, but they are imaginative people who are capable of thinking outside of the box. This ability to see things from so many different angles is part of what makes the INTP so capable of achieving great things. They can often solve the problems others cannot, and find ways of approaching things and discovering things in such unique ways. While their minds and sense of imagination can occasionally pose challenges for them, that doesn’t mean they shouldn’t value the positive aspects of this as well.