Here’s How You Would Handle Being a Journalist, Based on Your Personality Type 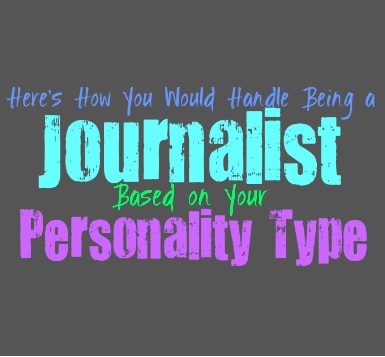 Here’s How You Would Handle Being a Journalist, Based on Your Personality Type

Journalism is definitely a challenging career choice, with many ups and down in the process. Some people can bring a unique perspective to the job, with their own talents which help them along the way. Here is how you would handle being a journalist, and what you’d bring to the table, based on your personality type.

INFJs can often have certain elements of their natural personality which make for great journalism skills. They are usually great writers, with quite the wordsmith abilities. INFJs like being able to express themselves through the written word, but they also enjoy telling stories. INFJs have strong intuitive abilities which can help them uncover the truth and figure out how to write this out for the rest of the world. INFJs can also take part in different interviews, and can connect with people in a way that helps them to open up. While there are some extraverted requirements of a journalism career, INFJs can often overcome these hurdles in order to do their job well.

ENFJs are usually excellent in a journalistic career, especially the aspect of going out and uncovering a story. ENFJs are social people who can often connect with others in a way that helps them open up. This is a great skill for a journalist, since it provided them with the ability to uncover a story from someone who would normally keep quiet. It also helps them know how to write the story so that people will actually be able to connect with it and feel intrigued by what the ENFJ is sharing. They definitely make for good journalists, and can often find ways to get whatever they want out of people.

The biggest appeal to a journalism career for the INFP, is often the ability to uncover the truth. They have strong inner morals and they believe in making a difference. Being a journalist can often be a way for them to uncover stories and try to really facilitate a change in the world around them. INFPs can struggle with motivation and deadlines sometimes, which is often their weak point as a journalist. For them it can be exciting to be able to do something that can really change the world, and they are often passionate about writing as well.

For ENFPs the idea of being a journalist can be thrilling, as long as they are doing something a bit more intense with their career. They don’t want to sit around doing basic interviews or articles about local small time stories, ENFPs often want more. They enjoy the thought of being able to uncover a more serious truth, one that could potentially stir things up. ENFPs want to live passionate and exciting lives, and to them being able to write about things that can actually make a difference, this can feel truly rewarding.

INTJs definitely value the ability to uncover the truth, which is something that would make a journalistic career appealing to them. Their ability to figure out the truth and the facts is something that would definitely help them be good at their job. They are often capable of mastering skills that they take on, and so they do have some abilities that can help them as a journalist. They also can be proficient writers, and know that the story needs to be a bit more exciting and entertaining for people to actually read it. Where INTJs might struggle is a sense of empathy, which can sometimes throw them off in this career.

ENTJs are focused and driven people, who strive to accomplish their goals. If a career in journalism is something that inspires them, they are often fairly good at getting the job done. For ENTJs the appeal often comes from the challenges of being a journalist, the fact that they need to work to uncover the truth and actually obtain a valuable story. They often want to write pieces that really get to the bottom of things, and can often be a bit punchy with the way they deliver their stories.

For the INTP a journalistic career can feel a bit draining after a while, but their intuitive abilities often help them. They do favor facts and believe in doing whatever they can to uncover the truth. For INTPs it is about research and learning the details of a situation, which would definitely help them with investigative journalism. They do like telling stories as well, but the hardest part of them can be the empathy or expressing themselves in ways that other people can connect to.

ENTPs might enjoy journalism for many different reasons, especially being able to come up with their own stories. They are creative people who like being able to dive into this side of themselves. They also like being able to shake things up, and so that is likely to help them come up with stories that can really excite their readers. ENTPs also have a way of connecting with people which can help them deliver the story in a way that excites and entertains their readers.

ISTJs are researchers by nature, which can definitely benefit them in a journalistic career. They will likely be good at looking into the story and uncovering as much information as they possibly can. ISTJs like being able to uncover the truth and would take their career very seriously regardless of what it is. They are motivated people which helps them when it comes to learning how to be capable at their job. For ISTJs the struggle in journalism can be having to constantly communicate with others in an empathetic manner.

ESTJs might not really enjoy a career in journalist, unless they see plenty of room to improve and advance. For the ESTJ they need to be able to advance and constantly improve in their situation. ESTJs can often bring their research ability to the table and their motivation to constantly move forward. They are strong-willed people who go after their goals and do whatever it takes to make things happen efficiently.

For the ISFJ being a journalist can have some more frustrating aspects to the job, but there are things they might be able to bring to the table as well. ISFJs are good at empathizing with others, which can help them when it comes to interviews and getting the more in depth answers. As journalistic they can often do a great job at connecting with others, and finding ways to share their story in a way that makes them feel rewarded.

ESFJs can often do well in a journalistic career, since they can easily empathize with others. Their ability to connect with people can often help them get the truth and even obtain a good interview. They also have a way of expressing these feelings in writing which can make for a great story. ESFJs sense of empathy does often help them in a journalistic career, but there are certain aspects which can become a bit draining for them after a while.

The ISTP journalist often favors their ability to uncover the facts, especially since this is what they are most interested in. For them being a journalist can be draining though, especially if they have restrictions on what they can write about. ISTPs do like a sense of freedom in their choices, and want to be able to experience new things. For them there are definitely benefits to journalistic career, but they might become bored after a while.

ESTPs enjoy uncovering facts, and their charming personalities can definitely help them in some ways. They do whatever they can to progress and learn, which does help them in just about any career they are in. For ESTPs the sense of adventure can be exciting and the opportunity to look for stories that others might be able to find. Where they do struggle is the organization, since ESTPs can become distracted and lose interest in some things.

ISFPs might find the idea of a journalistic career a bit draining, especially if they have to write about things that don’t inspire them. Having to report on different situations and stories that simply don’t stimulate them emotionally, can be a bit draining for them. ISFPs do enjoy being able to tell the truth, but having restrictions is something that will definitely cause them to feel frustrated and drained.

For the ESFP being a journalist can be a bit overwhelming at times, but they do have a strong sense of creativity. They are often good at coming up with new ideas and potential stories to write about. They often have plenty of different ideas running around in their minds, where they struggle is organization. ESFPs can have a hard time keeping things organized and making deadlines, but they are good at expressing their thoughts and connecting with others this way.