ENTP Loyalty: What Being Loyal Means to the ENTP 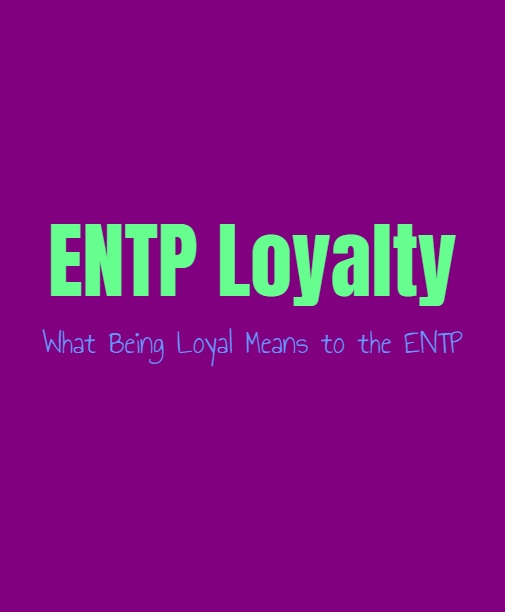 ENTP Loyalty: What Being Loyal Means to the ENTP

ENTPs do value loyalty, they just have their own definition of what this means to them. They have certain values which they hold as important, and for the ENTP things might not always be defined the way other people see them. They follow their own path and their own minds for these things, and often make choices which are based on their inner thoughts and logic. This can cause the ENTPs sense of loyalty to be hard for others to fully comprehend, since their definition just isn’t quite the same. While they do have certain morals and inner values, the ENTP just doesn’t necessarily respond to things the same way as expected.

What Loyalty Means to the ENTP

For the ENTP loyalty is something which has to be earned and is not just given naturally once they become close to someone. For some people, loyalty is part of a packaged deal, but for ENTP this is a process and something which needs to be fed continuously. Loyalty should be built upon as the ENTP starts to trust someone and respect them more. They don’t just grant this to people and it is actually difficult for the ENTP to trust someone enough to be completely loyal to them. This is because they often feel like people aren’t truly giving this loyalty and so they don’t deserve to receive it in return. While for some this seems like a conditional idea of loyalty, it is simply what the ENTP values and how they give this to others. Without protecting themselves they feel like they are being foolish and just allowing others to take advantage of their kindness. This is why their logical minds come into the situation, and they evaluate their ability to be loyal based on how others behave.

The fact that trusting is difficult for the ENTP, makes it challenging for them to ever truly feel like a person is loyal to them. Even when they see signs that someone is supportive and cares for the ENTP, they might experience doubts. Until the ENTP can overcome these doubts and their skeptical nature, it can be a constant battle to ever real feel a sense of loyalty in their relationships. That doesn’t mean it is impossible, it just means that these things are not natural for the ENTP and so it requires change and growth for them to really get to this point. They will want to put forth that effort once they get close to someone, but it can be a process for them to really trust and open up enough to give this loyalty fully.

For the ENTP respect is something which comes from being loyal to someone. Without truly respecting someone and trusting in them, they don’t feel like loyalty exists. Once of the biggest signs that the ENTP is fully loyal to someone, is when they are willing to show that they respect their choices and their knowledge about something. The ENTP also allow this person to handle things they would normally want to take care of themselves. When the ENTP does feel loyal and committed to someone, this is something which will last as long as it makes sense. When they have people in their lives who aren’t willing to grow and continue making progress, it can be hard for the ENTP to stick around. They care and don’t just toss someone aside when they are struggling, but someone who does not make an effort can be rather draining for the ENTP. When they are close to people who are constantly making excuses for their poor choices, the ENTP starts to lose the loyalty and respect they once had for someone.

The thing about ENTPs is they can be naturally skeptical, which does cause them to expect betrayal fairly often in their lives. The ENTP might already be preparing themselves for the betrayal, which at times is more a self-fulfilling prophecy than they realize. When they expect the worst from people they find themselves drawn to those who really don’t deserve their trust or loyalty. This is something the ENTPs might do as a defense mechanism, since it is easier than turning to people who they have to be open and vulnerable with. This is what often causes them to have their doubts about their connections, and they might not be all that hurt when they are betrayed.

When the ENTP does truly open up to someone and trust them, this is an entirely different story. They won’t be quite as calm if they are betrayed by someone they love and trust, instead it can be rather painful for them. Since they don’t open easily, when the ENTP does expose themselves to someone else they really feel heartbroken if that person does not take this seriously. The ENTP is likely to struggle with this for a while, wanting to find ways to make the situation right but eventually realizing that they need to move onto someone else who has not betrayed their trust and love.