ENTJ Under Stress (Shadow Mode): The ENTJs Unhealthy Dark Side 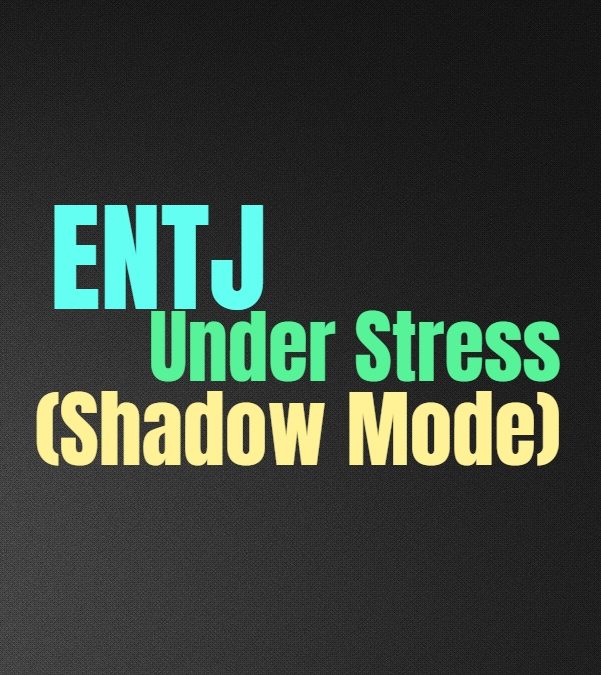 ENTJ Under Stress (Shadow Mode): The ENTJs Unhealthy Dark Side

When it comes to times of extreme stress and change, it can be challenging to remain in the same structure as usual. Many people can go into their shadow when they are feeling extremely stressed or undergoing trauma in their lives. This makes it challenging to remain confident in one’s own abilities, causing them to search for other means of getting things done. For the ENTJ it often takes a lot of outside stress and pressure for them to go into this state of being, forcing them into their shadow mode.

The dominant function of the ENTJ is their Te (extraverted thinking), which causes them to pick up details around them. ENTJs focus on facts and evidence rather than emotions or inner feelings. They care about ensuring that they are finding the right information and want to follow the correct path. For the ENTJ it is important to be sure about things and use all of the information at their disposal to get it right. ENTJs are also very efficient people who value being capable of getting things done the right way the first time around. If there are mistakes made they can become impatient with this, and this often comes from their Te which causes them to be direct people who focus on the results.

The auxiliary function of the ENTJ is their Ni (introverted intuition), which is what helps the ENTJ make future predictions about things. While they process things in a logical manner, they also are highly intuitive people. They catalog information and process it in a subconscious manner, but this gives them a firm grasp on the most likely outcome of things. When the ENTJ combines this with their logical thinking processes it really helps them to problem solve and create patterns. They can often come up with the most strategic path to take, and they can be good at this based on these natural functions.

The tertiary function of the ENTJ is their Se (extraverted sensing) which does make them drawn to aesthetics a bit. They can be drawn to things which are beautiful, which is why many ENTJs enjoy art and artistic abilities. They might not be great with constant physical things, since this isn’t their dominant function or focus. At the same time it is still something which is important to them, and does play a role in their lives and behaviors. ENTJs do enjoy visual things and want to pay attention to the world around them when they can.

The inferior function of the ENTJ is their Fi or introverted feeling, which is definitely used differently for them than with someone who uses it as their dominant function. For the ENTJ this inferior function is what helps them hold onto a sense of inner morals and confidence in their choices. Most things are filtered through facts and proven methods, and this is much more important for them. They might focus more strongly on facts and logic, but they do have an inner sense of morals and believe in following them.

ENTJ In Their Shadow

The dominant function of the ENTJ is normally their Te, but instead they become focused on Ti (introverted thinking). The ENTJ attempts to search inward, looking at the facts in a way they normally would not. They search for answers by analyzing the situation over and over again. Instead of being their confident selves capable of finding the answers, the ENTJ starts to question these answers. They analyze the information over and over again, in hopes of finding the solutions which are better or different than the proven methods. Usually ENTJs would focus on these proven methods and trust them but in their shadow state they no longer have that same faith and belief in these facts. Instead they second guess and attempt to find the answers, struggling to do so and finding themselves doubting their own abilities.

The ENTJs Ni becomes Ne (extraverted intuition), which also causes them to lose faith in themselves and their natural abilities. Their sense of intuition might be challenged by someone, hurting their ego and sending them into this shadow state. When this happens they start to search for answers outwardly, wanting to make patterns and conclusions from the information. The ENTJ starts to look at the many different possibilities, instead of trusting in their natural abilities and knowledge. They want to use this Ne to find outside patterns, but instead it can cause them to feel overwhelmed by all of the different potential paths and outcomes.

Their Se is normally focused on the physical world and the present, instead this becomes Si (introverted sensing) which focuses on the past. The ENTJ will likely start to analyze every past experience and mistake, blaming themselves for the times these things went wrong. They likely only see the negative instead of the positive, and have a hard time remembering things accurately. They will see these past details, ripping apart each situation and looking at how they have likely failed or not been able to handle the situation the way they should have. This manifests as a sense of self-doubt, causing the ENTJ to blame themselves for what went wrong, or possible blame others as well.

The inferior function of the ENTJ is naturally their Fi, but instead this becomes Fe or extraverted feeling. The ENTJ starts to question others, constantly feeling like they are judging them and their choices. They look outward towards the desires of the group far more than usual, wanting to do what they think will please them. At the same time this can turn into resentment for the ENTJ, feeling as if everyone expects something from them which they cannot quite accomplish. This Fe becomes more toxic than it does helpful most of the time, since the ENTJ does not naturally use this function and instead prefers to focus on their own morals.

These shadow functions are often forced into play when the ENTJ is under extreme stress or trauma. If something serious occurs they can sometimes shift into this shadow mode, making them act and feel much different than normal. They likely still show signs of their normal self, but many of their behaviors are unpredictable and possible erratic in comparison to the usually level-headed and focused ENTJ. They are normally confident and capable people, but in this shadow mode they become much more insecure and constantly seem to be doubting their own actions and decisions in life.

The ENTJ can also go into this shadow mode if their motives or abilities are called to question. When it feels like their actions are not coming out as they want and their normal way of handling things is not working, they find themselves forced into this shadow mode. The ENTJ is likely searching for answers and other ways of accomplishing these goals, especially if what they would normally do is just not working the way they expect it to.