ENFJ Under Stress (Shadow Mode): The ENFJs Unhealthy Dark Side 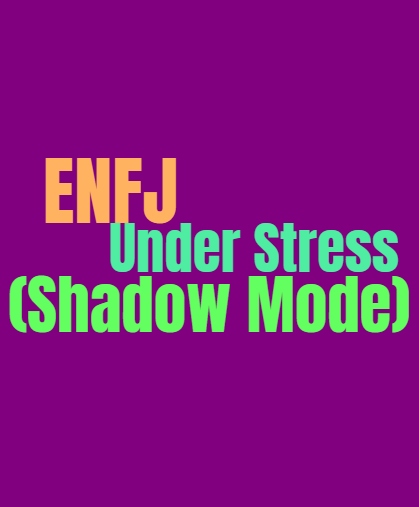 ENFJ Under Stress (Shadow Mode): The ENFJs Unhealthy Dark Side

For the ENFJ high stress situations tend to happen somewhat often, since they take on a lot of responsibility themselves. This can cause the ENFJ to feel overwhelmed if it goes on for too long without any type of reprieve. They try their best to maintain the balance and tend to the needs of everyone in their lives, but this can become overwhelming for anyone. For the ENFJ having to constantly take care of others causes them to neglect their own needs, which can be the very reason they go into their shadow for a while. This can cause the ENFJ to behave much differently than they normally do, and is often confusing for their loved ones and themselves.

The dominant function of the ENFJ is their Fe (extraverted feeling) which causes them to be very focused on the emotions and needs of others. ENFJs have a natural and often powerful sense of what other people are feeling and experiencing. They care about the people around them and strive to make them happy and please them in any way they can. This causes the focus of the ENFJ to be more on those around them and what they want, rather than looking inward for things. They don’t really focus much on their own wants and needs, but rather towards creating harmony in their environment and ensuring everyone around them is properly cared for. While this function causes the ENFJ to be caring and compassionate, it can be what causes them to burn out sometimes.

The auxiliary or second function of ENFJ is their Ni (introverted intuition) which is more prominent for them than people realize. This function really helps the ENFJ find solutions to their problems and figure out the best path towards the future they want to create. They care about doing the right thing for their loved ones and will go above and beyond to make them happy. ENFJs work really hard for those around them, and they use their sense of intuition to gain perspective. This intuition takes in information and subconsciously works through all of this in order to come up with predictions for most likely future outcomes. This helps the ENFJ connect with people even more, since they can get an idea of how to help them in so many ways.

The tertiary or third function for the ENFJ is their Se (extraverted sensing). For the ENFJ this can be a difficult function to connect with sometimes, since they naturally focus on what is going on inside of their own minds. They sometimes use this to recognize changes and things about their loved ones. They can notice little difference in their appearance, and use this as a way to understand and even show appreciation for them. There are some connections to the physical world which can be hard for the ENFJ, but they do have an appreciation for things which are beautiful. This comes from their Se, which is naturally more in tune with things which are visually aesthetic.

The inferior or fourth function of the ENFJ is their Ti (introverted thinking). This is the way in which the ENFJ processes facts and information, but they don’t allow this to control most of their behaviors. They still store and retain this information and when they are focusing on something which requires directness, they certainly utilize this Ti. It isn’t that the ENFJs thinking function is not important to them, they simply focus more on their dominant function and care about being sensitive to the needs of those around them. Sometimes they will push aside the more logical choice, because they want to be sure they don’t hurt someone’s feelings.

When the ENFJ is in their shadow their dominant Fe becomes more focused on Fi (introverted feeling). For the ENFJ focusing inward isn’t quite as natural when it comes to their own emotions and inner needs. They are much more focused on caring for others, so when this happens it can turn on them in less healthy ways. The ENFJ can focus on self-blame, and this inner voice becomes a somewhat negative one. Instead of looking at themselves and searching for their own beliefs, when they are in their shadow they become angry at themselves. They might never feel good enough, constantly judging their own choices and actions. This can also cause the ENFJ to appear much more judgemental of those around them, only seeing their flaws where they would normally see the good in them. This makes it difficult for the ENFJ to be around others, since normally they are affectionate and compassionate people.

The auxiliary function of the ENFJ shifts from their usual Ni to using Ne (extraverted intuition). While the ENFJ is normally connected to this inner intuitive ability, they might start to search for outside patterns instead. If they have felt this intuitions challenged by people who want some sort of evidence, they may feel under attack. When this happens the ENFJ starts to search for outside patterns and answers to explain their conclusions. They try to search for these means of understanding themselves in ways they normally would not. This can actually cause more confusion for the ENFJ, since they start to see far too many potential outcomes and patterns. Seeing all of these potential outcomes is not natural for the ENFJ, since their Ni helps them find the one best suited for them without needing to search outwardly so much.

The tertiary function being Se, starts to shift towards Si (introverted sensing). This isn’t natural for the ENFJ and so it can turn a bit unhealthy when they are in their shadow. This can cause the ENFJ to look at past connections and memories in a more negative light. Instead of being able to see the good things they have accomplished or experienced, they only recognize the bad and the pain. They might draw out traumatic situations, even remembering the details far worse than they actually were. This causes the ENFJs sense of the past to be far more critical, and can make them fearful of moving forward as well.

The ENFJ Ti becomes shifted towards Te (extraverted thinking), which makes them much more critical. The normally sensitive and considerate ENFJ, becomes direct and even aggressive. In hopes of getting things done efficiently they become short-tempered and might find themselves snapping on their loved ones. This can be the most toxic of their shadow functions when it is in full focus, causing the ENFJ to only see their goals and nothing else. They become focused on details and facts, wanting to get things correct but not entirely being capable of seeing the big picture. They become on edge with people who aren’t doing things perfectly, which is very unlike their usual behaviors.

This shadow mode often occurs when the ENFJ is under extreme stress and their own needs have been unchecked for too long. They find themselves feeling on edge constantly, and cannot quite find the balance in their daily lives. They go in their shadow in order to shift or force a change in their lives, but it can certainly be a messy process for them. When the ENFJ is in their shadow they do not feel like themselves, and often need time away from others and the stress in their environment.

This can also occur when it seems like the ENFJ normal means of accomplishing goals just aren’t working or are being constantly challenged. In this situation the ENFJ may need to retreat and find other means of solving these struggles. It can certainly be presented in unhealthy ways, and might cause the people around the ENFJ to feel concerned for their behaviors. The ENFJ likely needs time away and needs to find a way of recuperating from whatever has dragged them so far down into their shadow.