Do You Trust Your Instincts, Based on Your Personality Type 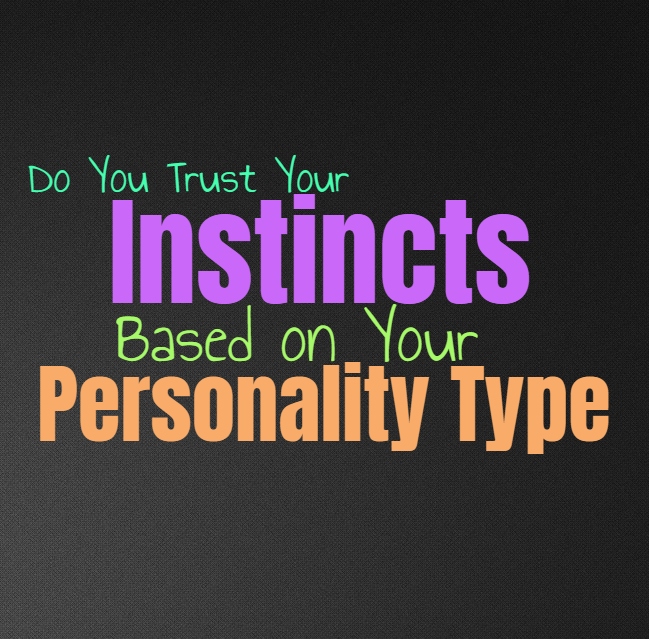 Do You Trust Your Instincts, Based on Your Personality Type

Some people have a hard time trusting their instincts, while others believe in always following what they feel inside or even consider to be their intuition. Here is how much you trust your instincts, based on your personality type.

INFJs do often follow their natural instincts, and they function best when they do this. INFJs do sometimes doubt themselves and second guess these instincts, which is when they start to struggle in their lives. They have strong intuitive abilities, they just don’t always trust in themselves enough to really rely on these strengths. The INFJ who does learn to trust their instincts will do very well in predicting future outcomes and following a path which inspires them the most. For the INFJ trusting their instincts is important, as long as it is more connected to their intuitive abilities.

ENFJs believe in trusting their instincts, and can be surprisingly good at following them. ENFJs want to focus on doing things the right way, and care about providing for their loved ones. To them getting things right is important, and this is often the thing that holds them back from trusting their instincts. ENFJs can doubt themselves because they don’t want to make mistakes, and will overthink the situation instead of trusting in themselves. They are intuitive people who often have a strong sense of what moves to make, but sometimes they struggle to trust this when they are concerned about failing.

INFPs do often trust their instincts, but this is often lead by their inner emotions. The most instinctual and natural thing for the INFP, is to follow their inner morals and emotions. They believe in doing the right thing and for them this is truly important. INFPs don’t like allowing others to lead them astray, they want to follow their own instincts and personal belief system. For them it isn’t about being superior, it is simply about doing what comes naturally and following what is right to them.

ENFPs do often trust their own instincts and don’t like allowing people to inspire doubt in themselves. ENFPs believe in doing what is right and have a strong moral compass. They go with whatever they know to be the right path for them, even if sometimes it seems odd to others. The ENFPs instincts are lead by a strong intuition, as well as a set of inner morals and emotions. For the ENFP these things are combined to give them and idea of where they should go, and they believe in following this without reservation.

For the INTJ following their instincts means following their power intuitive abilities, but they don’t like using this alone. INTJs believe in combining their intuition with the facts that they have dug up and sifted through over time. They want to be sure they are doing things right, and so INTJs are more factual than they are instinctual. They do trust their intuition, but they believe in using their minds to think things through before just jumping in. INTJs don’t believe it is smart to just use their instincts, instead they want to really analyze all the information at hand.

ENTJs believe in trusting their instincts, but they don’t believe in doing this blindly. For the ENTJ it isn’t about self-doubt, it is simply about analyzing all of the information they have. They use their intuition in order to figure out which information they can trust, and which things are completely useless to them. For the ENTJ it is valuable to use their instincts, but they also want to be smart about their choices and not just jump into things without analyzing and looking at everything from a different point of view.

INTPs sometimes struggle to really trust their own instincts, even if they probably should. INTPs analyze everything they do, and so sometimes this causes them to overthink things. They might start to have doubts about what they should do, since they don’t always believe in trusting their instincts about things. INTPs want to look at the facts and try and analyze the information before making the next step. They can become a bit frozen in this analysis though, since their minds can figure out so many different paths and outcomes.

ENTPs do believe in trusting their instincts to some extent, but they also believe in analyzing the information they unearth. For the ENTP it is important to combine their natural instincts, with their ability to analyze the information, and so this is what helps them come to more useful conclusions. ENTPs don’t want to avoid trusting in their natural intuitive abilities, and so they do go for things sometimes without needing to analyze it to death.

ISTJs prefer to trust facts more than instincts or anything to do with feelings. They believe in following proven methods in order to get things done as efficiently as possible. They don’t want to simply follow instincts because they don’t necessary trust where this comes from or what it means. ISTJs follow the truth and believe in looking into the facts of a situation before moving forward, since they want to be sure about things.

ESTJs do believe in trusting their own instincts to some extent, but for them it is far more important to follow facts of a situation. They do what they believe is the smartest choice, and believe in following proven methods in order to do this. ESTJs value efficiency and don’t like just doing anything which might risk this. For them it is important to always look at the situation from the most logical point of view, and not allow feelings to get in the way.

ISFJs don’t necessarily believe in trusting instincts with everything, as much as they believe in following their goals and what they can observe in the situation. For the ISFJ the most important thing is creating a sense of harmony in their environment, and doing what is right for their loved ones. The things which come instinctually for the ISFJ, are often the emotions and needs of those around them. They do believe in focusing instincts which tell them how to properly care for their loved ones, since this is what they value most.

ESFJs do follow their instincts to some extent, but they often question or doubt themselves. ESFJs don’t want to make any mistakes which might harm their loved ones, and believe in being sure before jumping into something. Sometimes the ESFJ instincts do take over, and they will be more willing to take chances on something they feel is right. For them though, it is frightening to do anything which might jeopardize or disappoint someone they love, and so they try their best to avoid this.

ISTPs definitely believe in trusting their instincts, and following what feels right in the moment. While ISTPs do base a lot of their choices on facts, they also believe in just following what they are most inspired by. They follow their instincts because they want to explore them and figure out where it might lead. For the ISTP it is best to just live in the moment rather than become caught up with potential ways it could go wrong.

ESTPs definitely trust their instincts and believe in following what feels right in the moment. While ESTPs do also believe in looking at the facts of a situation, they are very much lead by their instincts. ESTPs can sometimes seem reckless or spontaneous, and this is certainly because they follow where their instincts might lead. ESTPs live in the present instead of trying to obsess over the future too much.

ISFPs definitely follow their instincts, where they might lead. They believe in following their hearts and doing whatever inspires them most in the moment. ISFPs don’t want to become hung up on analyzing things and overthinking, they instead just want to go where they feel they should. They go where the inspiration is, and where they feel the most joy and excitement towards something new.

ESFPs follow their instincts more than anything else, going where it might lead. They live in the present moment and don’t like getting hung up on doubts or questioning where they should go next. For the ESFP it is best to follow their hearts and do whatever inspires them most in the moment. For them it is rewarding to trust their instincts, even if this sometimes gets them into sticky situations.