Do You Have a Tendency to Burn Bridges, Based on Your Personality Type 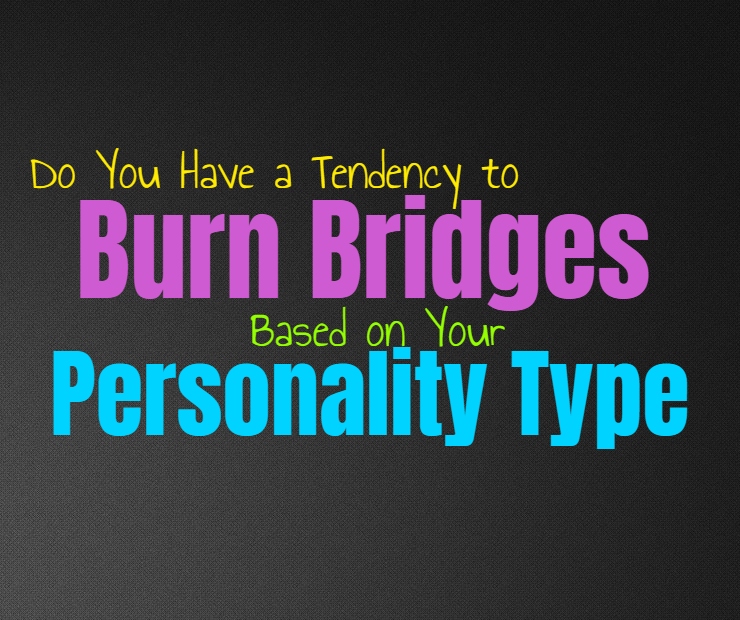 Do You Have a Tendency to Burn Bridges, Based on Your Personality Type

Some people are more likely to burn bridges or cut people out their lives. Sometimes this is intentional, other times it is simply because they can rub people the wrong way. Here is how likely you are to burn bridges, based on your personality type.

For the INFJ burning bridges isn’t something they take lightly, and they don’t want to lose connections which are important to them. They know how to deal with people most of the time, and can make connections that last for a long time. When INFJs burn bridges this is something they do intentionally, and have put a lot of thought and consideration into it. When this happens it is referred to as the INFJ door slam, and happens because they know they need to remove a relationship which is toxic and bad for them. INFJs can sometimes have trouble with friends who don’t understand their introversion and their need to be alone often, and this can be something that might burn bridges without the INFJ wanting this to happen.

ENFJs try hard not to burn bridges, and they are often capable of doing so. They don’t want to do anything which might jeopardize their relationships and so they try to be good at making things right with just about everyone. ENFJs are also people pleasers, which certainly helps them to maintain their connections without upsetting or alienating anyone. When ENFJs do burn bridges this is almost always done intentionally, since they come to realize that this relationship is no longer healthy or something they want in their lives.

INFPs try not to burn bridges, but they do often possess strong opinions and inner morals. This can sometimes cause them to bum heads with certain people, and have trouble really making things right between them. INFPs are often okay with this though, especially if they are around people who they believe to be immoral or hard to trust. INFPs don’t need to feel connected with everyone they meet, they simply want to be sure to nurture the relationship which mean a lot to them. They can also burn bridges sometimes when people lack a sense of understanding towards their introversion and need to be on their own. Some people are incapable of realizing that this isn’t a person attack against them, and is simply part of who the INFP is.

ENFPs are friendly and charismatic people, which does often help them to maintain relationships fairly easily. They usually don’t like burning bridges or allowing things to go sour with people, especially with the ones they care for deeply. ENFPs do their best to remain close to their loved ones and want to be sure to maintain these connections to the best of their ability. ENFPs can however burn bridges with people simply because they have a tendency to bounce around and sometimes are a bit disorganized, and this can create tension and frustration with others.

INTJs do sometimes burn bridges, especially with people they no longer want in their lives. They aren’t afraid of breaking connections, and would rather have people around them who actually understand them well. For the INTJ losing connections isn’t that big of a deal most of the time, and they can move forward without become too upset by this. INTJs can sometimes burn bridges because they are stubborn people who aren’t always great at focusing on being sensitive to the feelings of others. This can be upsetting for some people, but often times the INTJ intentionally burns bridges with people.

ENTJs do burn bridges sometimes, mostly because they are such strong-willed and sometimes tactless people. They focus so much on being efficient and looking at the facts of a situation, that they can fail to be sensitive to the emotions of others. ENTJs don’t do this to be cruel, they simply aren’t good at dealing with emotions. ENTJs are good at maintaining relationship which truly matter to them though, and will do whatever they can to make things work. When the ENTJ burns bridges it is often because they don’t care much, or sometimes it is done intentionally.

INTPs try to avoid burning too many bridges, mostly because they realize that discord like this could cause trouble in the future. They don’t want to cause problems with people and would often rather make amends when things do go wrong. INTPs do sometimes struggle with understanding emotions though, and this can cause them to burn bridges on occasion. They also might have a tendency to become short-tempered, and when they become frustrated with someone they can burn that bridge as well. Most of the time INTPs simply try to keep the peace, while maintaining their independence and space.

ENTPs can sometimes seem scattered and have a tendency to jump from one thing to the next. This part of their personality can be endearing, but it can cause cause tension between them and others. Sometimes the ENTPs rebellious nature is what causes them to burn bridges, even when this is not their intention. ENTPs can also be stubborn people who enjoy getting into debates with others, and this definitely can lead to some frustration and potentially burn some bridges throughout their lives.

ISTJs try their best not to burn bridges, even with the people they don’t like all that much. For them it just isn’t wise to cause trouble with people, since this could hurt them or their loved ones down the line. ISTJs would rather keep the peace, and simply be cordial with people when they can. There are times when they recognize that someone is challenging them, and in these situations ISTJs aren’t afraid of intentionally burning bridges in order to keep this person out of their lives.

ESTJs can sometimes be tactless and crass people, and so this can cause them to burn bridges sometimes. This isn’t something they intend to do, but ESTJs don’t really like pretending or holding back. They aren’t naturally in tune with the emotions of others and so they just aren’t aware when they have said something that is harsh. ESTJs sometimes burn bridges because of their stubborn and strong natures, but they rarely become hung up on this fact too much. When they love someone the ESTJ will go out of their way to provide for them and nurture this relationship and for them that is all that matters.

ISFJs do their best to avoid burning any bridges, and truly dislike tension in this way. ISFJs want to make connections with others and work hard to keep a sense of peace in their environment. For ISFJs burning bridges often feels like they have failed in a relationship when things could have gone better. ISFJs are naturally people pleasers, and so they don’t want to burn any bridges or cause any trouble with anyone. There are times when they realize a person is toxic and in that case they might decide to shut them out.

ESFJs try not to burn bridges and are often capable of maintaining most relationships without trouble. They are people pleasers which definitely helps the ESFJ to refrain from burning any bridges or causing trouble with others. ESFJs don’t like to burn bridges and cause trouble with others, instead they want to keep the peace as best they can. If the ESFJ does burn a bridge here and there, it is often done intentionally when they realize that person is toxic and no good for them.

ISTPs do sometimes burn bridges, simply because they are so focused on living in the present. ISTPs aren’t afraid of making a few mistakes, nor are they afraid of saying what they mean. Sometimes their lack of understanding towards the emotions of others can cause the ISTP to appear a bit harsh, and this does create tension between them and other people. ISTPs don’t always intend to burn bridges, but they are good at mending these relationships if they desire this.

ESTPs do sometimes burn bridges, mostly because they become so caught up in the present moment and can exhibit reckless behavior sometimes. The ESTP might do or say something that upsets another person, but they can be a bit stubborn about this. They don’t always feel the need to make things right, and might allow these relationship to fall apart if they aren’t all that important to them. ESTPs also jump from one thing to the next rather quickly, and this can be upsetting for some people.

ISFPs do their best to maintain their relationships, but sometimes they become distracted by something new. They are often seen as friendly and kind people, which helps them to avoid burning bridges in most cases. Occasionally though, the ISFPs distracted nature can cause them to burn bridges with people who feel like they have moved on to something new and more exciting. Usually the ISFP can make this right, but there are some occasions where it just cannot work.

ESFPs are friendly people who often do their best to get along with everyone. They don’t like causing trouble with others and want to make people like them. For the ESFP though, sometimes their adventurous nature can be the exact thing which causes them to burn bridges. They constantly seek out new things and live their lives very much in the present. While the ESFP is off following their heart, they can say or do things which create trouble with other people. This trouble can cause the ESFP to burn bridges without really intending to do this.