Can You Handle Feeling a Bit Uncool, Based on Your Personality Type 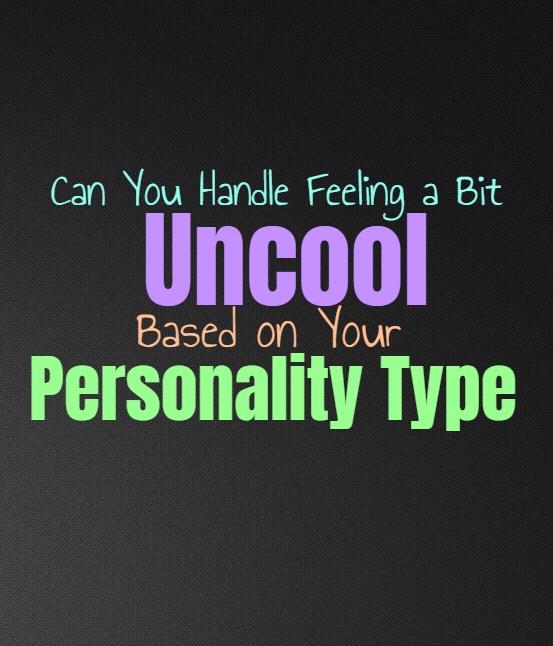 Can You Handle Feeling a Bit Uncool, Based on Your Personality Type

For some people the idea of being seen as uncool is definitely upsetting, for others it really doesn’t matter much at all. Some are much more inclined to be bothered by this idea, not wanting anyone to view them as uncool, or to see themselves this way. Here is how you handle feeling uncool, based on your personality type.

INFJs don’t like feeling uncool around people who they can sense are judging them. They especially don’t want to feel uncool when they are around people they care about, and want those people to see them a certain way. INFJs don’t care about being cool in a broader sense, but they do want to have qualities which are likeable and seen as impressive. They do their best not to let things get to them too much, since they don’t actually need to feel cool personally. INFJs just care about how their loved ones will view them and hope that they won’t be judging their uncool behaviors. They want people who enjoy their uncool or nerdy side, and take them as they are.

ENFJs can be bothered by the idea of being uncool, since they care about how others view them. For the ENFJ it can be embarrassing if their loved ones see this as a bad thing. Usually they can play off these “uncool” qualities as endearing and sweet, and so in these situations the ENFJ doesn’t mind it so much. If they do feel a sense of judgement they are likely to feel differently and might be a bit bothered by this label of being uncool. They do their best to overcome these situations because they want their loved ones to appreciate and admire them.

INFPs don’t really like to focus on being viewed as cool, since to them this can seem a bit like a foolish ideal. INFPs can often take on this idea of being “uncool” and turn it to their advantage. They often feel like this can be an endearing and even lovable quality and so it doesn’t bother them all that much. They can often take this label on as a positive thing and don’t really find it to be something bad or upsetting. For the INFP being cool isn’t measured by how the world often sees it, and they can find things appealing which most people see as uncool.

ENFPs don’t necessarily care about being seen as “cool” when they are older, but possibly when they are younger this can be an issue. When the ENFP is younger and hasn’t become more comfortable with themselves, they might find themselves searching for affirmations from others and so being uncool can seem like a negative thing for them. They don’t want others to judge them or see them as uncool, especially if they are trying to be seen differently. When the ENFP gets older though they often see being “uncool” as something they can turn to their advantage and be totally comfortable with.

INTJs don’t really care about being viewed as “cool” and rarely do they focus their energy on this. They do want to be someone that others respect, and don’t want to be seen as ignorant in any way. Being worried about being seen as “uncool” can seem like a waste of energy and really isn’t something most INTJs invest much time into. They don’t want their loved ones to see them negatively, but to them “uncool” isn’t always a bad things. They have certain values and they do want to uphold those, but rarely is being cool an important value to the INTJ especially as they become more mature and comfortable with themselves.

ENTJs do care about how their community and their loved ones view them, and so being “uncool” can be a bit of a negative thing for them. They don’t need to be seen as the coolest or most popular person but their image is something they value to some extent. They just want to be sure that their loved ones admire and respect them for who they are, and don’t view them in any sort of negative light. For the ENTJ being cool isn’t about how everyone sees them and isn’t about being popular, they just want the people close to them to see them positively.

INTPs don’t usually focus on being seen as cool or popular, since they try not to care much about those types of things. They keep to themselves and do their own things and so they try to avoid these types of labels entirely. If people see the INTP as “uncool” they just want to avoid those people, or maybe even make a joke out of the situation. For the INTP it is only important how their loved ones view them, as they want to be seen a certain way by these people who they are meant to trust.

ENTPs don’t really care about being viewed a certain way, but they often find ways to be seen as “cool” most of the time. They are outgoing and entertaining people who can usually turn a certain label to their advantage. If someone tries to peg them as “uncool” the ENTP is capable of twisting the situation and finding ways to appeal to those around them. They aren’t afraid of navigate these situations, since they enjoy the challenge and might even like being able to change people’s minds.

ISTJs don’t necessarily care about being seen as uncool, but to some extent it does matter. If this affects whether or not people take them seriously, then it can be a bother to the ISTJ. They want to be sure that people do take them seriously in the workplace, as well as their loved ones. They want to be seen a certain way by their community, as someone who is likable and reliable. For the ISTJ being a valued member of their community and family, is something that matters very much to them.

ISFJs definitely don’t want to be seen as “uncool” since they care deeply how their loved ones view them. If they are considered uncool this can be something which makes them less desirable or lovable in the eyes of those they care for. ISFJs don’t want to be someone that others feel embarassed by, and so being viewed as cool is important to some extent. For them it isn’t about how they feel internally, but for the ISFJ it is important that their loved ones see them in a positive light.

ESFJs don’t want to be viewed as “uncool” when they are younger, mostly because they want their loved ones to see them a certain way. If people think they are uncool then it can lead to the people they love seeing them this way as well. ESFJs simply want to please those closest to them and so their image is often reflective of this. When they get older this idea can be less of a big deal for the ESFJ, since they can find ways of making their “uncool” traits into something endearing and lovable.

ISTPs don’t often seem phased by the labels people attempt to place on them. Most of the time they prefer to keep to themselves and don’t really seem bothered if people call them “uncool”. Usually this aloof demeanor is the exact reason why ISTPs won’t be labeled this way though, since people often view them as mysterious and very cool. Ultimately most ISTPs don’t care much about this or how people see them, except for the special few people they care deeply for.

ESTPs actually don’t like the idea of being seen as “uncool” especially when it pertains to their loved ones. They want people to see them as likable and interesting, and being labelled as uncool can feel insulting. ESTPs are often adventurous and spontaneous people and these are the labels they prefer. If anyone sees them as uncool they might take to proving them wrong in hopes that this type of comment won’t stick to them.

ISFPs do often dislike the idea of being viewed as “uncool” especially by their loved ones. They care about how these people see them and don’t like the idea of being considered uncool. ISFPs don’t mind if they have awkward qualities which people notice about them, as long as they can be seen as endearing and sweet. For the ISFP being uncool can be something which bugs them because they do care how their loved ones see them.

ESFPs definitely don’t like the idea of being seen as “uncool” and they often do what they can to avoid this. Seeing as they are often popular and outgoing people, the ESFP does want people to consider them cool. They are often capable of maintaining this label, and are good at finding ways to make people like them even if they previously did not. Their charismatic and friendly natures often helps the ESFP to be someone that others see as cool and very popular.