Can You Cope with Things Being Left Unresolved, Based on Your Personality Type 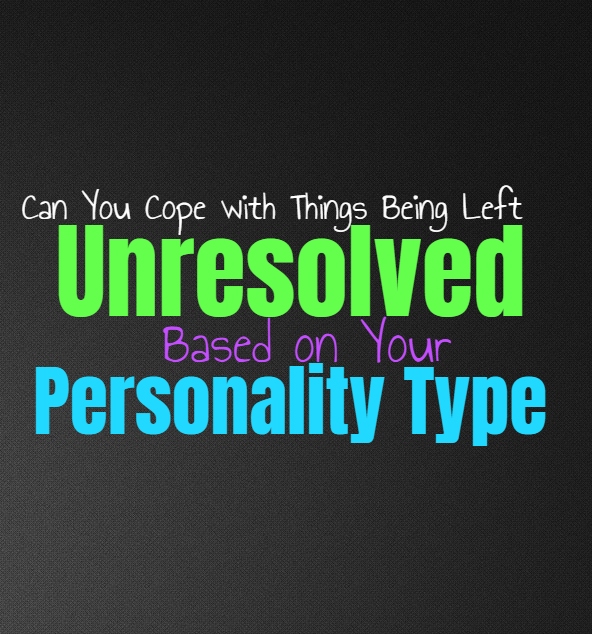 Can You Cope with Things Being Left Unresolved, Based on Your Personality Type

For some people any lack of closure or resolution is frustrating and these thoughts will likely hang over their head until the situation is mended. For others it isn’t that stressful to have loose ends, since they understand that not everything can be resolved. Here is how you handle having things unresolved, based on your personality type.

INFJs definitely don’t like things being unresolved, for them this can be very stressful. Whenever they don’t have all of the loose ends tied up, it leaves the INFJ feeling anxious. They likely have a hard time getting these thoughts out of their minds, constantly running it through their minds. INFJs have a hard time just ignoring these things and situations, especially when they feel like they have made a mistake which led to leaving things unresolved in this manner.

ENFJs don’t like leaving things unresolved, since they prefer to have more organizing in their lives. For the ENFJ it is stressful to have anything left up in the air, since closure is truly valuable for them. They want to be sure that they can keep up with the many responsibilities in their lives, and so resolving things is something they need to feel comforted. Without some sort of resolution the ENFJ will feel anxious and uneasy with the way things are going.

INFPs don’t necessarily enjoy when things are unresolved, but there are times when it can be stressful for them. They can overthink things and so if they have something which is bothering them because it has not been resolved, it can certainly be something the INFP struggles to remove from their thoughts. For the INFP it entirely depends on the situation and what they are struggling to find resolutions for. If it is something they care deeply about then they will struggle to let it go, but if it doesn’t feel very important they don’t mind the loose ends.

For the ENFP struggling with things being unresolved entirely depends on the specific situation. ENFPs can get over having some things unresolved, especially things they aren’t personally invested in. They understand that not everything can come to peaceful conclusions, especially things that aren’t all that important or within their control. When the ENFP deeply cares for something they might struggle with having a lack of closure, but usually they can get past this and do their best to find useful distractions.

INTJs don’t really handle having things unresolved by simply letting it slide, instead they want to find a way to fix this. For the INTJ having loose ends is both frustrating and unnerving and they are highly unlikely to just try and let go and move on. For them it is important to focus on finishing anything they have started, and in finding ways to obtain closure on the most important things in life. They do their best to problem solve when something is not being resolved properly, and they will do their best to mend this.

ENTJs don’t like leaving things unresolved, instead they believe in working hard to get things done. When they find that there are loose ends in any given situation, the ENTJ will work hard to problem solve and make sure this situation is fixed. ENTJs believe that closure is important, especially with things that they take on themselves to get done. When there are certain loose ends the ENTJ won’t simply move on and leave things this way, instead they will do what they need to in order to fix this.

INTPs don’t need everything to be resolved right away, but eventually they do need closure. They do have a tendency to start certain projects without needing to finish all of them quickly. INTPs can begin many different things and don’t really feel this need for instant closure. They do their best to find resolutions to the most important things in their lives, but not everything fits into this category. For some projects and things the INTP really doesn’t need closure, and might feel more comfortable without having things tied up.

ENTPs don’t need everything to be perfectly resolved in their lives, especially the things which are less important to them. They do often begin projects without being able to finish them right away, since their minds are easily distracted. ENTPs would rather feel more freedom in their lives and choices, and so having closure for everything isn’t necessarily their main goal. ENTPs do believe that certain things require resolutions, especially when it comes to relationships and ensuring that they have the right people in their lives.

ISTJs really don’t like leaving anything unresolved, since this can be a bit stressful for them. They believe in tieing up their loose ends and ensuring that everything is in order. ISTjs try their best to refrain from allowing anything to go left unresolved. They work hard to keep things organized and neat in their lives, and so closure is definitely important to them. When it comes to leaving things unresolved the ISTJ would much rather find a way to solve the problem and come to the resolution they need.

ESTJs really don’t like having anything left unresolved, for them this can actually be stressful. Whenever they have something on their mind which needs to be resolved, they will have a hard time letting go of this. ESTJs cannot simply move forward and pretend like everything is fine, instead they need to find a way to create some sort of closure. For the ESTJ it is important to find ways to resolve their issues and make sure that they reach some sort of closure.

ISFJs definitely don’t like having things unresolved and this can be rather stressful for them. They would prefer to work to find ways to make things right and create closure in any given situation. They likely cannot just ignore when something is left unresolved, instead they find themselves thinking about this situation inside of their minds constantly. ISFJs don’t like not having closure, especially when something is important to them.

For the ESFJ closure is deeply important and so having anything left unresolved is likely to leave them feeling deeply troubled. ESFJs want to do whatever they can to make things right, and likely cannot just ignore when something hasn’t been resolved yet. They might not be able to just ignore it and move on, instead they will think about it constantly until they can find some sort of resolution and truly solve the issues at hand.

ISTPs don’t obsess over things being unresolved, instead they prefer to move on with their lives. If something cannot be easily resolved, then the ISTP doesn’t want to let this stress them out unnecessarily. They will do what they can to problem solve and work through things, but they won’t find themselves obsessing over this. ISTPs prefer to focus on living in the moment and don’t want to allow stress to hold them back.

For ISFPs it is best to focus on the present moment, and so they don’t like obsessing when things are not resolved as they would hope. ISFPs are okay with things being unresolved, especially when it isn’t something which seems vital to them. They prefer to focus on the moment and so they can let go of things and move forward the best they can.

ESFPs don’t really need everything in their lives to be resolved, instead they prefer to let some things go. They live in the present moment and enjoy soaking up everything they can from the world around them. For the ESFP it is draining to be stuck obsessing over something, especially when it comes something simply not being resolved the way they would hope/