Are You Good at Making Appointments, Based on Your Personality Type 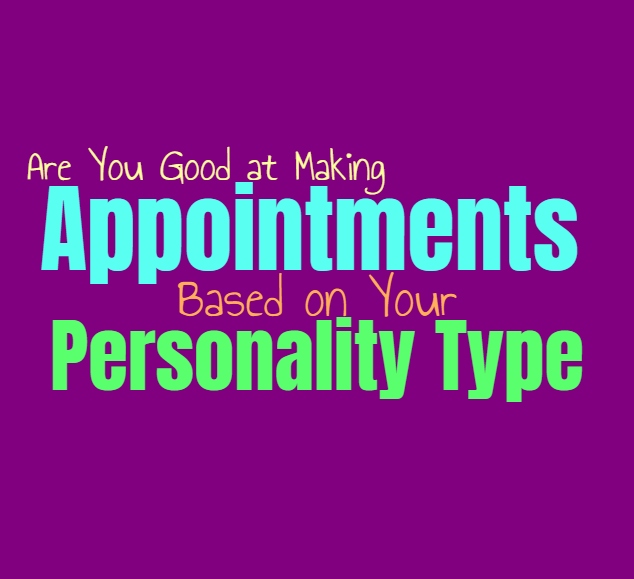 Are You Good at Making Appointments, Based on Your Personality Type

Most people complain about having to make phone calls in order to set appointments, often for things which they must do but really don’t want to do. Sometimes this means scheduling doctors appointments, or just meeting with someone pertaining to work. Whatever the appointment is, making these phone calls is often a monotonous and sometimes draining task. Here is how you handle making appointments, based on your personality type.

INFJs usually despise things like having to make appointments, especially when it forces them to make boring and shallow conversation with someone over the phone. They especially won’t enjoy having to make appointments for things they really don’t want to do. INFJs can certainly procrastinate with the best of them, and when it comes to making appointments they are likely to hesitate with executing them. INFJs do better if they have someone to motivate them to make these phone calls, since most of the time they just don’t really feel inspired to do it.

ENFJs might not enjoy making appointments, but they can often find the motivation to get it done. They are the type of people who work hard to keep everything juggling in their lives, and so they do their best to keep up with their tasks and errands. To the ENFJ making appointments is just another things on their list of tasks they need to get done, and so they don’t want to put it off for too long. They might hesitate with the appointments they don’t actually want to go to, but they try not to let things pile up for too long.

INFPs don’t enjoy making appointments and especially don’t enjoy feeling forced to make phone calls. For them it can feel draining to have to make an appointment for a specific day, and then be sure to actually arrive on time. INFPs don’t really like living based on a strict schedule and so this often feels really draining for them. INFPs would often rather focus on doing their own things, and can be masters at the art of procrastination. When they don’t want to make a specific appointment, they can often push this back for a long time.

ENFPs aren’t always the most organized people, and so feeling obligated to make appointments can be draining for them. They also don’t like the idea of having to schedule something ahead of time, and be sure to show up when they are supposed to. For the ENFP finding the motivation to do the more boring things in life, can be somewhat difficult. They might procrastinate making appointments for just about as long as they can, finding themselves putting off doctor or dentist visits until they are forced to actually go.

INTJs often try to maintain their important appointments and don’t like falling behind on things. If the INTJ knows that making certain appointments are important, then they won’t simply put it off. They aren’t fans of procrastinating when they know something is important, especially when it comes to schedule appointments which will make a difference in their lives and futures. INTJs might not enjoy making the phone calls needed in order to make appointments, but they do their best to overcome their discomfort.

ENTJs don’t mind making appointments most of the time, especially since they are outgoing people. For them the less important appointments can get put off for a while, especially if they have other things on their mind. For the ENTJ it isn’t about having to deal with people though, since they are rather outgoing by nature. For them it is easy to schedule the appointment and figure out a good time when they should make it for. ENTJs just find themselves focused on things they find more important sometimes, especially if they are having to make an appointment for something which seems silly.

INTPs often detest having to make appointments, especially when they are forced to make small talk while doing it. INTPs can procrastinate scheduling appointments for a rather long time, constantly find something else to do instead. They also find themselves easily distracted and don’t like feeling forced to perform these boring tasks. INTPs will often put off making certain appointments until the very last minute, sometimes even a few minutes after that.

ENTPs really don’t like having to make appointments for things, especially the appointments they won’t want to show up for. For the ENTP these sort of mundane tasks can be draining, and they don’t like having to schedule ahead of time for something which they are going to be obligated to show up for. ENTPs would often rather procrastinate these things until the last minute, and they are fairly good at that. For the ENTP feeling obligated to do these things is just draining and rather boring.

ISTJs are great at making their appointments, as well as arriving on time. They are often very organized people who like to keep up to date on important things. They know how to schedule things and maintain an awareness of their schedule as well. For the ISTJ making appointments is one of those smaller tasks which brings them a sense of accomplishment. When they can check all of these things off of their list it leaves them feeling a bit more relieved and like they have less pressure on them.

ESTJs are very organized and capable people, who believe in getting things done. Making appointments is often simple for the ESTJ, and just another part of their list of errands they need to complete. They don’t like procrastinating these tasks, since this only causes things the pile up and this creates a lot of stress for the ESTJ. They work hard to get things done and making appointments is just another things they believe in staying on top of.

ISFJs are often good at making appointments, and might even be the designated person to do this for their family members. They like take on a lot of tasks which should belong to others, since they want to be able to take care of and provide for their family. ISFJs will be the ones schedule the appointments and making these seemingly boring phone calls. For them it is just another important part of taking care of everyone around them, and ensuring that things get done properly.

ISTPs often hate making appointments, especially for things they don’t want to actually go to. ISTPs really don’t like mundane tasks and find themselves wanting to avoid them entirely. They also don’t like having to maintain a certain schedule and making appointments only restricts them further. ISTPs might procrastinate making certain appointments for as long as they possibly can, leaving it to the last minute.

ESTPs really don’t like making appointments unless it is for something they deem important. They have a tendency to procrastinate things, especially tasks which feel a bit boring or mundane. ESTPs prefer to focus on the present and so scheduling future appointments can be a bit draining for them. Having to make appointments for things they don’t want to do, is likely something the ESTP will leave until the very last minute if they can.

ISFPs often hate making appointments and might fail to even do this. They have a hard time feeling obligated to schedule appointments, especially for things they don’t want to participate in. ISFPs have a tendency to procrastinate with things they don’t enjoy, and will leave it until the very last minute. They might even avoid making these appointments entirely, which can lead to them getting themselves into some not so pleasant situations.