ESTJ Weaknesses, Flaws and Shortcomings: Where the ESTJ Feel Challenged 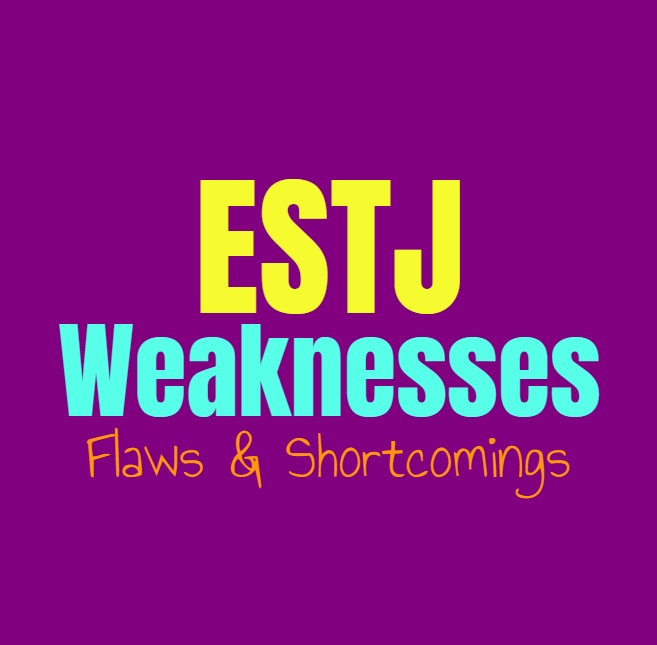 ESTJ Weaknesses, Flaws and Shortcomings: Where the ESTJ Feel Challenged

ESTJs certainly have a lot of strengths which help them to accomplish their goals, but just like everyone there are certain areas which they could improve. ESTJs are always wanting to be better at things, not liking to see weaknesses in themselves. Accepting that they might have shortcomings can be a challenge for them, as they want to be someone who others see as highly capable of just about anything they set their minds to. ESTJs are very goal-oriented people and are certainly capable of making things happen, but they do have certain areas where they will struggle. This can certainly be frustrating for the ESTJ to accept, but in most cases this is related to things like emotions and so it can be more natural for them to push aside those shortcomings.

ESTJs are perfectionists, which can be both good and bad at times. While this is what drives the ESTJ to always improve and become the best at what they do, it can sometimes push them and others too hard. They can be rather hard on themselves if they don’t feel like they have accomplished something with a sense of efficiency and near perfection. If things are not done to their standards they can become a bit intense towards themselves and towards others. When ESTJs are dealing with people who are not efficient and seem to constantly make mistakes, they can appear aggressive over this. They value others with a strong work ethic, and people who are capable of getting things done. ESTJs need things to be done with a sense of focus and perfection, or they can become stressed and frustrated. They are often harder on themselves than anyone else, never feeling like things are good enough for their own high standards. This desire to make everything perfect definitely puts the ESTJ in highly stressed out moods, and can be a bit overwhelming for them at times. It is important for them to learn to take a step back once in a while, and give themselves credit for their accomplishments rather than always seeing the ways they could improve.

For the ESTJ dealing with their own emotions as well as the emotions of others can be truly difficult. They prefer to focus on facts and practical things, rather than inner feelings. Having to take time to process their emotions and sift through them, can become rather exhausting for the ESTJ. They would rather look at things from a logical perspective, valuing practicality over feelings. This can become a struggle when they have to deal with other people in crisis or people who are in an emotional state of mind. The ESTJ might be a bit too direct with those people, not knowing how to be sensitive to their feelings. When they care for someone the ESTJ wants to find a way to solve their problems when they are upset, rather than trying to focus on the feelings they are going through. They prefer tangible ways of expressing that they care for someone, rather than having to express feelings in a verbal way.

They Can Be Stubborn

ESTJs can be extremely stubborn, especially once they have set their minds to something. They are very difficult to convince and can be rather unmovable when they are stuck on a goal or belief. ESTJs don’t really change their inner beliefs that easily, instead they can be a bit intense about sticking to the things they feel are right and true. This can be difficult at times, since ESTJs aren’t always the most open-minded people when it comes to new ideas they need to explore. Instead it takes a lot of time and convincing for the ESTJ to open themselves up to being convinced of a different point of view. Instead they prefer to remain firm when it comes to their beliefs or their goals, not wanting to be someone who is flighty or wavers simply because someone tells them to. While this can be a good thing and makes the ESTJ highly loyal and sure of what they want, it can also be a weakness in certain situations.

ESTJs are not fans of change and can struggle to accept when things are different from the norm. They can become focused on their traditions and the things which they are used to. They prefer to stick to these patterns and their usual routines, not enjoying when things become too different. When the ESTJ sees that a change needs to be made in order to increase efficiency, they are definitely capable of handling this. But for them it is about making that choice themselves and finding the best ways to transition into the changes. When the ESTJ is forced into change it can be truly unnerving for them, as they prefer to maintain a routine. They want things to be done a certain way and care about efficiency. Change can shake things up and the ESTJ doesn’t like not having time to adjust to this so that they can ensure that things go smoothly. This is why change can be such a challenge for them, as they want to be prepared for everything so that they don’t make mistakes along the way.