Do You Find Nerdy Behavior Attractive, Based on Your Personality Type 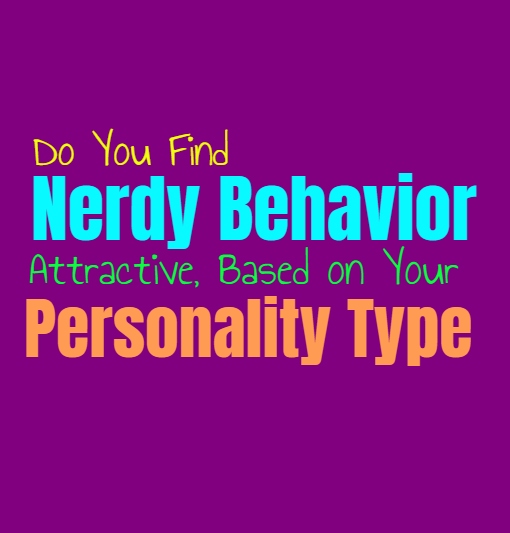 Do You Find Nerdy Behavior Attractive, Based on Your Personality Type

Some people are drawn to the nerdier side of life, and find people with some nerdy qualities to be truly attractive. For them it can be that this person is deeply intelligent and spends hours reading, loves history, loves gaming, or really just anything that might be considered nerdy by most people. This can be a really attractive quality for some people, and this can sometimes depend on their personality type.

INFJs do often find themselves drawn to some nerdy qualities, since they have a nerd side themselves. INFJs are interested in things which might not be all that “cool” to some people, since they are drawn to whatever inspires them most. INFJs do like people who possess an interest in nerdy subjects, but they often find this attractive when it is paired with strength and confidence. INFJs are wildly attracted to people who are comfortable enough with who they are, to remain confident even in their nerdiness.

ENFJs do find that they are attracted to many different qualities, and sometimes nerdy behavior is truly endearing to them. Someone who possesses a coolness but is also interested in nerdy things, is certainly going to be attractive to the ENFJ. They often find these little things to be rather appealing, especially if this person also has a confident side to them. ENFJs might not be attracted to someone who is completely nerdy and incapable of breaking away from this though, for them it is best when these qualities are combined with other things.

INFPs can certainly find nerdiness attractive, especially with people who are highly intelligent. INFPs are drawn to the mind and heart of a person, and so if someone enjoys subjects which seem nerdy it can actually be rather appealing.They enjoy unique qualities in people and don’t just find themselves attracted to someone because they are popular or charming. INFPs can certainly be interested in people who can be a bit nerdy, especially since they find themselves interested in a lot of nerdier subjects.

ENFPs might not outwardly admit their personal interest in nerdy things and people, but they certainly find themselves drawn to it. ENFPs find some nerdy behavior to be rather endearing, especially when it comes from someone they already find themselves interested in. ENFPs often find themselves deeply attracted to people who have unique minds and who are willing to explore different sides of themselves. ENFPs are drawn to intelligence, but are also attracted to nerdiness in certain people.

INTJs are often attracted to people who they can connect with, and who have unique and intelligent minds. For the INTJ certain nerdy behavior is definitely appealing, especially when it comes from a sincere place. People are interested in learning and reading can often be considered nerdy to others, but to the INTJ this simply shows someone who is intelligent and shares a hunger for learning. They also find people who are unique to be truly attractive, and sometimes this is connected to interests in things that seem odd or nerdy to others.

ENTJs can sometimes be drawn to people who are confident on the outside, but do possess some nerdy qualities. For them it is more about the individual person, and their sense of strength and ambition. ENTJs are very attracted to people who can handle themselves in most situations and who don’t always look to others for help. For the ENTJ nerdy qualities are not bad at all, it simply depends on the person who possesses them and what others value they bring to the relationship.

INTPs are often attracted to many different qualities, and a bit of nerdiness can certainly be endearing. They often find themselves interested in things that seem a bit nerdy to others, and so they want to find someone they can connect with in this way. If someone possesses an interested in similar subjects and is capable of keeping up with the INTP, they will find this very attractive. INTPs will be even more attracted to someone who possess both nerdy and “cool” behaviors, someone who is confident in themselves and their nerdy habits.

ENTPs are often attracted to people who can surprise them, and so there are many different qualities and behaviors which intrigue the ENTP. Someone who constantly keeps them on their toes and isn’t at all boring, is definitely going to keep the ENTPs attention. There are plenty of reasons why nerdy behavior can be appealing to the ENTP, it entirely depends on the person and how they hold themselves. If this person is interested in nerdy things but is confident in themselves otherwise, it can be deeply intriguing for the ENTP.

ISTJs don’t really find themselves deterred from someone being interested in nerdy things, especially if the subjects are intelligent and unique. ISTJs simply find themselves drawn to someone who they can see themselves really creating a future with. For them there are many attractive qualities which someone can possess, but ISTJs are more drawn to confidence and skill. If someone is capable of being themselves without fear of how others will react, then the ISTJ will find their nerdy interests very endearing.

ESTJs are attracted to people who are strong and ambitious, and so whether or not they possess nerdy traits doesn’t often matter much. ESTJs go after what they want and they are attracted to people who do the same. If someone can be a bit nerdy this isn’t going to deter the ESTJ, especially if that person also possesses a confidence and inner strength. For them nerdiness isn’t necessarily attractive on its own, instead it is something they find endearing in people who possess other attractive qualities.

ISFJs are often drawn to someone for their spirit, not just their qualities. They find themselves attracted to people who are stable and dependable, and so if they possess nerdy behavior this can be rather endearing to them. When the ISFJ cares deeply for someone then most of their unique traits become attractive to them, even the things which appear nerdy to others will be lovable for the ISFJ.

ESFJs do often find nerdy behavior to be completely endearing, especially in someone they are already attracted to. ESFJs do enjoy being around people who possess unique qualities, and who aren’t just the typical popular and cool person. They might not be drawn to someone just because they have some nerdy qualities, instead these are the things the ESFJ finds more attractive when they have already developed feelings for someone.

ISTPs don’t really find themselves drawn to nerdy behavior, but they are not deterred by it either. ISTPs are drawn to people who have a sense of adventure and a passionate spirit. They are often more intrigued by confidence and if someone is interested in nerdy things the ISTP simply wants them to be proud of this. Someone who expresses themselves without reservation or fear of judgment, is often very intriguing to the ISTP.

ESTPs are not simply attracted to nerdy behavior, instead it is something which becomes endearing when they already have feelings for someone. They are drawn to someone’s spirit and often find themselves more intrigued as they uncover their quirky qualities. ESTPs want to be around someone who keeps them interested and always on their toes, or else they become bored by them regardless of their other qualities.

ISFPs do find some nerdy qualities to be attractive, but they often find themselves drawn to people who seem a bit odd to others. They want to be around people who have unique spirits and aren’t afraid of being themselves. For the ISFP mystery is definitely attractive in a person, and a bit of nerdy behavior can certainly be appealing with the right person. If this person is also rather attractive to them physically, the ISFP often likes when they possess nerdy qualities.

ESFPs aren’t necessarily drawn to nerdy qualities, but that doesn’t mean they find them unattractive. ESFPs are drawn to people who inspire them and often find confidence more attractive. They are interested in people who are confident in themselves and unafraid to take a few risks. ESFPs don’t like being bored or confined and so they find it more appealing when someone is willing to give them space when need be.