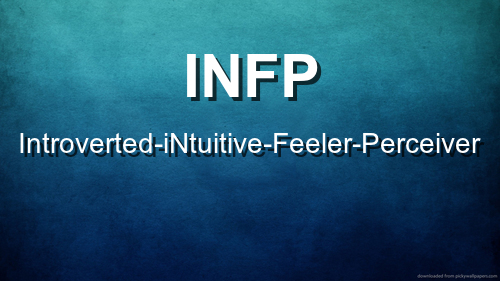 The first function of the INFP is Introverted Feeling, which is basically their internal sense of how they feel about things and what they believe is right or wrong. It is like a moral compass that guides them and most of their decisions. It is also introverted so it’s not as easily expressed outwardly. Other people might not see it as much as the INFP feels it. Introverted Feeling deals with right and wrong. Most things an INFP experiences are usually sorted into these categories. INFPs are drawn toward people, causes, and things that they identify with. Similarly, they tend to want to avoid what they don’t want to be a part of.

Their second function is Extraverted Intuition, or Ne, which involves understanding the outside world and seeing possibilities. Ne can interpret the world from multiple perspectives. The function allows the INFP to get in other people’s shoes and see where they are coming from. This can help them to be less judgmental of other and really grasp how different other’s lifestyles are. Extraverted Intuition is what INFPs used to take in information externally. This function also gives them like offbeat sense of humor. They see the world from a different perspective than most people, which can lead to some witty connections.

An INFP develops this third function of Introverted Sensing, or Si, a bit later in life. Introverted Sensing wants the world to have a routine and a predictable set of outcomes. Si is great at remembering facts and details. INFPs that have developed their Si may become very good at routine tasks or identify very strongly with traditions and old friends. This Si can create a sense of nostalgia in the INFP. Their Extraverted Intuition and Introverted Sensing may clash in a way that the INFP wants everything to change and stay the same.

Next is Extraverted Thinking, or Te, which is something that the INFP isn’t exactly strong at but it can be developed later in life. It involves wanting to organize the external environment outside of themselves.

This can show up a lot in their work settings by either managing people or having a task that they need to get done. Extraverted Thinking deals with developing a step-by-step logical process of how things can be done. An INFP in a work environment may embrace this function and look more like an ESTJ. Te is one of the most used functions in most work settings, so the INFP may have an almost chameleon-like attitude at work that helps them to get done what needs to be taken care of.

A strength of an INFP is that they are loyal and devoted. They’re very close to their friends and family and they will stand by them and back them up through pretty much anything that they go through.

They tend to be fun and playful as well. They can be good at making light situations and not taking stuff too serious. However, on the other hand, there are periods that they go it through when they can be very intense and serious about their feelings and convictions.

They are also very good at building others up, encouraging them, and making them feel good about themselves, which just comes naturally to the INFP. And they have a strong desire to fill their idealism of where they want things to go and what they believe is the best way that things should be played out.

One weakness of an INFP is that they can react pretty emotionally. They could get caught up in the moment and not be able to separate their feelings from a more objective viewpoint. If their feelings are hurt they may just react very emotionally at first and this could confuse some other people that might not understand that. INFPs that develop their Extraverted Intuition may realize they are taking the situation out of context.

They can also have an extreme dislike of criticism. Any type obviously does not particularly enjoy criticism, but INFPs could have a tendency to take it more personally than some others.  They may see someone’s comment as a personal attack on them when the other person may be just trying to suggest a way to help.

The INFP may also have a tendency to blame themselves for situations that go wrong, thinking it is because of something they did.

The INFPs idealism, while usually a strength, can cause some problems. They often avoid conflict. This could cause some problems with someone who is very direct and expects a straight answer. The INFP, being more of a peace-keeper type, might avoid causing an argument instead of saying how they feel. And while this is a good trait, it could also cause problems because it isn’t healthy to bottle up all these emotions all the time. This could really stress the INFP out.

Speaking of stress, when an INFP is under stress, they have a tendency to want to withdraw from the situation and go back into their Introverted Feeling mode which is their strength.  This could cause them to shut out the external world which can cause some conflicts with the other people.

Another problem that could cause a lot of stress for INFPs is when they are split between their code of ethics and relationships with others. They are by nature people pleasers, but at the same time they have strong convictions that they believe in. So, when those two desires start pulling away from each other, it can cause them to feel very disconnected from who they are and their own self-identity.  INFPs want to stay true to who they are but they also want to be accommodating.

INFPs may tend to communicate indirectly and abstractly. They might be indirect about what they are saying and have more of a symbolic interpretation of other people’s thoughts and feelings. And this could cause problems with the people that are more direct and more want a straight answer. The INFP might beat around the bush a bit and which cause some communication issues with other people looking for a more direct form of communication.

Check out these 10 Signs You’re Undoubtedly An INFP!

I have a couple free reports on how an INFP can grow, as well as careers that are perfect for the INFP.

To get these free reports, just enter your email below, check your inbox, and click the confirmation link inside. Then you will receive both free reports.