Does Guessing Annoy You, Based on Your Personality Type 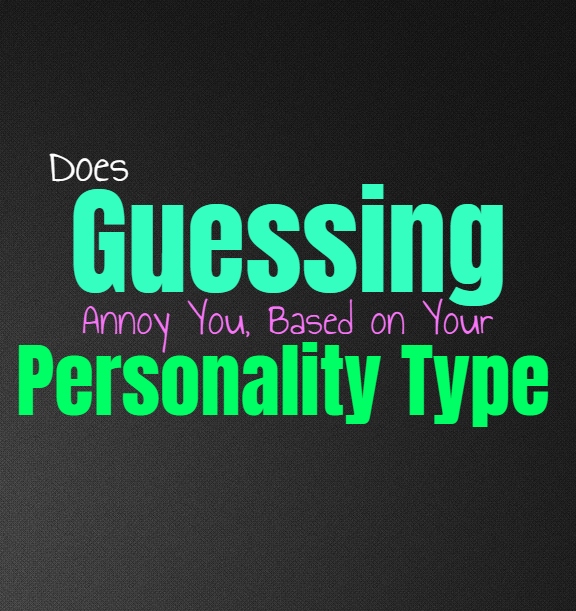 Does Guessing Annoy You, Based on Your Personality Type

For some people having to guess in order to find the answers they seek, can be rather frustrating. When someone forces them to make guesses or they simply don’t have enough information to do anymore, it can be annoying for them. For others it isn’t that big of a deal and can actually be exciting to be unaware of what the answer actually is. Here is how you feel about guessing, based on your personality type.

INFJs definitely get annoyed when they are made to continuously guess about things. They don’t like having to leave things up to guessing, since they prefer to be sure about their choices beforehand. For the INFJ having someone try and force them to make guesses when they aren’t sure, can be extremely annoying. They do often use their intuition as a means of uncovering the truth and so this does help them make a much more educated guess or assumption. There are instances where there just isn’t enough information and so the INFJ becomes annoyed with feeling as if they need to make guesses.

ENFJs aren’t fans of guessing and prefer to be completely aware of what is to come. They want to be able to make decisions with a sense of knowledge and awareness. For the ENFJ feeling like someone is forcing them to simply guess, is both annoying and feels a bit pushy. They need to be sure of things and want to have as much information in front of them as possible before they decide to take their next steps forward. For the ENFJ knowing the path before them is the most comforting thing, and so the unknown is a bit unnerving for them.

INFPs might enjoy making guesses about things, and like to be able to use their imagination in this way. Looking at the information they have and trying their best to uncover the possibilities, is actually sometimes more exciting than knowing for sure. When the answer is not clear it gives the INFP freedom to explore the options and what it might be. This time where their imagination and creativity can run wild can be truly exciting and entertaining for the INFP.

ENFPs really hate stagnancy and the mundane, and so things being always clear and known can be more exhausting than the unknown. For the ENFP sometimes guessing can be exciting and fun, since it gives them a chance to use their imagination. Having this time to really consider all of the options and various possibilities without having a clear answer in front of them, is something that can be rather exciting and rewarding for the imaginative ENFP.

INTJs really don’t like being made to guess, instead they prefer to know for sure. They don’t like simply guessing and trying to observe the many potential answers, instead they believe in figuring out the truth in a precise manner before moving forward. When the INTJ feels forced to continue guessing about something they can become frustrated and deeply annoyed with the person forcing this upon them. They don’t like making choices without knowing the answers before them, and so guessing is not their favorite thing.

ENTJs really aren’t fans of having to guess since they prefer to be sure about things before moving forward. For the ENTJ having enough knowledge to make their choices in life is truly important. Feeling like they have to make guesses about things is going t leave the ENTJ feeling frustrated and uneasy. They don’t believe in simply guessing especially when they are making an important decision. Having someone try and force them to make guesses about something, is also rather annoying for the ENTJ.

INTPs don’t mind guessing with some things, since they enjoy the chance to explore the many options and possibilities available to them. They have truly rich inner minds which are filled with imagination and complex thoughts and ideas. For the INTP being able to explore the different possible outcomes can be exciting and rewarding, and gives them a chance to use their skills to uncover what the truth most likely is. For them it is more about using the small pieces of information they have in order to make a much more educated assumption, rather than just a guess.

ENTPs don’t need every piece of information in order to be able to make assumptions about something. For them guessing can be enjoyable since it gives them a chance to explore their options and really expand their minds. ENTPs have rich imaginations and can often come up with many different possible outcomes of a situation. For them it can be deeply rewarding to make these guesses in hopes of figuring out what the right path most likely is.

ISTJs really don’t like feeling like they have to guess, and prefer to be prepared for every situation. For the ISTJ it is much more rewarding and comforting to know what lies ahead, and to have the accurate information in front of them. Feeling like they need to guess about something means they don’t have the information they truly require in order to move forward. For the ISTJ guessing really isn’t something they are happy about and so they try to avoid this whenever they can.

ESTJs really don’t enjoy guessing and often feel like this lack efficiency and focus. When they are in a situation in which they are forced to guess it can be extremely stressful for them. ESTJs believe in making educated choices, and don’t like taking chances which could lead to making mistakes. For the ESTJ having to guess is very annoying and extremely frustrating. They much better having the choices clear to them and want to be able to know they are following the correct path.

ISFJs are definitely not fans of guessing, and can even become annoyed when this is just a game. They don’t like putting themselves in situations where they have to make a guess, instead they want to be sure before moving forward. ISFJs prefer to have the answers made clear for them, so that they know they are making the smartest choices. ISFJs don’t want to walk into the unknown, instead they believe in doing what they can to be completely aware of what is to come.

ESFJs really don’t enjoy guessing, since sometimes it leaves them feeling foolish. They believe in making choices based on knowledge and prefer to be sure about the future. ESFJs know that having to guess about things means they could fail and for them this would be deeply upsetting. They want to be able to get things right for their loved ones and so guessing can be rather stressful for the ESFJ.

ISTPs don’t mind guessing since it can bring a little excitement to their lives. What they do dislike is being stuck in a bored and stagnant situation. If they have to guess about something it can be a bit more thrilling than being completely sure what the outcomes is. ISTPs also enjoy using their minds to problem solve and figure out what the most likely choice is.

ESTPs don’t mind guessing about some things, especially since it can be exciting sometimes. They enjoy being able to walk into something which is a bit unknown, and don’t like feeling trapped in some stagnant path, ESTPs like having things shaken up a bit and so having to make guesses can be a bit more thrilling for them.

ISFPs really don’t mind guessing about things, since it can be exciting than being sure. Having all of the answers clearly laid out in front of them can feel a bit draining and monotonous. ISFPs enjoy experiencing new things and want their lives to be filled with passion and excitement. For them it is more fulfilling to walk into something which is unknown to them, rather than have all of the answers ahead of time.

ESFPs don’t mind making guesses, as the challenge can be a bit thrilling for them. Feeling stuck in the same stagnant position can be draining for the ESFP and so sometimes they need things to be shaken up a bit. Having the chance to make guesses about what the future might hold, can be more exciting and fulfilling for their inner imagination.