Do You Challenge Authority Often, Based on Your Personality Type 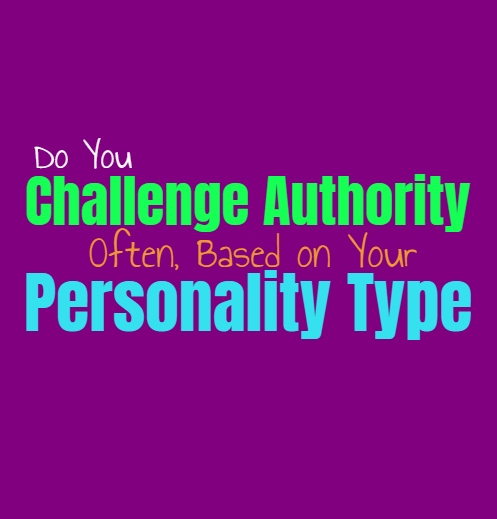 Do You Challenge Authority Often, Based on Your Personality Type

Some people believe in challenging authority and finding ways to make their own rules in life, while others prefer to follow the leader and do what is expected of them. Both paths certainly serve a purpose in the grand scheme of things, but for some it just feels like the right thing to challenge authority and make their own decisions. Here is how likely you are to challenge authority, based on your personality type.

INFJs do have a tendency to challenge authority, at least in an analytical sense. They prefer to consider whether or not the people in control deserve this position, and if they have their followers best interests at heart. INFJs often realize that most people in power will be corrupted by this, and might not deserve to be in their position. They are willing to challenge this authority, and often struggle to completely fall into line. At the same time INFJs don’t like being someone who constantly breaks rules or disobeys the expectations of their loved ones, so they search for some kind of balance.

ENFJs don’t believe in being someone who causes too much trouble, but at the same time they are passionate and strong-willed people. They often analyze the situation and are willing to mentally challenge authority and consider whether or not they should be following them. ENFJs don’t just accept things as they are, instead they believe in looking at the different angles. They use their intuition to decide whether or not they can truly trust someone, and if they deem someone worthy. If the ENFJ realizes that a person does not follow the right moral path, they are certainly likely to challenge their authority.

INFPs are willing to challenge authority in the right circumstances, especially someone who appears as immoral to them. If a person in a position of authority is rude and uncaring, it becomes difficult for the INFP to follow them without needing to often challenge their sense of power. For the INFP it is about following their own rules and path, and only listening to people who they can truly trust and rely on as morally sound.

ENFPs definitely believe in challenging authority, since they want to follow their own rules and path in life. If someone tries to control the ENFP it often makes them want to challenge this and fight against it. They don’t mind when someone else is in a position of authority, they simply want to be sure they are not taking advantage of this. They don’t like blindly following anything, instead the ENFP believes in analyzing, as well as following their intuition.

INTJs don’t mind following someone who is in a position of authority, for them it is about being logical. They will respect authority and rules, if those rules make sense and prove to make society more efficient. INTJs just don’t want to follow anyone who they consider to be foolish or ignorant, and will be willing to challenge them if this is the case. INTJs want to be sure they are being wise before challenging authority, and make these decisions after a lot of consideration.

ENTJs often prefer to be the person in the authority position, since they aren’t fans of having to follow others. They are natural leaders who want to be the ones setting the rules and making the decisions. They are willing to follow the rules and go with what the person in authority suggests, but only if it is the smart and efficient choice. ENTJs are not afraid of challenging authority, but they don’t do this for no reason at all.

INTPs do naturally challenge authority, since they don’t like feeling obligated to follow the rules. INTPs often feel it is their duty to challenge authority, in order to figure out if someone is doing things the wrong way. They aren’t rule followers by nature and prefer to go against what is expected of them. For the INTP this is the best way to learn and really uncover the truth in any given situation. They would rather explore the different possibilities, which sometimes makes them want to challenge authority.

ENTPs are not rule followers by nature and so they do actually enjoy challenging authority. They believe in going against what people expect in order to really learn and uncover different possible outcomes. ENTPs will certainly challenge authority, especially if they feel like the person in power needs to be challenged a bit. For the ENTP this is about uncovering the truth and learning more about people and situations.

ISTJs don’t like challenging authority most of the time, since they prefer to follow the rules rather than shake things up. This doesn’t mean they will blindly follow someone who is immoral, but they prefer to find people they can respect and follow. ISTJs simply believe in focusing on getting things done, and don’t like to get caught up in challenging authority and breaking the rules which prove to help them be more efficient.

ESTJs aren’t naturally likely to challenge authority, since they prefer to follow the rules. ESTJs want to be seen as a valued member of their community and so they don’t want to shake things up and cause trouble. ESTJs are capable of being in positions of authority themselves, and do generally prefer to be the leader. They are good at filling this role, and so instead of challenging authority they want to work towards becoming one themselves.

ISFJs don’t usually challenge authority, instead they prefer to follow the rules and keep focused on what is important to them. ISFJs care about providing for their loved ones and so they don’t like doing anything which might get in the way of this. For the ISFJ challenging authority seems like a messy thing to do, which could cause them to shake things up in a negative manner. They would much rather follow the rules so that they can work towards a good future for their loved ones.

ESFJs don’t challenge authority for no reason, but this doesn’t mean they don’t do this occasionally. For the ESFJ it depends on what the authority is presenting to them, and if it goes against their beliefs and what they have grown accustomed to. When the ESFJ is raised with certain beliefs they don’t enjoy when authority tries to defy this or make them change their minds, and so in these situations they actually will challenge authority and have a hard time to really following.

ISTPs don’t mind challenging authority, and sometimes they do this naturally without even thinking about it. For the ISTP it is best to follow their own path and so they don’t like being told what to do. If they feel inspired to go in a certain direction, it becomes difficult for them to listen to some authority telling them they can’t.

ISFPs are certainly willing to challenge authority, since they find it hard to follow what other people expect of them. They often dance to the beat of their own drum, making it difficult to simply fall into line. ISFPs will challenge authority, or in some cases completely ignored it and go about living life on their own terms.

ESFPs really aren’t afraid of challenging authority and often know how to go about this in the right way. They believe in following their own path in life and don’t like doing what people command of them. If the ESFP wants to explore a different option then they belief in doing this freely without really feeling restrained by others. They are willing to challenge authority when they know it is the right choice for them, and are not afraid of this.