Just How Retro You Can Be, Based on Your Personality Type 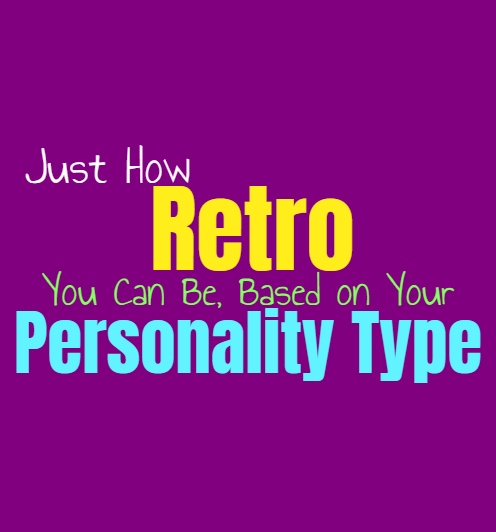 Just How Retro You Can Be, Based on Your Personality Type

For some people the idea of being retro seems like a negative thing, and appears like you are out of date. For others this just means they don’t subscribe to trends and prefer to create their own, or resort to older styles which are still within their souls. Here is how retro you are likely to be, based on your personality type.

INFJs are often a bit more on the retro side since they don’t like following trends simply because others tell them they should. INFJs prefer to focus on things which inspire them and sometimes this means drawing from the past. They are capable of moving forward and keeping up with newer styles, they just prefer to stick with the things which excite them personally. INFJs usually don’t follow trends for the sake of being like others, instead they want to go with what feels right for them and this does often mean being a bit more retro.

ENFJs do sometimes have a retro side, but they prefer to make this stylish and still relatable to others. ENFJs are aware of how people feel about them, and they do sometimes find themselves caring about this. They don’t want to be judged by others because they want to be someone who their loved ones can be proud of. At the same time ENFJs sometimes possess a quirky style, but they are well aware that this can be something which intrigues others. They might be drawn to more retro styles and even enjoy the idea of bringing these things back into popularity.

INFPs often follow whichever style is personally inspiring for them, and so they can certainly be retro. They don’t follow trends most of the time, instead they prefer to focus on things which they enjoy and feel connected to. If the INFP finds themselves more drawn to older styles, but they sometimes mix these in with new ones. INFPs just like to piece together things which are personal and feel like a representation of who they are. They also feel this way with older movies, shows, books and pretty much anything which inspires them.

ENFP
ENFPs can certainly be interested in things which are retro, especially since they are drawn to whatever inspires them most. ENFPs like to connect with the past while also moving forward towards the future. They just don’t like feeling stuck or stagnant and so for the ENFP being retro simply means bringing back these old styles and their favorite things in a new way. They go with whatever excites them most, and sometimes this means drawing towards their nostalgic side.

INTJs can occasionally be a bit retro, since they are drawn to whatever is more efficient and effective. Sometimes their style can also be a bit retro, since they don’t often care much about trends and what other people expect from them. INTJs can sometimes be more focused on the future rather than the past, but when it comes to certain styles and interests they are smart enough to realize that most everything retro becomes something popular once again. They don’t keep up with things because of a personal interest, instead they do it in order to be aware of things which might affect them in the future.

ENTJs are often forward thinking and business minded people. They like to keep themselves moving and believe in focusing on ways to become more efficient and successful in everything they do. When it comes to things which are retro the ENTJ often likes to pay attention to this in case these styles become trendy once again. ENTJs do care about how they are perceived but only because they know this can benefit them and their goals. They can sometimes be drawn to retro styles and ideas, but for the ENTJ it is important to keep moving forward.

INTPs are complex people who can be both innovative and retro at the same time. They can be drawn to certain things from their past, wanting to reminisce on these nostalgic experiences and ideas. INTPs also believe in looking to the future and working toward innovative and original ideas. They often combine these two styles and desires, being retro in some areas but also entirely new and unlike anything else when it comes to their own ideas.

ENTPs don’t like stagnancy but that doesn’t mean they cannot be a bit nostalgic at times. They enjoy looking to their past experiences and trends which inspired them once before. ENTPs often like combining these more retro styles and ideas with new thoughts and creations. ENTPs enjoy taking from the past but also being capable of innovation and original ideas. They bounce around with their personal styles and the things they are drawn to, and so sometimes this does mean being a bit retro.

ISTJs do care a lot about the past and so there are some things which might draw them to more retro ideas. While ISTJs don’t enjoy constant change, they also care about fitting into their community. If they are told that their more retro interests are going to alienate them, then they might reconsider. Often though, the ISTJs more retro styles lean towards the things which are classic and never truly go out of style.

ESTJs are often classic people who stick to the things they know and are comfortable with. While this can make them more retro with some things, they don’t like appearing outdated. ESTJs only stock with things if they are efficient and effective in accomplishing their goals. They also care about being perceived a certain way by others and so they won’t want to be seen as retro in a negative way.

ISFJs are often more classic minded people who can be drawn to things from the past. They might be retro in some situations, but ultimately ISFJs are aware of trends. They don’t want to be seen as odd or out of place and so they keep up with current styles. ISFJs don’t want to stand out in a negative way, but that doesn’t mean they aren’t capable of bringing back more classic things, especially when they know they will become popular once again.

ESFJs can certainly be drawn to the past and things which are seen as retro, but they don’t flaunt these things in a way which seems outdated. ESFJs are often interested in retro things but they are good at setting trends and making people realize how amazing these older styles or interests actually are. ESFJs like to be a combination of retro and current, but ultimately they keep current for the sake of their loved ones since they don’t really enjoy too much change.

ISTPs don’t necessarily find themselves interested in retro things as much as future ideas. They like to bounce around from different ideas and styles, exploring whichever excites them most. ISTPs enjoy bouncing around a lot, but this does sometimes bring them back to more retro ideas. For the ISTP it is about following whatever inspires and excites them in that present moment, rather than what others expect of them.

ESTPs do sometimes find themselves drawn to older more retro styles, but they are also rather trendy people. They might find themselves intrigued by these things that they see becoming popular once again. ESTPs are trendsetters most of the time, and can see where retro styles can come back into being trendy and desirable once again. They enjoy bouncing around to different things and don’t like being locked down to one simple style.

ISFPs do enjoy being trendy more than they enjoy being retro, but sometimes these things come together. For the ISFP it is best to explore things which inspire them in the present moment, and often these are the things which are popular or even a bit flashy. When the ISFP is interested in something retro, it can often become something they want to bring back into popularity and they are fairly good at doing this.

ESFPs are trendsetters but they also enjoy things which can be a bit retro. They aren’t afraid of exploring these more nostalgic styles or ideas, because they are often aware of how to make them popular once again. ESFPs are great at bringing things back, or at coming up with brand new trends to get people excited over. For them it is about hyping up these ideas and being confident in the way they present them.