Is a Sense of Honor Important to You, Based on Your Personality Type 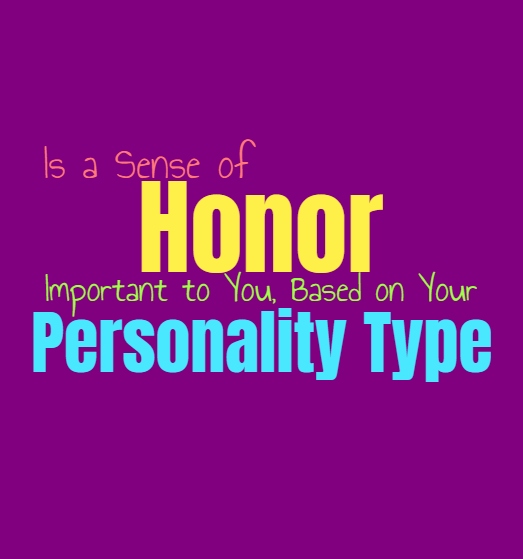 Is a Sense of Honor Important to You, Based on Your Personality Type

For the INFJ honor is deeply important, especially since they believe in upholding their morals and inner beliefs. For the INFJ upholding this sense of honor and even chivalry, is an important part of their choices. They believe in working hard to be someone others can look up to, and someone they can personally be proud of. INFJs care about doing the right thing and even hope to be capable of making a difference on a larger scale.

ENFJs definitely believe in upholding a sense of honor, since they care about doing what is right. ENFJs care about upholding these sense of morals and standards and strive to do what’s right. When they care for people they go out of their way to help them, and actually desire to make the world a better place when they can. For the ENFJ this sense of honor is something they often hold onto but realize might not be all that common in the world around them.

INFPs are strongly moral people and so they do believe in upholding a sense of honor. To them being honorable means always doing the right thing, and following a structure of integrity in their lives and choices. INFPs are always analyzing the things they do in hopes that they are doing what is right and good. They sometimes can be hard on themselves, feeling as if they could be doing better than they are. Ultimately being honorable is important to the INFP, more so than might be obvious from an outside view.

ENFPs do believe in being honorable and upholding a certain level of integrity in their lives. They feel it is important to always strive to do what is right and work towards making a difference in the world around them. While they don’t want to be seen as saints or perfect people, ENFPs do strive to help others and do what they can to make the world better. They often want to be someone who lives with a sense of honor and morals, and so they strive to do this.

INTJs do often uphold a certain sense of honor, in the sense that they want to follow what is right and be held in high-esteem because of this. INTJs follow their own sense of inner morals, which are actually more important to them than people realize. While they might follow logic more than emotions, INTJs still believe in striving to make a difference and help others. They simply don’t do this in an emotional manner, instead they are more practical and realistic about how they strive to make a difference and uphold a sense of honor.

For the ENTJ upholding a sense of honor simply means doing what is right and being someone others respect because of this. They do care about being viewed as an honorable or good person, always wanting to improve and grow. ENTJs work hard to be someone who others can respect because of their work-ethic, drive and even their generosity. While ENTJs might not be seen as sensitive or emotional people, they do care deeply about helping and caring for their loved ones. They might do this in practical ways, but the ENTJs loyalty is truly a strong part of their character.

INTPs might not care much about a typical idea of honor, or of upholding this ideal that others share. While INTPs care about helping others and have few limits to what they’ll do for loved ones, their idea of being honorable might be different than others. The idea of focusing on how others view you and of upholding these old-fashioned standards can seem a bit antiquated to the INTP. They care about helping others but they do this in a more logical and even practical mindset.

ENTPs might not really focus much on the idea of honor or of being someone who is seen as honorable. While they care about being respectful and of helping the ones they love, they don’t really see this is the typical idea of honor. For the ENTP it is best to follow their own path rather than to focus on what others might expect from them. They care about doing what they feel is right, but sometimes they want to break a few rules along the way which might not appear all that honorable in their own minds.

ISTJs do believe in upholding a sense of honor and respectability. They care about doing what is right and following a certain code of conduct. ISTJs do want to be seen as an honorable and respectful person, someone who is a valued member of their community. For them honor is important and being able to follow these rules and do what is right, even if it can be challenging at times.

ESTJs do value honor and doing what is right, especially since they care about being a valued member of their community. ESTJs don’t believe in just being someone who takes from others and doesn’t provide something valuable. People who are lazy and entitled can be deeply frustrating for the ESTJ, who believes in working hard in order to get things done efficiently and independently.

ISFJs do care about a sense of honor, and can often have a more old-school idea about what this means. They care about doing the right thing, but also about striving to make a difference around them. For the ISFJ being honorable means being respectful and polite towards others and working to uphold a sense of respect and consideration towards the world around them.

ESFJs do care about honor to some extent, since they believe in upholding a sense of right and wrong. For them certain ideals of honor can be a bit over the top, since they aren’t opposed to doing things their own way. Ultimately ESFJs care about these things but are much more focused on doing whatever it takes to care for their loved ones and make them happy. They often see honor and the ability to take care of others and give selfless to them.

ISTPs aren’t often focused on the idea of honor or of upholding these ideals. While they do care about others and have their own sense of morals, ISTPs don’t want to be weighed down by some idea of honor. They would rather keep to themselves and focus on doing what they believe in, rather than trying to live by someone else’s standards.

ESTPs do care about others and doing what is right matters to them, but they often have their own standards for this. ESTPs live very much in the present moment and so their idea of what is right can change from day to day. They want to live freely without feeling constantly weighed down by these choices, sometimes going against the rules or expectations of society.

ISFPs don’t like following rules or expectations and so sometimes their idea of honor isn’t the same as others. They do however, care deeply about doing what is right and have strong inner morals which they strive to follow. For the ISFPs it is honorable to follow their hearts and focus on helping others when they can. They don’t believe in being honorable in the sense of following rules and striving to gain the respect of others.

ESFPs do have strong inner morals and so to some extent they believe in being honorable. While these things matter to the ESFP, they are much more focused on living in the present moment. They don’t get hung up on obsessing over the details of their actions and instead just want to live with a sense of freedom and openness. ESFPs do care about being a good person, but being honorable can seem stuffy to them.